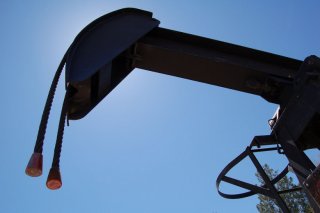 As President Obama made clear in his State of Union address on Tuesday, U.S. officials are reasonably confident that they have Iran just where they want it. They say the Iranian economy is reeling from a 60 percent drop in the price of oil, Tehran’s most valuable asset, which accounts for about 50 percent of its government budget.

The White House and its allies, in an ongoing effort to prevent Congress from passing new Iran sanctions, are now using this drop in oil to their advantage. They argue that oil markets are inflicting serious economic pain on the Islamic Republic, and that this should be enough to convince Iran to reach a nuclear deal.

It’s a compelling story, and useful to an administration that has threatened to veto new Senate legislation that would impose additional sanctions on Iran if no deal is reached by the White House’s self-imposed deadline of June 2015. The problem is that the story doesn’t hold up.

As it turns out, Ali Khamenei, Iran’s supreme leader, has lived for two years without full access to his overseas oil revenues. In February 2013, U.S. sanctions began locking up Iran’s oil profits through a little-understood maneuver, cooked up by lawmakers and Treasury officials. Sanctions legislation, designed to pressure Iran to relinquish is illicit nuclear program, required countries buying Iranian oil to pay for their purchases in escrow accounts in a handful of countries: China, India, Japan, South Korea, Turkey and Taiwan. The funds were then available to Iran, but only for purchasing local goods from those countries, or humanitarian goods from others. For example, Chinese refineries had to pay for the Iranian oil in yuan deposited into Chinese banks, and Iran could use the yuan to go shopping in China, as long as those shopping sprees didn’t involve the purchase of any sanctionable goods (for example, maraging steel for the development of advanced centrifuges).

The scheme worked well for Iran’s main oil buyers, who could still buy approved quantities of Iranian oil without sanctions penalties, as long as they were significantly reducing those purchases over time, and at the same time boost their exports. It didn’t work so well, however, for the Iranian supreme leader. He couldn’t repatriate any of the existing oil funds sitting in these overseas escrow accounts, estimated to be over $100 billion. The monthly oil revenues collecting in these accounts couldn’t be spent down fast enough because Iran couldn’t find enough non-sanctionable goods that it wanted to buy from those six countries (Europe, which was Iran’s preferred shopping zone, had become far more restrictive). In fact, the Treasury Department estimated that Iran could only spend about half of its recurring monthly oil revenues on imports in 2013, leaving the rest to pile up in escrow.

This all changed in November 2013 after Iran and the five permanent powers of the U.N. Security Council plus Germany reached an interim nuclear agreement. Under this agreement, beginning in January 2014, the P5+1 agreed to return to Iran $700 million per month from these semi-restricted oil escrow accounts. By June 30, 2015, when the current extension of the interim agreement is set to expire, Iran will have received over $12 billion from these escrow accounts to spend however it desires. In addition to these payments and other forms of direct sanctions relief, the interim agreement also put the brakes on the further escalation of U.S. sanctions that had plunged Iran into a deep recession, which was exacerbated by a plummeting currency and hyperinflation.

Iran’s economic crisis was America’s best leverage to get Iran to compromise on its nuclear program. The P5+1 sanctions relief has undercut that leverage. Iran’s economy has stabilized over the past year. The official inflation rate dropped from 40 percent to under 20 percent, the rial is no longer plummeting, and GDP is forecast at about 2 percent for 2014/2015 compared to negative 6.6 percent in 2012/2013. Even with oil prices plummeting, and the rial softening, Iran’s economy is still likely to grow in 2015/16, a view corroborated by the recent World Bank global report, which tends to be conservative.

The Supreme Leader is now in a position familiar to many Americans who lived through the 2008 U.S. financial crisis. They saw a sharp drop in the value of their 401k accounts and homes (semi-restricted assets), but found ways to stabilize their personal finances. Similarly, Khamenei is watching his oversees oil accounts drop. And while this may be disconcerting, his access to these overseas oil revenues remains limited. Meanwhile, thanks to Iranian president Hassan Rouhani, the economy is stabilizing.

To be sure, the drop in the price of oil will still be a drag on Iran’s economy. Growth is estimated to slow to 1 percent in fiscal year 2015/2016 after 2 percent growth in 2014/2015. The new Iranian government budget, pegged at $72 per barrel compared to $100 last year, still overshot the price of Brent crude by a wide margin (it’s now trading below $50). This will force to the government to cut government spending and increase tax revenues.

Despite all of this, the recent growth in Iranian non-oil export earnings and overall better management of the economy by Rouhani’s team will cushion further the drop in Iranian oil exports.

The Islamic Republic has weathered two difficult years of sanctions without full access to its overseas oil revenues. Today, in a strange twist of fate, these restrictions blunt the full impact of the drop in oil prices on Iran’s economy. If economic leverage has any chance of bending Khamenei’s nuclear will towards compromise, it will take crippling sanctions, not just falling oil prices, to once again reanimate the fear the regime felt in 2012 and 2013 when it narrowly escaped potential economic collapse. Hopefully this time around, President Obama won’t throw the supreme leader another financial lifeline.

Mark Dubowitz is executive director of the Foundation for Defense of Democracies and its Center on Sanctions and Illicit Finance where Jonathan Schanzer is the vice-president of research.