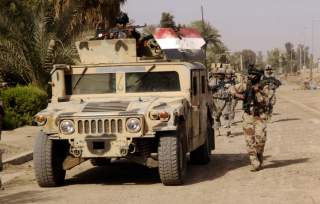 The nuclear negotiation with Iran is much in the news and there is vigorous analysis and debate in Washington on elements of a possible agreement and their implications for the United States, for the region and for the non-proliferation regime. However, Iran’s recent geopolitical gains in the region, especially in Iraq, and their implications, have received far less attention. This neglect is both surprising and dangerous.

The manner in which the United States and the West have conducted the war against the Islamic State (IS)/Daesh terrorists in Iraq has had many consequences—some unintended.  One result of the U.S. military approach—reliance on air power, a slow buildup of the Iraqi national army and limited assistance to the Kurdish Peshmarga—is a significantly increased Iranian presence in Iraq and growing domination by Tehran over the Baghdad government. Although Iranian influence started after the U.S. invasion in 2003, it has been on the rise since the pullout of American troops from Iraq in 2011. Today, Iran is the dominant influence in Iraqi national security decision making in Baghdad, and controls the bulk of the effective fighting forces in Iraq.

When several of its divisions collapsed ignominiously last summer, Iraq’s national army lost its stature as the country’s principle military force. It was feared that IS would maintain its momentum and advance toward Baghdad, Karbala or Najaf to threaten the Shiite dominated government, destroy the Shiite holy cities, or both. There were even indications of Daesh moving towards the Iranian border in Diyala province.

Seeing its interests in Iraq threatened by these developments, Iran seized the opportunity to further expand its influence and to dominate its oil-rich, Shiite-led neighboring state.

What did Iran do? It moved quickly and decisively in three ways to fill the security vacuum and respond to the panic caused by the collapse of the Iraqi military units.

First, Tehran dispatched its own senior security officials to help plan the defense of Baghdad and other towns and localities across Iraq. These officers, including General Qassem Suleimani, the head of the Quds force, participated in both defensive and offensive operations to implement the plans they helped develop with the ultimate goal of defeating IS. As reported in Western media, in the ongoing battle for Tikrit, Iranian officers led by Suleimani are leading the war to end IS’s control of the city.

The Iraqis have been surprised by Iran’s willingness to risk openly participating in the fight against IS. In the past, Iran would deny and cover up its role in providing arms to militias or directing militias it controlled to carry out specific operations in Iraq. Not this time. Indeed, a number of high-ranking Iranian officers have fallen in Iraq. Iran wants its own people, its regional rivals and the world to know that it is in Iraq and is fighting there. This is a significant development.

Second, Iran promptly sent weapons and reassurances of solidarity to Kurds, an action that had both practical and symbolic significance. Massoud Barzani, President of the Kurdistan Region in Iraq, has stated that Iran – not Turkey, which it had formerly regarded as its principal likely defender in the event of peril - was the first country to deliver weapons to his Peshmerga forces when Erbil was under imminent threat by IS last August. Iran also sent weapons to the Iraqi security forces including the military and police units and to Shiite militias, some of which have had ties with Iran for decades.

Third, taking advantage of Ayatollah Sistani’s appeal to the Shiite masses to mobilize against IS, Iran’s most effective strategy has been beefing up of its proxies: militias that have largely replaced the army on the frontlines. Those militias include Asa’ib Ahl Al-Haq (AAH), which is designated as a terrorist organization by the United States, Katai’b Hezbollah (KH), the Badr organization, and a plethora of subsidiaries under new names. These groups have fought IS and have become very powerful.

Iran has trained and armed them and Iranian officers are embedded with them. Now they control oil resources that they sell. In some areas they have openly taken over the functions of state security forces. Badr leader Hadi Al-Amiri and KH supervisor Abu Mahdi Al-Muhandis command significant forces and lead major operations. Both men have for years been on the payroll of Quds Force commander Qassim Suleimani and now continue to be his lieutenants.

Today there are more pictures of Al-Muhandis on public display in Baghdad than of Prime Minister Abadi. Al-Muhandis is a terrorist who participated in the 1983 attack on the U.S. Embassy in Kuwait. After hiding in Iran for years because of fearing capture by American forces, he is now Iraq’s Deputy Commander of the “Popular Mobilization” forces serving as the liaison between the militias and the Iraqi government.

The militias, including those closely linked to Iran, outnumber the Iraqi Army. According to General Martin Dempsey, more than two thirds of the 30,000 strong Iraqi force taking part in the fight to retake Tikrit are Shiite militiamen. This force, Amiri recently boasted, is advised by a hundred Iranian officers with extensive combat experience in places like Syria and Lebanon. And their weaponry is impressive. In addition to a wide array of Iran-supplied arms, they also have access to weapons and materiel provided to Iraq by the U.S. KH, for instance, was recently seen parading a U.S.-made Abrams tank.

Iran has achieved a great deal. In terms of protecting itself, with assistance from the militias it controls, it has pushed IS out of the neighboring Diyala province and has reportedly removed Sunni-Arab Iraqis from a zone of 40 kilometers along that border. General Suleimani and his lieutenants, including the militia leaders he controls, play a decisive role in determining the central government’s security policies. Iranian officials and officers enter Iraq and come and go to Baghdad at will without a diplomatic note or visas.

While PM Abadi and even some Kurdish and Sunni leaders welcome Iranian assistance in defeating Daesh terrorists, they reportedly are not altogether happy about the Iranian domination and the rise of militias and their implications for Iraq's future.

Abadi is boxed in and is dependent on Iranian material support and good will. The Iranians for their part do not entirely trust Abadi because of the time he spent in the UK, but they calculate that he is obliged to accommodate them because of facts on the ground. Meanwhile they also continue to keep former Prime Minister Maliki, who has refused to vacate the Prime Minister’s office and residence, in the background and are building a relationship between him and the militias.

Iran’s Revolutionary Guards have begun to translate their dramatically increased security role into economic benefit. There are allegations of Iranian Revolutionary Guards bypassing sanctions by transporting Iranian oil into Basra and mixing it with Iraqi oil before selling it.

Iran has also improved its standing with the Kurds. Iran’s prompt show of support in contrast to what many Kurds saw as a slow and weak response by Turkey and others during their moment of crisis, has caused the balance to shift in iran’s favor—although Turkey continues to play a vital role.  Not only has security cooperation improved, economic relations are changing too. Iran and the Kurds are moving towards strategic energy cooperation, with the Kurds importing Iranian gas and the Iranians taking Kurdish oil to their refineries near the Kurdish border instead of transporting oil from southern Iran to these refineries.

The Sunni Arabs of course have been Iran’s most determined opponents in Iraq. In the struggle against IS, Iran sees a historic opportunity to subdue their leadership and transform its relations with that community. IS initially capitalized on Sunni discontent with the Maliki government’s discriminatory policies and growing Shiite domination. Many Sunnis initially sided with IS, who arrived under the pretext of defending them and restoring their rights.

Some still back IS, but many have recognized too late that IS has greatly worsened their situation. But the Sunni Arabs have been unable to build an alternative leadership to unite them, take on IS, and represent wider Sunni Arab interests. Iran and hardline Shiite militias are working to disarm the Sunnis and to prevent their resurgence. The U.S. backed program to equip a capable Sunni guard fighting force has been slow to get underway. Hardline Shiites want strict control over such a force.

Iran, again capitalizing on a vacuum, is separately approaching some Sunni groups, offering to arm them and warning them not to count on the U.S., Turkey or Saudi Arabia. This message resonates, given Sunni frustration with the lack of timely support and ongoing apparent lack of an effective plan on the part of these three countries. Most Sunnis are not yet willing to embrace Iran, but some have come to believe that an understanding with Iran is necessary because only Iran can restrain Shiite militias from taking revenge on them. Others believe that Iran, while problematic, is effective and credible, unlike their regional rivals or even the U.S. The overwhelming Sunni Arab sentiment remains hostile towards Iran, but this can change.