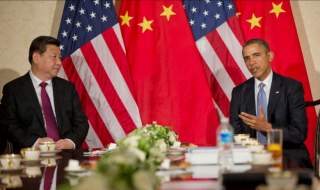 Two weeks ago, the United Kingdom applied to become a founding member of the Asian Infrastructure Investment Bank (AIIB), a financial institution proposed by China and designed to  finance large-scale infrastructure projects in Asia. The decision triggered a scathing—and unusually public—rebuke from London’s Atlantic ally, the United States, which had lobbied hard against the bank. ncouraged by the United Kingdom’s decision, France, Germany, Italy, and South Korea quickly followed suit, with Australia and possibly even Japan soon to follow.

The AIIB represents the latest focal point in an ongoing contest between the United States and China for control of the institutional order that prevails in Asia. At stake are the power, wealth, and influence that accede to states that can exercise outsized sway over the agenda and activities of these multilateral organizations. Unsurprisingly, Washington favors the rules and institutions—like the IMF, the World Bank, and the Asian Development Bank (ADB)—that it established and has led for decades.

For its part, Beijing prefers an order that acknowledges and amplifies its rising regional influence. China has won the latest round of this rivalry, in part because the United States failed to exert its institutional predominance to outmaneuver China and maintain a dominant influence over Asia’s multilateral bodies.

To be sure, no one involved in the AIIB mess wants to cop to realpolitik, and so each player has scrambled for fig leaves. But make no mistake—at its core, this dispute is part of a power struggle between China and the United States, wherein each works to develop or maintain institutions that can serve as channels for their influence in the most populated part of the globe.

Beijing’s recent success with the AIIB derives in large part from the advantages that third-party states like the United Kingdom can hope to gain by “defecting” to newer Chinese efforts.

The Politics Behind the Bank

Although the case for a new development bank is strong on its merits, Beijing has ulterior motives for establishing the AIIB. Existing financial institutions like the World Bank and the Asian Development Bank focus on concessional lending and poverty reduction programs, rather than infrastructure investment.

As the ADB itself acknowledged in 2010, the region needs almost $8 trillion in new infrastructure spending by 2020. Because the ADB could provide only a small fraction of that amount, Beijing was able to rally support around a new effort to meet this need.

But whatever the bank’s economic merits, China has advanced its creation for geopolitical reasons. Beijing has grown increasingly dissatisfied with its picayune voting rights at Western-dominated international financial institutions like the IMF, the World Bank, and the ADB, and the AIIB promises to give China a stake commensurate with its interests and economic heft. In particular, some banking experts have estimated that China will have a controlling stake in the new bank by virtue of its economic size, although the specifics have yet been determined.

The AIIB proposal also mirrors a variety of other economic plans supported by Beijing, including a BRICS development bank, the Free Trade Area of the Asia-Pacific, the Silk Road Fund, and a Shanghai Cooperation Organization development bank. Taken together, these plans signal a broader pattern of establishing international institutions poised to compete with the American-backed international order.

To justify its opposition to the bank, Washington has expressed concerns about its governance standards, and in particular, about the AIIB’s putatively weak environmental and anti-corruption safeguards. Until those standards are established at a suitably high level, Washington claims, it will try to reform the bank through external pressure.

Practically speaking, this makes little sense; London has argued persuasively that it is generally easier to reform institutions from the inside. As has become painfully clear, the AIIB doesn’t need American participation to get off the ground, so the United States has little external leverage to induce reforms. If it did join, Washington could wield its financial stake to introduce best practices. This power matters the most now, when the bank is writing up its articles of governance and deciding on its basic structure and rules of operation.

Instead, American misgivings about the AIIB stem from policymakers’ concern that China might command the regional bank as an instrument of state policy. Australia articulated this fear when it (initially) turned down an offer to join the bank. After an unusually personal intercession by President Obama, Prime Minister Abbott clarified that Canberra would sign on to only “a genuinely multilateral body” that “no one country can unilaterally control.”

“A Trend of Constant Accommodation”

Through its trendsetting behavior with the AIIB, London demonstrates why Washington may not always be able to count on its European allies when it comes to managing China’s rise. Henry Kissinger stated famously that “America has no permanent friends or enemies, only interests,” but he was only echoing another arch-realist, this one from Britain.

“[I]t is a narrow policy to suppose that this country or that is to be marked out as the eternal ally or the perpetual enemy of England,” remarked Lord Palmerston nearly two centuries ago. “We have no eternal allies, and we have no perpetual enemies. Our interests are eternal and perpetual, and those interests it is our duty to follow.”

In the past, those interests led the United Kingdom to cultivate a “special relationship” with the United States. London has long sought to ally with Washington to scuttle the rise of a dominant European superpower, checking first Wilhelm’s Germany and then Hitler’s before the Soviet Union emerged, heralding the “twilight struggle” against communism. Even now, the United States and the United Kingdom are close partners in the fight against the Islamic State.

Today in East Asia, though, British and American interests have begun to diverge.

For the United States, China presents the central geopolitical challenge of the century. Its rise imperils the American primacy at the heart of the postwar international order, a primacy that has enabled Pax Americana to flourish worldwide. As Ashley Tellis has insightfully articulated, this clash of interests is difficult to escape: “The United States seeks to protect its global hegemony—as it must, if it is to advance its varied national interests—while rising Chinese power is oriented toward eroding that U.S. primacy, which remains the most dangerous external constraint on Beijing’s ability to use its steadily accumulating power to reshape the extant political order to serve its own interests.”

But for the United Kingdom, the stakes in East Asia are not nearly as high. Unlike Germany or Russia, China does not pose a serious security threat to the United Kingdom. And although London benefits from the liberal economic order established and underpinned by American power, it is not clear that China would significantly depart from that model if given the opportunity. After all, China is powered by an export-oriented economy that has benefited disproportionately from the American-designed trading system, and the AIIB fits comfortably with the central liberal tenets of that system.

Given these low risks, the opportunity to gain a privileged institutional position in the AIIB may simply have been too good for London to pass up. Indeed, Washington was not far off the mark when it criticized “a trend toward constant accommodation of China” on the part of the United Kingdom. After all, London was notoriously restrained in its public support for the Occupy Central movement in Hong Kong (a former colony, no less), and Prime Minister David Cameron has clarified that he will not meet with the Dalai Lama in deference to Beijing’s wishes. Additionally, Chancellor Osborne has worked to make the City of London the first clearing house outside Asia for Chinese currency.

But the United States overreached in its criticism when it suggested that this “constant accommodation” is “not the best way to engage a rising power.” From the American perspective, perhaps not: Washington, after all, wants to preserve American influence over the system of international governance. From the British perspective, however, there is much to be gained—at relatively low risk—from working together with China.

None of this is to suggest that the U.S.-U.K. scrap marks the end of the special relationship. London and Washington continue to share important strategic interests, including containing a revanchist Russia and cauterizing the sanguinary Islamic State. They also have over a century’s worth of ties to fall back on, bonds that will keep the bilateral relationship on an even keel despite the occasional storm. Moreover, and like Washington, London has not been completely faithful to the pure dictates of realpolitik, and important strains of idealism continue to guide its foreign policy. Even Lord Palmerston preceded his realist maxim by urging the United Kingdom to give “the weight of her moral sanction and support wherever she thinks that justice is, and wherever she thinks that wrong has been done.”

In many respects, the AIIB commotion can seem mundane, the everyday carping of diplomats. After all, the bank does meet a pressing investment need in the Asia region, and despite all the American fretting, China will have greater difficulty using it as a tool of great power politics than many anticipate. But although the AIIB hardly sounds the death knell for the liberal international order, it illustrates Washington’s inability to react quickly enough in defense of the existing institutional order.