Chemical Weapons Are Here to Stay. Got a Gas Mask? 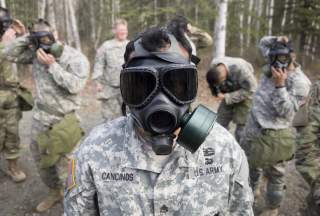 “Yesterday morning, we awoke to pictures, to children foaming at the mouth, suffering convulsions, being carried in the arms of desperate parents.” Nikki Haley’s recent call for UN collective action against Syria’s use of chemical weapons echoes a century-old refrain dating back to the World War I battlefield of Ypres in April 1915. Across the world since that war, many have woken up in the morning to discover the tragic fate of friends and family, victims of the increasing use of chemical weapons in warfare.

If chemical weapons are indeed immoral and a violation of the norms of warfare, why does the world hesitate to respond? On the other hand, if there is a codified ban against chemical weapons, why do perpetrators continue to use them with impunity? The answer to both questions is that the tenuous legal and moral taboo against chemical weapons is a figment of public imagination, and any attempts to formalize their illegality serve only to forestall the eventual normalization of chemical-weapons use in warfare.

Military generals, particular those who are politically astute, will not hesitate to adopt military strategies that provide their troops with an advantage over their enemies. Chemical weapons joined the long list of new methods of warfare, which included machine guns and submarines, at first abhorred by the public and eventually adopted and perfected. In the decades since World War I and the condemnation of poison gas by the 1925 Geneva Accord, world leaders have used these weapons against populations that were powerless to retaliate in kind. During the 1930s and ’40s, Italy’s Benito Mussolini used mustard gas against Ethiopia’s barefoot army, and Japan against underequipped Chinese troops and civilians. Hitler’s use of Zyklon B in World War II concentration camps further epitomized the use of poison gas against defenseless civilians and the international community’s powerlessness to intervene.

Chemical weapons were first used in the Middle East during the 1960s, when Egyptian president Gamal Abdel Nasser occupied Yemen to support a newly founded republic. Poison gas was used to target northern tribal militias taking shelter in an intricate network of caves. Fearing no similar retaliation from Yemeni tribesmen armed only with small arms, Nasser used chemical weapons to cover a withdrawal of Egyptian troops while still maintaining a defensive position in Yemen’s urban center. The United States, Europe, NATO, UN and Red Cross were hesitant to respond to Egypt’s use of chemical weapons, citing a litany of potential diplomatic, economic and political considerations far beyond the borders of South Arabia. The international community absolved itself from intervening, describing Egypt’s use of poison gas in Yemen as an intra-Arab conflict, thereby adding other limitations to global morality.

Seeing Egypt’s successful and tolerated tactics in Yemen, Iraq’s Saddam Hussein used chemical weapons against the Iranian army during the 1980s with the confidence that Iran was not in a position to retaliate and that international condemnation would not be forthcoming, a consequence of Iran’s diplomatic isolation during the war. The Halabja massacre, Saddam’s large-scale poison gas attack during a genocidal campaign against Iraq’s Kurdish population, was an extension of Iraq’s immunity from either retaliation on international condemnation.

Mussolini, Japanese Emperor Hirohito, Hitler, Nasser and Saddam were confident in their decision to use chemical weapons primarily because scientific detection and verification could take months, a consequence of both the difficulty of procuring sufficient sample sizes during the time of war and the lack of consensus on testing methods. And even if a sufficient number of neutral scientific observers provided unequivocal evidence of chemical warfare, these maniacal leaders were all but guaranteed that the international community would not take collective action against the aggressor. There are strict limits to morality in the realm of foreign policy.

Bashar al-Assad is keenly aware of this history. Chemical weapons provide his government with a clear advantage in the battlefield against a disparate adversary without similar capabilities. Added to the psychological power against civilian populations is the very fact that the world is now focused on Assad’s chemical warfare, to the exclusion of other nonchemical atrocities and the underlying reasons for the civil war in the first place. The alternative to this civil war is the complete genocide of Syria’s Alawite population, pushing Assad’s regime into a corner with few other options. If an opportunity presents itself again in the future for the advantageous use of chemical weapons, there is little doubt that either Assad or any future Middle Eastern leader would hesitate to use them again. Despite the Nobel Peace Prize–winning efforts of the Organization for the Prohibition of Chemical Weapons (OPCW), these morally detested World War I–era weapons have gradually been adopted into the modern-day arsenal. Which leaves us with only one question: do you have a gas mask?

Asher Orkaby is a research fellow in Near Eastern Studies at Harvard University and the author of Beyond the Arab Cold War: The International History of the Yemen Civil War, 1962–68 from Oxford University Press.