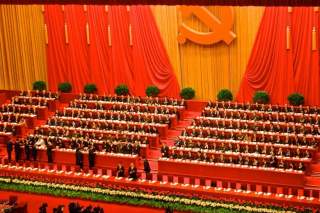 On October 8, Chinese media confirmed that Chen Wenqing became the party secretary of the Ministry of State Security (MSS), suggesting a transition is underway in the ministry responsible for intelligence and counterintelligence. Rumors in the overseas Chinese press indicated that Chen would be the next MSS chief, and that he would use the party secretary position to transition into running the ministry. The move can be read as another attempt by President Xi Jinping to rein in the security and intelligence apparatus as well as a sign that oversight of the MSS has not yet become institutionalized. Chen’s rise, though novel, brings a seasoned security professional to the MSS leadership and offers a good option for the soon-vacant minister position to guide the MSS through its evolution ahead.

Chen began his career in the Ministry of Public Security (MPS), China’s national police agency, which was also responsible for counter-espionage until 1983 and the creation of the MSS. According to his official biography, Chen switched over to the MSS in 1994, becoming deputy director at the Sichuan provincial state security department (SSD). Chen may well have been part of the original Sichuan SSD leadership, as the MSS stood up the department in the early- to mid-1990s. In 1998 during the now-disgraced Zhou Yongkang’s tenure as Sichuan party secretary, Chen took over leadership of the department. He held the position until 2002, when he moved over to head the Sichuan provincial people’s procuratorate. In 2006, Chen moved over to Fujian, where he served until 2012 as a both a secretary of the provincial commission for discipline inspection and as provincial deputy party secretary. Following the 18th Party Congress at which Xi Jinping came to power, Chen came to Beijing to become one of the deputy secretaries of the Central Commission for Discipline Inspection (CCDI), the central party agency that would spearhead Xi’s anti-corruption campaign.

Chen’s selection as party secretary and reported selection as a successor to Geng Huichang establishes (or would establish) a number of firsts for the MSS. The appointment marks the first time the MSS has had two CCP Central Committee members in its ranks. The minister, by virtue of his position, sits on the committee. If Chen does succeed Geng, as was rumored earlier this year, then he will become the first minister to serve on the Central Committee prior to assuming MSS leadership. Chen also would be the first former MSS officer to leave and return to the ministry at a higher level, an unusual career path for senior MSS officers. Minister Geng and the vice ministers for whom some limited biographical data is available, such as Lu Zhongwei and Qiu Jin, predominantly worked their careers at the ministry in Beijing, going out to the provincial departments to take charge for a year or two before returning to Beijing as vice minister of state security.

Moving Chen over from the CCDI appears to be yet another move by Xi Jinping to rein in the security services. Many believed them to be out of control or overly politicized while the now-disgraced Zhou Yongkang oversaw law and order on the Politburo Standing Committee from 2007 to 2012. Ahead of the leadership transition in 2012, the Central Party School headed at the time by Xi published a series of critiques of Zhou’s management of the security apparatus. These critiques suggested the security apparatus was undermining China’s development goals and that security needed to be downgraded from the Politburo Standing Committee to bring it into line with other government policy. These changes did occur, and, in 2013, Xi established a State Security Committee that further diluted the authority of Zhou’s old platform, the Central Political-Legal Committee. By the beginning of this year, two MSS vice ministers were purged for corruption and misuse of ministry resources. Chen is now the third CCDI deputy secretary moved to a ministry where corruption investigations have ousted a number of the top leadership.

A few preliminary concerns about Chen and the MSS’s future are worth raising at this point, because the ministry itself appears to be in a kind of structural limbo. The MSS, its leadership and the party center all face a number of choices about the ministry’s direction and priorities, such as whether its efforts should be directed externally or internally. The other intelligence bureaucracies are evolving in ways that open opportunities for, and compete with, the MSS.

In recent years, the dominant branch of Chinese intelligence has been the intelligence elements of the People’s Liberation Army (PLA). Not only is the PLA responsible for many of the cyber intrusions making headlines—such as those perpetrated by the five indicted by the U.S. Department of Justice—but their human intelligence operations have been behind the Chi Mak spy ring, Kuo Tai-shen’s penetration of the U.S. Department of Defense through James Fondren and Gregg Bergersen, and many of the most important Taiwanese spies, like General Lo Hsien-che. The PLA, however, wants to refocus its intelligence apparatus on the operational requirements of “winning informatized local wars,” which will reduce its capability to support civilian policy-making on foreign affairs.

Concurrently with these PLA developments, the politically-powerful Ministry of Public Security (MPS) is taking a greater role in internal security and counterintelligence. Beijing is now fully covered by surveillance cameras, according to recent media reports. In Beijing and other cities, these cameras—increasingly networked and aided by automated recognition of license plates and faces—belong to the MPS. Moreover, the MPS also has built a nationwide set of databases to collect data and automate task assignment to public security elements for tracking persons of interest as they travel through China. These resources offer a wealth of material for any investigation, especially given that the MPS officially re-entered the national security arena in 2012.

The logic of the MSS’s position would suggest that it is moving more and more into foreign intelligence, that is, the collection and analysis of intelligence related to foreign developments. The current minister, Geng Huichang, was the first MSS chief with a foreign affairs background selected for the position. Of the others, one began their career in the MPS, and the other two came from politics. None so far came to office as part of a powerful patronage network, suggesting other leaders intervened to keep the ministry weak and out of politics. Geng will have to step down soon, as the 64-year-old will have to retire no later than the 19th Party Congress in 2017. The National People’s Congress looming next March offers the earliest opportunity to replace Geng within the normal cycle of personnel appointments.

Selecting Chen Wenqing, however, would put both an internal security and politically well-connected official in charge, suggesting the natural impetus toward foreign intelligence operations might be stalling out. Chen’s connection to the CCDI also suggests the MSS would be lending its investigative resources to Xi Jinping’s anti-corruption campaign. The MSS may know where some of the bodies are buried; however, Deng Xiaoping created the ministry, at least in part, to move intelligence and counterintelligence away from the highly-politicized nature of elite politics.

Chen may be one of the best choices among all the others to steer the MSS through the next five to ten years. He has both experience at the working level of the ministry and in handling sensitive political issues at the highest levels. At age 55, Chen could serve many years before needing to retire and offer some stability. With his range of experience in public security, state security, the procuratorate and discipline inspection, Chen also might be a good choice to run the security apparatus in 2022. Recruiting from within the ministry as was done for current Minister Geng may not be a good choice, especially if the MSS needs to reorient its operations amid its more powerful rivals in intelligence. The two senior-most MSS vice ministers are Sun Yonghai and Dong Haizhou, but both are currently 62 years old. They would be limited to a short time in office before their mandatory retirement. Their selections probably would serve to keep the ministry weak politically, and out of internal party machinations in way that Chen’s selection might not.