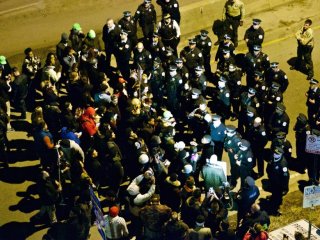 Well, well, well. So Donald Trump, the man who mocked Senator John McCain for being a prisoner of war in North Vietnam, went AWOL in Chicago last night because he was scared of a few protesters. The lesson from last night’s debacle is simple: Trump can be rolled. The man who prided himself on being a provocateur, who said he could deal with authoritarian world leaders around the globe, who thumped his chest and brayed about his own greatness, who talked about punching protesters in the mouth and wanting to see them carried out on stretchers, has now been revealed as a big phony. Not since Henry IV made his penance at Canossa has there been such a humiliating retreat.

Listen to this quote from a Bernie Sanders supporter who was at the rally that never rallied:

“I think it has revealed that Donald Trump is a coward,” Rob Conrad, a Bernie Sanders supporter in the crowd told the Daily Beast. “Donald Trump to me is a small man focused on small things. This colosseum full of Chicagoans tonight have shown him that there is a huge chunk of American that doesn’t like his game.”

It gets worse. Trump says that he was advised by the Chicago police not to hold the rally. The police, however, say that this is baloney. The Hill reports:

“CPD spokesman Anthony Guglielmi told the AP that the department did not recommend Trump call off the event and said they had sufficient manpower to cover the rally. Guglielmi said that the decision to shut down the event was made ‘independently’ by the Trump campaign.”

There is a long history of Republicans talking tough on racial issues but merely as a sop to the base. When George H.W. Bush ran for the presidency against Michael Dukakis, he deployed the Willie Horton ads. An independent committee called Americans for Bush disbursed $450,000 about Horton. The Illinois Republican State Central Committee, Sidney Blumenthal reports in his book Pledging Allegiance, issued a pamphlet, “All the murders and rapists and drug pushers and child molesters in Massachusetts vote for Michael Dukakis.” Don’t kid yourself. Election campaigns have been rough before Trump.

But George H.W. Bush was never a provocateur along the lines of Trump who has actively baited his audiences. When the Los Angeles riots occurred, Bush did not exploit them for electoral gain against Bill Clinton. He condemned “anarchy.” From the Oval Office, he delivered a measured speech that referred to a “mob,” “random terror” and the need to “restore order.” He said, “I will use whatever force is necessary to restore order. . . . I guarantee you this violence will end.” He also referred to the horrific beating of Rodney King, condemning it. Bush pointed to the racial divisions epitomized by the brutal assault of the white construction truck driver Reginald Denny, who was pulled from his International Road Tractor and attacked by what became known as the “LA Four.” Bush noted that other bystanders, some of whom were black, drove him to the hospital and “stepped in to help.”

When it comes to Trump, there will be more violence in the future because he’s trying to have it both way. The fact that he didn’t show up in Chicago will further incite larger and larger protests against him. All along it has seemed likely that violence would occur at the Republican convention in July, with protests both inside and outside the convention.

But the pace appears to have been accelerated by the developments in Chicago. Trump has been playing with fire. Now it turns out that he’s frightened of the conflagration he helped to whip up. Black Lives Matter has scared Mr. Big into silence. If Trump is too craven to face down a mob of militant protesters, how on earth does he expect to deal with foreign foes intent on challenging American power and influence around the globe?