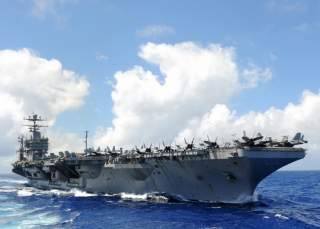 I've learned a great deal in my first year as CNO, and I've re-learned a few important things too.  One thing that’s been made clear is the timeless importance of clear-thinking and clear communication. A current example of this point, and one that is often mentioned, is the term “A2AD”.

To some, A2AD is a code-word, suggesting an impenetrable “keep-out zone” that forces can enter only at extreme peril to themselves.  To others, A2AD refers to a family of technologies.  To still others, a strategy.  In sum, A2AD is a term bandied about freely, with no precise definition, that sends a variety of vague or conflicting signals, depending on the context in which it is either transmitted or received.

For the Navy, everything must be appreciated through the crystal clear lens of enhancing our ability to conduct our mission. As discussed in A Design for Maintaining Maritime Superiority, the U.S. Navy will operate at sea and be ready to conduct prompt and sustained combat to protect America from attack and to ensure the nation can project strategic influence around the globe wherever and whenever necessary in support of our national security aims.

To ensure clarity in our thinking and precision in our communications, the Navy will avoid using the term A2AD as a stand-alone acronym that can mean many things to different people or almost anything to anyone.  We have to be better than that.

I advocate this approach for four reasons.

First, “A2AD” is not a new phenomenon. The history of military contests is all about adversaries seeking to one-up each other by identifying their foes at longer ranges and attacking them with ever more destructive weapons. As technologies change, tactics change to react to and leverage them. It is only relatively recently in our conversation about warfighting that we have discussed these trends as something new.  But history has much to teach us about maintaining perspective on these developments and on charting the path forward to address them. Think Nelson at the Nile and at Copenhagen, Farragut at Mobile Bay, Nimitz and Lockwood in the Pacific… this is nothing new. Indeed, controlling the seas and projecting power - even in contested areas - is why our nation invests in and relies upon a naval force in the first place.

The second reason is that the term “denial,” as in “anti-access/area denial” is too often taken as a fait accompli, when it is,  more accurately, an aspiration. Often, I get into A2AD discussions accompanied by maps with red arcs extending off the coastlines of countries like China or Iran. The images imply that any military force that enters the red area faces certain defeat - it’s a “no-go” zone!  But the reality is much more complex.  Achieving a successful engagement requires completion of a complex chain of events, each link of which is vulnerable and can be interrupted. Those arcs represent danger, to be sure, and the Navy is going to be very thoughtful and well prepared as we address them, but the threats are not insurmountable.

Third and related, A2AD is inherently oriented to the defense. It can contribute to a mindset that starts with how to operate from beyond the red arcs - an “outside-in” approach. The reality is that we can fight from within these defended areas and if needed, we will.  Inside-out, as well as outside-in, from above and from below - we will fight from every direction. The examples above show that this has been done before.

Finally, the A2AD problem is currently well understood - challenging, but understood.  And we can’t let A2AD distract us from new and unsolved problems lurking just around the corner.  If we fixate on A2AD, we are not looking far enough forward. We fail to consider the question of what is the next development that will take the contest and competition to a higher level.  For example, what must be done to stay ahead of our adversaries when anyplace in the world will be imaged on demand with real-time video?  This world will soon be upon us.

This lack of rhetorical precision has real consequences. Potential adversaries challenge us in different parts of the world. Those areas have different geographic features like choke points, islands, ocean currents, and mountains. Different geographies dictate a wide variety of concepts and technologies that enemies will use to fight in those different areas. This variety has a major impact on how naval forces will best seize and maintain the initiative. And while there may be some universal elements to the technologies and tactics we will use, there are just as many differences.  So we have to resist the temptation to oversimplify this conversation with a “one-size-fits-all” approach.  The specifics matter.

So what should we say instead? I am not proposing to replace one acronym with another. Since different theaters present unique challenges, a single term will just create further confusion. Instead, we will talk about the specifics of our strategies and capabilities, relative to those of our potential adversaries and within the context of specifics of their geography, concepts, and technologies.

The Navy’s focus must remain on maintaining maritime superiority, with a deep understanding of the interplay between tactics and strategy, against specific threats, in specific locations, to achieve that end. Superior equipment, more agile operating concepts, and most importantly high-performing teams, will lead us to better thinking and faster learning.  Those combine to make us a more capable and adaptive force that will outpace any adversary - especially in a world of rising complexity.

It must go beyond words - we must act.  And we are. We continue to up our game through training, experimentation, wargames, and new technologies. We are working hand-in-glove with our Marine Corps partners and sister services.  Our scientists, Sailors, and strategists are doing remarkable things to push today’s boundaries and develop new ways to maintain our edge. We are working more closely with the private sector, and reaching more deeply into the worlds of academia and industry, to bring the best ideas to the table - quickly.  And we are forging deeper partnerships with other like-minded naval forces around the world.

The pace of change is accelerating everywhere we look.  The margins of victory will be razor thin. More than ever before, maintaining our edge depends on clear thinking, coupled with decisive action, that is focused on executing our mission against today’s threats and against those in the future.  In this way United States Naval Forces will remain prepared to go wherever they need to go, at any time, and stay for as long as is necessary to project America’s strategic influence anywhere around the globe.

Admiral John Richardson is the 31st Chief of Naval Operations.