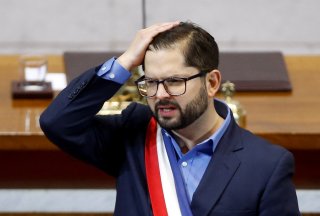 When leftist Gabriel Boric assumed Chile’s presidency in March, domestic security issues were far from the top of his agenda. He had campaigned on a platform of remaking the country, promising a far greater state presence in the areas of health, education, retirement, and environment. But whether he and his team have wished it or not, questions of public order have come to the forefront. In the forests of southern Chile, radical indigenous groups are mounting what increasingly looks like a low-grade insurgency. In Chile’s north, illegal immigrants have provoked the wrath of local residents. And in the capital, crime and disorder, in part politically motivated, are becoming ever more visible.

The rise of these issues has put stress on Boric’s coalition which ranges from the Communist Party and several new leftist groupings to fairly moderate figures of traditional social democratic stripe. Many have a deep suspicion of Chile’s military, which they associate with the 1973 coup which ousted Salvador Allende and led to the seventeen-year-long government of Augusto Pinochet. They similarly distrust Chile’s national police force, which battled protestors during 2019’s “social explosion” and has been accused of committing human rights violations in the process.

The problems of the indigenous inhabitants of southern Chile certainly predate Boric’s rise to power (a fact he and his team never tire of pointing out). The Mapuche people live in a mountainous region 400 miles south of Santiago which climatically resembles the U.S. Pacific Northwest. From the 1860s to the 1880s, Chile’s border expanded southwards into this region amidst fighting which resembled the contemporaneous Indian wars in the United States. (The area is still sometimes called “la frontera”—the borderland.)

As a result, the Mapuche were pushed into more remote areas designated as reservations. More recently, in 1979 the Pinochet government adopted a policy of privatizing communally held lands; as a result, much was sold off and ultimately ended in the hands of the large forestry companies which are now major players both politically and economically and whose contribution to Chile’s development and to government revenue is undeniable.

Since the return to democracy in 1990, there has been greater recognition of the grievances of the Mapuche people although solutions have been slow in coming. At the same time there has been an upsurge In Mapuche militancy, including claims over a large ancestral territory to be recovered termed “Wallmapu,” covering a large area of southern Chile and extending into Argentina. A Mapuche identity with its own flag and language has been cultivated. Parallel to this there has been increasing violence from radical Mapuche groups which have been responsible for arson, the destruction of logging vehicles and infrastructure, and blockades of roads, as well as attacks on farms belonging to non-indigenous residents and even on churches. Particularly shocking was the killing of a couple when their house was set on fire.

The previous government of President Sebastian Piñera sought solutions by entering into dialogue with non-violent Mapuche leaders and finding resources for social programs and the purchase of land to return to Mapuche communities. However, implementation was slow, amidst Chile’s other crises, including widespread social protests and attendant violence, the Covid-19 pandemic, and a related economic downturn. The atmosphere was further soured by the shooting of Camilo Catrillanca, a member of a Mapuche community, in a confrontation with police in 2018. Violent attacks continued to spike and in October of 2021, Piñera invoked a “state of exception,” periodically renewed, to allow the military to assist the hard-pressed police in maintaining security. While even non-violent Mapuche groups opposed this action, they themselves have offered no short-term solution to the violence.

Mixed in with the political violence was an upsurge in other criminality in the area. This has included marijuana growing as well as the theft of lumber, an activity that the forestry industry asserts is financing terrorism. Mapuche leaders claim that it is unproven that these crimes have been committed by tribal members and suggest that outside actors are involved.

The President Changes His Mind

In his presidential campaign, Boric asserted that the deployment of the military had been a failure that he would immediately reverse. (It seems fair to say that the major roads in the south were safer as a result of the state of exception, but that overall levels of violence had remained high.) Boric made good on his promise to end the state of exception upon taking office. Also his administration outlined a program (“Plan Buen Vivir”—Plan for a Good Life) that appears to be an intensified version of Piñera’s initiative with additional funding to purchase land and a range of programs in infrastructure, drinking water, and public health.

However, his administration got off on the wrong foot when his interior minister sought to visit the community where Catrillanca had died in a gesture of solidarity with the Mapuche. Gunfire forced her to retreat, and her poorly coordinated trip was sharply criticized both from the Left and Right. She got into further difficulty when she publicly used the term “Wallmapu” ahead of Boric’s first trip abroad, to Argentina, where this was criticized as infringing upon its sovereignty.

More seriously, following the withdrawal of the military, violence continued unabated, including the wounding of a truck driver on a highway which led to protests by angry truckers who briefly stopped traffic on the main north-south road, and the burning of a hotel belonging to the head of an association of victims of violence in the region. In a sharp retreat from his previous position, Boric announced plans for new legislation allowing for the return of the military but with more limited authority and under direct civilian control, while avoiding the declaration of a state of exception. This was too much for his supporters in the Communist Party and within the main “new left” party, and as a result, the legislation was never introduced. Instead Boric used his existing authority to send the military back in, though with instructions to stick to the main roads.

The episode has left him weakened politically, seeming unable to please the Right, which blames him for removing the troops in the first place; the Left which sees him as returning to old, repressive measures; and the Mapuche themselves. Their leadership has denounced the new state of exception and expressed broad suspicion of the Boric administration as well as of the ongoing Constitutional Convention which has promised to create a new deal, with far greater autonomy for Chile’s indigenous peoples. Violence has continued, including the May 24 murder of the driver of a lumber truck, himself a Mapuche.

In the North, Immigration is Unwelcome

But while the violence in the south has been the Boric government’s chief security headache, it is by no means its only one. It has also had to wrestle with continuing illegal immigration, especially from Haiti and Venezuela. Chile had received moderate numbers of immigrants in the nineteenth and early twentieth century with Italians, Germans, Croatians, and Arabs joining the descendants of initial Spanish settlers. However, immigration had tailed off after an initial post-World War II surge and the population mix in Chile, at the far end of South America, had until recently been largely stable.

However political upheaval and economic chaos in other countries began to reverse this in recent decades. In the 1990s, significant numbers of Peruvians began to appear. But it is the current Haitian and Venezuelan wave that has proven more complex. Initially, Chile had no visa requirement and the administration of Socialist Michelle Bachelet, now the United Nations High Commissioner for Human Rights, viewed the issue largely as a humanitarian concern. The more conservative Piñera administration tightened policies, but the flow of illegal entrants into arid northern Chile has continued.

The town of Colchane, near the Bolivian border, has become emblematic of the crisis, with its residents complaining of being overwhelmed by illegal immigrants. The government has promised to provide additional housing and social services to ease the burden of immigration on local communities.

Nonetheless immigration is not a comfortable issue for Boric. His right-wing opponent in the election, José Antonio Kast, had sought to use it in his campaign, even suggesting that a trench be dug along the Bolivian border to discourage illegal entrants. Boric and his team, while they assert that they are committed to enforcing the law, probably share the humanitarian instincts of the Bachelet administration. In his campaign, he called for a “human rights-based” immigration policy with easier transitions to permanent resident status. But since taking office he has said he is not in favor of a general amnesty (“perdonazo”).

His principal policy initiative has been to suggest a regional solution under which different Latin American countries would all agree to accept quotas of immigrants, pointing to similar undertakings within the European Union. The reality, of course, is that other Latin states have their own share of social and economic problems, and in many cases are also dealing with migratory flows, and his proposal has received little echo thus far. And as long as Venezuela and Haiti struggle, Chile, with a far more successful economy, is likely to remain a pole for immigrants.