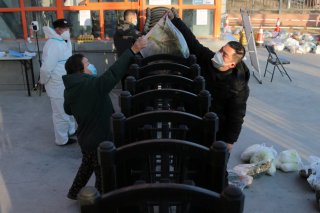 Xi’an residents who logged into their Hema fresh food delivery apps on the morning of Saturday, January 8 were greeted with a message that read: “We regret to inform you that in accordance with the government’s pandemic control demands, Hema Supermarket’s Daduhui store will cease offering online purchases today.”

Hema Xiansheng, which is owned by Alibaba, is one of only a few grocery stores that has been delivering food in some districts of Xi’an to the residents who have been trapped inside of their homes for weeks. The disruption to its delivery service came one day after authorities accused the local branch of the supermarket of unsanitary operating conditions. Various branches of Hema’s supermarkets across the country have been accused of sanitation violations throughout 2021.

According to one Weibo user, “It’s shameless. During the outbreak in Xi’an, the only company that provided us with food is again being investigated.”

Xi’an has been closed down since December 23. Residents cannot leave their homes for any reason except for getting mandatory Covid-19 tests. Not even grocery shopping is allowed. Now, with one of the few delivery apps shut down, residents must rely even more on the government for food deliveries.

Zhang, a graduate student living with her grandmother, said that “in some districts, the government delivers quickly. In other districts, it takes longer. We received our first delivery two days ago.”

Having stocked up on food before shopping was banned five days into the lockdown, her family is not pressed, but others have had to ration. One resident told MK News that they are living on bread but only have one piece left. Even worse, guards outside a residential community beat a man who was trying to deliver steamed buns to family members.

Residents of the massive apartment complexes and neighborhoods where most Chinese urbanites live have been bartering and offering extra food to their neighbors. Zhang shared a message from her neighborhood’s group chat in which one resident offered to support their less fortunate neighbors. “Is anyone lacking food? My company provided me with more food, so now I have too much. I can’t eat it all. I will provide it to anyone for free. There are two crates. Or you can look at the pictures, and if there is food you need, you can come take it,” the message read.

“Xi’an has so many foreigners,” Kang said. “I don’t think they thought about this from the start.”

To resolve the problems, communities and small businesses organize on WeChat. An ethnic Chinese citizen of Chaoxian (Korean) ethnicity who runs a Korean market in Xi’an has been working around the clock to package and ship food to those who make their orders in the group chat. Lacking an official app, food from the small market is put in plastic bags and delivered by motorbike.

“It is incredibly frustrating and crazy,” Kang said. “Can’t go to work. Can’t go out. Can’t leave the country. They are implementing policies without consideration for human rights.”

Kang’s views echo those of many Chinese “netizens” who have been complaining on Weibo, China’s microblog, about the problems they have faced. In the most extreme cases, harsh enforcement of testing and social distancing rules has resulted in citizens being beaten and denied medical treatment, in some cases resulting in miscarriage and death.

Overall, the news coming out of Xi’an in fragmented pieces paints the picture of a disorganized local bureaucracy whose thinly-stretched resources are unable to handle the task of providing for 13 million people currently in quarantine. Officials at the Gaoxin hospital were fired after the hospital denied entry to a pregnant woman who miscarried. Many local Xi’an officials were removed and disciplined by the government, although those reprimands, coming just as the lockdown began, appear to be over their failure to slow the outbreak, rather than because of their implementation of the lockdown.

The food distribution programs in Xi’an have been disjointed, coming from multiple departments, and have been applied differently in different parts of the city. Early on in the lockdown, the only company that some consumers were able to purchase vegetables from was jacking up prices. Yingxiong zhi Cai, a grocery provider, sold crates of vegetables for over $50, prompting outrage and calls for an official investigation.

A financial blogger living in Xi’an with over 217,000 followers criticized the local government in a since-removed Weibo post and praised Hema, saying, “in the quarantined city, it solved many family’s food problems. … It is worthy of an award!”

Many Xi’an residents have been fortunate enough to have sufficient food and face nothing worse than ongoing boredom. For some, the weeks-long break from work has been a respite.

“In fact, I am very satisfied with my life in lockdown,” one Korean engineer working in Xi’an told me. “I have a lot of time, so I study what I have wanted to study and spend time watching movies and dramas that I have wanted to watch. I have been busy while I have been in China, but it is better to fill the one month quarantine period with time for me.”

However, “Many people who came to work with me are frustrated,” he added.

Zhang, who is Chinese, turned on her computer yesterday to watch High Kick (거침없이 하이킥), a sitcom that broadcast on Korea’s MBC in 2006. Zhang is a big fan of K-dramas, and she estimates she spends up to ten hours a day watching them during the lockdown.

“Besides eating and sleeping, I’m only watching TV,” she said. Youku, one of China’s largest streaming services, which is also owned by Alibaba, is offering its library of films and shows to Shaanxi residents free of charge during the lockdown.

New reported cases of coronavirus in Xi’an have declined dramatically since January 1. On January 8, there were only thirty cases reported in the entire province of Shaanxi. The local government has celebrated the development as a sign of its own success. A bulletin posted by Shaanxi’s government-owned broadcaster hailed the “turn for the better” and urged people to “believe that before long we can return to ordinary productive lives.”

How long “before long” means is anyone’s guess. Chinese New Year, a significant date on the calendar, comes February 1. The last major lockdown of a city in 2021, that of Shijiazhuang, lasted twenty-four days. But guidelines have loosened slightly in some areas.

“In our residential community, we were getting tested every two days,” Zhang said. “But now, because the situation is turning around, we have gone five days without a test.”