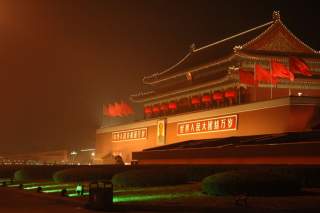 “In my struggle against corruption, I don’t care about life or death, or ruining my reputation,” said Xi Jinping at a closed-door session of the Communist Party’s Politburo on June 26. China’s ambitious leader also referred to two armies in the country, one of “corruption” and the other of “anticorruption.” These forces, according to him, “are at a stalemate.”

The quotations, reported by a Central Committee member, look accurate and are consistent with reports that Xi gave a “shockingly harsh” speech on his so-called corruption campaign then. The South China Morning Post, the Hong Kong newspaper, noted that a source familiar with Xi’s speech confirmed the report. Evidently, there is severe infighting in senior Beijing circles.

Until recently, the overwhelming opinion was that Xi had quickly consolidated his political position after becoming Party general secretary in November 2012. For instance, last year, the New York Times and the Wall Street Journal, on the eve of the “shirtsleeves” summit between Xi and President Obama in early June, reported that White House officials had determined that he had asserted control over the Party apparatus and military much faster than anticipated.

Since then, the wide prosecution of both high- and low-level officials—“tigers” and “flies” in Communist lingo—has been viewed as proof that Mr. Xi dominates the political system. “So far at least, there’s little sign of resistance,” wrote the Wall Street Journal’s Andrew Browne early this month.

Browne’s timing was especially unfortunate. Just as his article was posted, reports of Xi’s Politburo speech began circulating in China. Despite the melodramatic tone—Xi’s words evoke Zhu Rongji’s famous comment in 1998 about leaving a casket for him as he had no fear of dying in his fight to win “the public’s trust in our government”—the current leader’s words indicate substantial resistance and dissension at the top.

There is so much resistance and dissension that this time is, as Renmin University’s Zhang Ming notes, a make-or-break moment for Comrade Jinping. For one thing, it is a sensitive time of leadership transition, when authoritarian systems are generally at their most vulnerable, and China is at a particularly fragile point. The transfer of power from Fourth Generation supremo Hu Jintao to the Fifth Generation Xi is the first in the history of the People’s Republic not engineered by strongman Deng Xiaoping. Deng, after disposing of transitional figure Hua Guofeng, chose himself, and then he selected both Jiang Zemin to succeed him and Hu to follow Jiang. Deng was in no position, however, to make a selection for the top spot in the post-Hu team.

China experts, even those not friendly to the regime, have pronounced that this transition is governed by the Party’s internal rules and procedures and has thus proceeded in a “smooth” fashion. Yet there were, despite the expert opinions, bound to be severe problems. In a one-party state, even one as bureaucratized as China, regulations change with the whims of leaders, and in this Hu-Xi transition, there have been a number of surprises.

There has been, for instance, the unexpected reduction in the size of the Politburo Standing Committee, the apex of political power in China, from nine members to seven. This is proof by itself that Chinese transitions are exercises in raw power and not law-based selections. Moreover, the two-week disappearance of Xi in September 2012— attributable, according to a report in the Washington Post, to injuries he sustained when a colleague hit him in the back with a chair during a meeting—is an indication of severe disagreements. And there was the series of coup rumors before the transfer of power, of gunfire in the center of Beijing, among other reports. “If China runs into trouble, it will come from inside the Communist Party,” Deng once said.

Perhaps the most important reason why this is a do-or-die moment for Xi is his outsized ambitions. Every leader of the People’s Republic has been weaker than his predecessor—except for the current one. Mr. Xi obviously has nurtured hopes and dreams Mao-like in their scope and grandeur, and that has led him, more than his three immediate predecessors, to eliminate political opponents. Under the guise of a campaign against corruption, he has promoted what John Minnich of Stratfor has called, “the broadest and deepest effort to purge, reorganize and rectify the Communist Party leadership since the death of Mao Zedong in 1976 and the rise of Deng Xiaoping two years later.”

So far, Xi’s efforts have been sweeping, taking down at least thirty-six officials of vice-ministerial rank or higher in his first twenty months in power. The Party’s Central Commission for Discipline Inspection said that last year it punished 182,000 officials. Among Xi’s collection of felled tigers are Bo Xilai, a charismatic Politburo member; Xu Caihou, once one of the country’s most powerful generals; and Zhou Yongkang, who stepped down as the country’s internal security czar in 2012.

The announcement of the investigation of Zhou, made July 29, marked what some think is “an end to the first major phase of Xi’s anticorruption campaign,” yet it is far more significant than that. The unprecedented prosecution probably marks the last days of a two-decade period of stability, a time that permitted China to recover after Mao’s disastrous twenty-seven years of rule.

The investigation of Zhou violates the Party’s generation-old taboo prohibiting prosecutions of members or former members of the Standing Committee. If leaders knew they would not be hunted down, as they were in Mao’s Cultural Revolution, they would be willing to withdraw gracefully after losing political struggles. In other words, Deng Xiaoping, Mao’s crafty successor, reduced the incentive for political figures to fight to the end and tear the Communist Party apart. As such, the prohibition was an important element in restoring calm after Mao’s zany, decade-long campaign.

Xi Jinping, however, is reversing the process and upping the stakes, something evident in the probe of Zhou and the life imprisonment of Mr. Bo. Those are signs China is returning to a period that many thought had long passed, as Xi rejects the politics of the era dominated by Jiang Zemin and Hu Jintao. During that mostly permissive span, powerbrokers tried to maintain a delicate balance among the Party’s competing factions. Xi’s motto, however, is “You die, I live.”

As Renmin University’s Zhang Ming says, “combat” between Xi and others “has been white-hot.” The question, however, is whether the fighting subsides or intensifies in the months ahead.

Veteran China watcher Willy Lam, for one, thinks the worst is over. He cites a piece by Deng Yuwen, a former deputy editor of Study Times, the Central Party School journal, in the July 26 edition of Ta Kung Po, a Hong Kong newspaper often reflecting Beijing thinking. “Many people want to know if other ‘big tigers’ or ‘old tigers’ will be ensnared,” Deng writes. “The possibility of this happening in the rest of the first five-year term is close to zero.” He believes Xi reached a deal with Jiang Zemin, Hu Jintao, and other Party heavyweights to permit Xi to do whatever he wanted with Zhou Yongkang, as long as he did not go after either them or their kids.

Not everyone agrees that such a deal exists. At the moment, there are a multitude of predictions as to what will happen, but in all likelihood, Deng Yuwen’s is wrong.

First, Xi is said to be using his corruption campaign—in reality a political purge—to clear out opposition to fundamental economic restructuring. If that is true, then the bargain described by Deng Yuwen is most unlikely. After all, any agreement with conservative figures, who would be disadvantaged by change, will leave them in a position to block most reforms. Xi Jinping, however, is a figure who obviously craves a legacy—the man who saved the Communist Party and fulfilled the “China Dream”—and it’s unlikely he would essentially trade his future away. To get what everyone says he wants—or at least to get supreme power—he needs to defang all competitors, all the tigers still on the loose.

Second, everyone, it seems, is losing patience with Xi or is being disadvantaged by his policies. This means, as a practical matter, that he has a big incentive to do something dramatic to regain support in society, like bag the biggest tiger of them all, Jiang Zemin. Beijing insider Li Weidong believes Xi will target Jiang’s patronage network and then make sure the other nineteen former Standing Committee members will be so intimidated that they submit to his will.

Third, even if there is such an arrangement between Xi and the old tigers, it cannot last. Xi undoubtedly understands that he has created expectations among the Chinese populace that he now has to fulfill. People demand that the venal and greedy be brought down, to see the breeze blow away “the evil air,” as one long-time friend of Xi told journalist John Garnaut. So the corruption campaign is not Xi’s to trade away, even if that was something he wanted to do. In the increasingly complex Chinese society, there are new stakeholders who cannot be ignored.