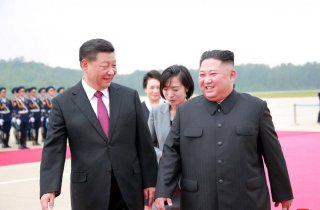 Even before America and China’s tit-for-tat trade war verged upon a coronavirus-infected Cold War, Beijing routinely accused Washington of keeping China down. Since the end of the original Cold War, Beijing has cited incidents ranging from the accidental 1999 NATO bombing of the Chinese embassy in Belgrade to the domestic U.S. protests over Tibet during China’s hosting of the 2008 Olympics as evidence of America’s bias against China. As Chinese President—then-Vice President—Xi Jinping remarked in 2009, “there are a few foreigners, with full bellies, who have nothing better to do than try to point fingers at our country,” surely having America in mind.

As Cold War II appears to dawn, it is imperative to dispel the nationalistic Chinese assumption of an American containment policy against China during and after Cold War I. To do so, a couple of key questions are worth asking: first, who has been the biggest beneficiary of the American-led liberal international order? The answer is not Europe, nor the United States—it is China. Second, who has been the principal guarantor of that order? The United States. No matter how many times Chinese officials parrot a version of the line that the United States has kept China down—and despite the seeming confirmation of that narrative by the Trump administration’s hawkish stance—make no mistake: America has been China’s greatest cheerleader since 1971. For without American support, it is hard to imagine China’s remarkable rise happening as swiftly as it did, or even occurring at all.

Chinese, rightly proud of their reemergence as a great power, take issue with such analysis but consider the context for China’s rise. As David Stilwell, the Assistant Secretary of State for the Bureau of East Asian and Pacific Affairs, stated in an illuminating speech last December, “China was not just the indirect beneficiary of general American efforts to sustain a liberal world order. Support for China’s development was deliberate, direct and specific.”

First, the integrity of a unified Chinese state was not inevitable. The Sino-American alliance to roll back and defeat Japanese imperialism—and the American effort to quell its colonialism and reshape it in its image—removed China’s most existential threat. As for China’s next existential threat, when the Sino-Soviet border dispute escalated in 1969, Soviet leaders pondered a strike on Chinese nuclear facilities, a blow that could have irreparably set China back despite Mao Zedong’s overconfidence to the contrary. Yet the Richard Nixon administration made it clear that it would not tolerate such a move, helping to deter Moscow.

The Jimmy Carter administration, which formally normalized U.S.-China relations in 1979, authorized in 1980 the sale of nonlethal military equipment to Beijing. The Ronald Reagan administration ramped up this security assistance, allowing sales of air, ground, naval, and missile technology in its 1981 National Security Decision Directive (NSDD) 11, aiding China’s civilian nuclear program via NSDD 76 in 1983, loosening restrictions on technology transfers to China via NSDD 120 in 1984, and announcing in 1986 the “Peace Pearl” program to modernize Chinese F-8 fighter jets.

All told, the United States sold China hundreds of millions of dollars’ worth of military hardware and technology by the mid-1980s, advancing what Washington called in NSDD 120 a strategy “to help China modernize, on the grounds that a strong, stable China can be an increasing force for peace, both in Asia and in the world.” In short, America provided a fragile China with a Pacific security order within which to fix its own internal problems and become a great power once again.

Second, despite Chinese protestations to the contrary, American policymakers systematically integrated China into the U.S.-led liberal international order following World War II to Beijing’s great benefit. Chinese policymakers lament the supposed fact that they were absent from the table that decided the shape of the postwar order. On some, if not most counts, they are correct. But even though China did not have the geopolitical say and sway it craved over the past three-quarters of a century, the United States included China at critical junctures.

When the victors of the War crafted the composition of the great-power body to deal with the most pertinent issues of international security, the UN Security Council, China was provided with a permanent seat. China gained membership in and aid from Bretton Woods institutions, and, most crucially, China’s road to accession to the World Trade Organization in 2001 was paved by Uncle Sam. Not to mention the aforementioned American security guarantee, and the 1971 opening to China’s elevation of Beijing as a key security partner to bolster the liberal order against the Soviet Union.

By the time that the George W. Bush administration’s Deputy Secretary of State Robert Zoellick argued for China to become a “responsible stakeholder” in the international system, the emphasis was on “responsible,” because China had for decades already reaped the rewards of its stakes in the company called globalization, whose constitution was the liberal international order.

Third, China’s stakeholder status allowed it to become the workshop of the world, creating human history’s greatest development story. Of course, credit for the success of China’s export and investment-led model should be given first and foremost to the Chinese leaders and citizens who propelled the Chinese economy to where it is today. Yet a historian documenting China’s economic miracle would be remiss to ignore the role America played in enabling double-digit Chinese growth rates for decades.

China featured prominently in U.S. and multilateral development aid programs. The Carter administration helped China gain World Bank membership in 1980, allowing Beijing to become a recipient of the body’s loans the next year. It went on to become the Bank’s second-largest beneficiary, overall receiving some $62 billion as of last year. China’s World Trade Organization accession in 2001 was preceded by the Carter administration’s granting of most-favored-nation status to China in 1980, catapulting it to become the world’s largest trading nation by 2012.

Bilaterally, aid to China via the U.S. State Department and the U.S. Agency for International Development totaled $417 million between 2001 and 2015, and through the private sector, Chinese state-owned firms raised tens of billions of dollars thanks to U.S. policy allowing for domestic public stock listings. This happened despite Chinese companies not meeting basic regulations, and with the help of U.S. investment banks.

As early as 1978, the U.S. government directly supported the institutional development of Chinese energy, education, space, agriculture, medicine and public health, geosciences, and commerce through President Carter’s Presidential Directive 43. Western economists, at China’s invitation, advised Chinese policymakers throughout Deng Xiaoping’s reform and opening-up period. And the United States welcomed Chinese students to its shores, amounting to 100,000 students in 1987, 270,000 in 2015, and 370,000 as of last year—many of whom returned home and drove forward Chinese economic growth and technological advancements.

Even what is considered to be the Massachusetts Institute of Technology of China, Tsinghua University, was created thanks to U.S. President Theodore Roosevelt agreeing in 1908 to lower China’s indemnity payment to America (which was a member of the Eight-Nation Alliance that quelled the Boxer Rebellion and imposed reparation payments on the Qing government) by nearly $12 million. That sum funded a school to prepare Chinese students to study in the United States, founded in 1911 as “Tsinghua College,” which became what is now the top-ranked university in China and all of Asia.

Was America’s cheerleading worth it? Especially during the administrations of Presidents Bill Clinton through Donald Trump, China has engaged in mercantilist economic and trade practices at the severe cost of the American economy—not least the country’s Rust Belt areas that voted disproportionally for Trump. It is no wonder that one analysis of the 2016 U.S. presidential election found, “on average, a one-point increase in the indicator of import competition from China is associated with a 2.9 percent increase in support for Donald Trump vis-à-vis the county’s average support for Republican candidates over the past twenty years.”

It should go without saying that U.S. foreign policy begins at home—especially in light of current unrest over domestic racial and economic inequalities—and that American competitiveness must come from smarter domestic investments, not simply by blaming and sanctioning foreigners. But supposedly robust features of the liberal order such as the World Trade Oorganization’s dispute settlement system consistently failed to change unfair, nonreciprocal Chinese trade practices, thereby exacerbating the hollowing out of rustbelt America.

Thus the Trump administration’s trade war against China has been but simply a culmination of decades’ worth of American grievances, not an out-of-the-blue, drastic policy shift launched by a uniquely angry, trade deficit-obsessed president. As Stilwell puts it, “our posture today is based on disappointment that Chinese Communist Party leaders decided to respond to our good faith with such aggressive and consistent bad faith.” Reciprocity, not containment, has been the goal.

Any Chinese policymaker seeking to mend the U.S.-China relationship must reckon with reciprocity before dismissing Washington’s stance as unreasonable. For if Xi is serious about his idea of a peaceful, cooperative “new type of great power relations” to define U.S.-China ties rather than Cold War II, a good-faith Chinese expression of gratitude for America’s history of cheering for China would go a long way in making his dream a reality.