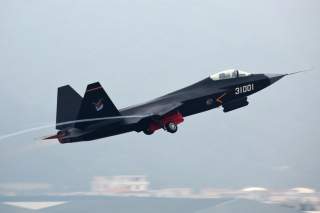 Chinese president Xi Jinping will arrive in Washington on Thursday for his first official visit as president of the People’s Republic of China. On Friday he will be accorded full state honors including a 21-gun salute on the White House lawn and a formal banquet at the White House. This will not be because China is an American ally or because the United States respects and accepts China’s repressive political system, but because China is a world power.

Military power is still the sine qua non for stature in the international system and, according to the Stockholm Peace Research Institute, China’s defense spending is now the second-highest in the world after the United States. Based on SIPRI estimates, in 2014 China spent more on defense than Russia, Britain, and France combined. As the massive military parade in Beijing on September 3 demonstrated, China’s military, the People’s Liberation Army, has been modernizing rapidly over the past two decades. What was once a peasant army is now equipped with tanks, airplanes, and missiles that are in many cases comparable to those of the world’s most advanced military powers.

China’s growing military power is a concern for the United States. The United States has security commitments to several countries with whom China has territorial disputes. These include the independent island nation of Taiwan, which Beijing claims should be part of the People’s Republic, and Japan and the Philippines, both of whom claim small islands that Beijing regards as Chinese territory.

Actual war over these territorial disputes may be unlikely, but perceptions of relative military power affect the behavior of nations in the international system. As China’s military power grows relative to that of the United States, it is likely to become more assertive toward these disputes, particularly since China would enjoy the “home field advantage” in a conflict over them, as they are all relatively close to China whereas the United States would have to project its military power across thousands of miles of ocean. Indeed, we are already seeing China be more assertive toward its territorial claims in the South China Sea.

Given that China’s military budget continues to grow rapidly year after year, whereas U.S. military spending has been shrinking since 2010, how can the United States maintain its strength in Asia and deter China from aggression or adventurism? One answer, which the Defense Department is already pursuing, is a renewed to make sure that the U.S. military maintains its technological edge over China.

But fighting power depends on more than just weaponry. It is a composite function of the quality of a military’s doctrine, organization, equipment, people, training, logistics, and organizational culture. The Chinese military is being provided with increasingly modern equipment, its officers are increasingly being recruited from the graduates of China’s civilian universities, and the quality of the PLA’s training is steadily improving, but important weaknesses remain. Most significantly, the PLA’s doctrine for fighting what it calls “informationized local wars” requires a nimble, decentralized and flexible organization and an organizational culture that encourages initiative and risk-taking. The PLA, however, is just the opposite. It is highly centralized and highly rigid and its organizational culture discourages initiative and risk-taking.

The weaknesses of the PLA provide a clue to the secret to maintaining the U.S. military edge over China. As China becomes wealthier and more technologically advanced, the technological advantage of the U.S. military will inevitably diminish. The most important priority for the U.S. armed forces, therefore, should be to ensure that they continue to have a decentralized, flexible organizational structure and culture that encourage initiative, creativity, and risk-taking at all levels. These are qualities that are difficult for the militaries of authoritarian countries to uphold, and China’s ruling Communist Party is particularly afraid of a military that can act independently of the central leadership.

China is not the United States’ enemy, but neither is it our friend. The two world powers have interests that sometimes are in accord but conflict in key areas that are not negotiable for either country. War with China is not inevitable, but it is always better to deal from a position of strength than from a position of parity or weakness. Maintaining our military advantage over China is the key to protecting our interests in peacetime as well as war.

Roger Cliff is a Nonresident Senior Fellow at the Atlantic Council. His book, China’s Military Power: Assessing Current and Future Capabilities, will be published by Cambridge University Press on September 25.