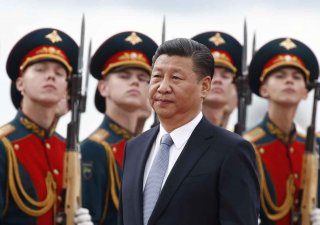 If the Biden administration wants to recover from its disastrous performance in Anchorage last week, it should send a message to the Chinese by accelerating the pace of weaning U.S. defense contractors from their reliance on the export of rare earth minerals from China. Eighty percent of all U.S. rare earth supplies come from China.

That would send the message that the United States will not let itself be pushed around on the world stage.

Rare earths are a series of metals on the Periodic Table similar to Scandium and Yttrium that are heavily used in the aerospace industry.

Having supplies cutoff could have a serious negative impact on U.S. defense readiness. For example, the high-tech F-35 stealth fighter contains 920 lbs. of these elements. Each Arleigh Burke-class AEGIS destroyer has 5,200 lbs., and a Virginia-class submarine has 9,200 lbs.

In 2019, China threatened to cut off the flow of these elements, used in flat-screen panels and other electronic components, to U.S. defense contractors.

The Chinese Communist Party (CCP)-linked Global Times noted earlier this month that the Chinese government didn’t have immediate plans to shut off the flow; however, a source said, “But there could be an export restriction in the future,” particularly in case of war.

Recent instability and Chinese leader Xi Jinping’s order for his Marine Corps to prepare for war means the United States must accelerate its shift away from dependence on the Chinese market for these rare metals last November. In January, Xi told the Peoples Liberation Army (PLA) to be ready for war “at any second.”

“We should persist in using combat to guide our work; step up preparations for war ... as well as developing a top-level strategic deterrent and joint forces combat system,” Xi said earlier this month.

Chinese government-run companies hooked the Western defense contractors because they had been selling the rare Earth elements at a low price. It aims to hamstring the United States to the point it cannot resist CCP aggression.

Former President Donald Trump saw the danger and signed an executive order last September that called on the federal government to examine alternatives including ramping up domestic production.

“Our country needs critical minerals to make airplanes, computers, cell phones, electricity generation and transmission systems, and advanced electronics. Though these minerals are indispensable to our country, we, at present lack, the capacity to produce them in processed form in the quantities we need,” the executive order said. “American producers depend on foreign countries to supply and process them. For 31 of the 35 critical minerals, the United States imports more than half of its annual consumption.”

The former president’s order called for expanding domestic sources of these resources.

Australia has the sixth largest concentration of these elements, and Pentagon plans show a shift toward sources outside China. Last August the Pentagon signed a contract with Lynas Corporation—the only significant rare earth processor outside of China—in Western Australia to design work and research on a rare earth separation facility in Texas. It could take years for the plan to become commercially viable. It announced in February that it will pay $30.4 million to Lynas USA to accomplish this.

There’s no way to know, however, if this Texas plant will produce an adequate supply of rare earth minerals to satisfy the military’s needs because no estimates are publicly available.

The United States must also work with allies such as Canada and Australia to gain control of mines in producing nations like Myanmar and Malaysia to keep the Chinese from gobbling them up.

President Joe Biden issued an executive order in February that called for a 100-day review of defense industrial supply chains that presumably will include examining rare earths.

“The report shall identify areas where civilian supply chains are dependent upon competitor nations, as determined by the Secretary of Defense,” the Biden order said.

“The path to rare-earth independence for the US must include: Ensuring supply chains of rare earths necessary for national security; promoting the exploitation of the elements domestically (and removing barriers to responsibly doing so); mandating that defense contractors and other critical-infrastructure entities wean themselves off Chinese rare earths; sponsoring research and development to find alternative materials, especially for clean energy technology; and creating a substantial stockpile of the elements in case of a Chinese boycott,” Staviridis wrote.

China’s growing hostility and belligerence make building a national stockpile of these elements to support the defense industry a top goal. The sooner that the United States and its allies free themselves from dependence on China, the sooner they will free themselves from the CCP’s ability to hold defense production hostage. Hopefully, the administration will make this a top defense priority and aim to be China-free by the middle of the decade.

John Rossomando is a Senior Analyst for Defense Policy and served as Senior Analyst for Counterterrorism at The Investigative Project on Terrorism for eight years. His work has been featured in numerous publications such as The American Thinker, Daily Wire, Red Alert Politics, CNSNews.com, The Daily Caller, Human Events, Newsmax, The American Spectator, TownHall.com, and Crisis Magazine. He also served as senior managing editor of The Bulletin, a 100,000-circulation daily newspaper in Philadelphia and received the Pennsylvania Associated Press Managing Editors first-place award in 2008 for his reporting.