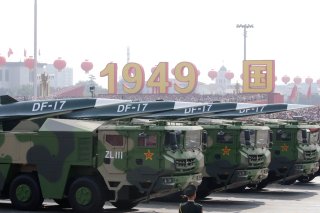 From a military point of view, the provinces of Zhejiang, Fujian, and Jiangxi would be central to a Chinese invasion of Taiwan, in large part because of their proximity to the island. Additionally, Zhejiang is notable for the strength of its economy and its role as a rising technology center. It has been identified by the central government as a key development area for China’s aerospace industry, with a heavy focus on R&D in aircraft and drone manufacturing. That will certainly factor into the increase of “intelligent” equipment—including unmanned systems, artificial intelligence, and hypersonic missiles—announced by Xi in a report submitted to the 20th National Congress.

In addition to these five technocrats, Xi has appointed long-time loyalist Huang Kunming to the position of party secretary of Guangdong province. The importance of that province to a potential invasion of Taiwan was made clear by a leaked recording of a Southern Theater Command meeting in May, which revealed that Guangdong would bear the responsibility of providing equipment, logistics, and troop supplies to the PLA in any conflict with Taiwan.

The final province critical to a potential invasion of Taiwan is Fujian province, which is located directly across from Taiwan. For that geographically critical region, Xi tapped public health expert and Xi loyalist Yin Li, who had previously been favored by Xi for his efficient and decisive anti-pandemic policies during his tenure as governor of Sichuan province. He was also recognized for his preemptive grid management, a skill that will be critical for a front-line province during wartime, as decisive mobility and efficient coordination will be essential.

These appointments will allow Xi to effectively use the knowledge and talent of his key insiders to develop military technology, establish civil-military cooperation mechanisms, and produce the weapons needed to succeed in an assault on Taiwan. This idea is reminiscent, to an alarming degree, of the opening statement of the book Dertotale Krieg (The Total War), written by Erich Friedrich Wilhelm Ludendorff, a German general and military theorist who contributed significantly to the Nazis' rise to power. In the opening remarks, Ludendorff argues that “the future world war will no longer be an action to pursue limited political goals by military means, but a comprehensive and absolute struggle for survival by giant nations. Therefore, before the outbreak of the next war, Germany must transform its political structure, economic industry, social appearance and popular psychology into a form suitable for achieving maximum military effectiveness.” Ludendorff argued that while victory depended on decisive battles, the mobilization and equipping of the army was a national undertaking that must be placed above all goals.

Xi has set about transforming the political structure of the CPP, particularly the Politburo, in order to strengthen China for a battle against Taiwan and, potentially, the world. He has also altered China’s “social appearance and popular psychology” through rising state controls over Chinese society and industry. Xi has been transforming the economy in a myriad of ways, most notably with the restoration of state-run “supply and marketing cooperatives,” which were prevalent during China’s command economy more than half a century ago and allow the supply and sale of goods to be controlled by the government.

Accompanying the cooperatives are further public-private partnerships, tightened taxation monitoring mechanisms targeting the rich, restrictions on citizens’ overseas travel, and even state-run community kitchens whose main goal, at least according to the Chinese government, is to provide convenience to the elderly in need of care. While that may be true to some degree, by enabling the state to collect and distribute resources and by driving people toward collective activities, these measures increase the government’s control over resource distribution, which will conveniently suit wartime management of societal resources and needs.

John Culver, a retired CIA researcher and senior fellow at the Atlantic Council, recently wrote that there is no sign of an imminent invasion of Taiwan by the PLA, at least before 2024. Culver argues that if war was Beijing’s plan, there would be reliable indications that it is coming, including surging production of various missiles, rockets, and key munitions, which would be noticed by international governmental and nongovernmental observers alike. He also says that China would take visible steps to insulate its economy, military, and key industries from disruptions and sanctions and would start preparing the population psychologically for the cost of the war. So far, as Culver notes, such indications have not appeared.

Although we may not have seen mobilization in ways that would suggest a known start date for a war, Xi is clearly determined to wage such a war in the not-too-distant future, as indicated by how the new Politburo and CMC were composed.

One of Mao Zedong’s famous military doctrines was to never fight battles that the military was unprepared for or unconfident in its ability to win. However, war is often about exceptions. Adolf Hitler would have liked to have started World War II in 1941 after Germany was fully prepared. However, Germany’s dire economic conditions and the alarm set off by the United Kingdom and France in response to the German aggression forced Hitler to begin the invasion eighteen months earlier than he had planned. Similarly, it is not impossible that Xi would launch an attack before China is fully prepared if he saw an opportunity that he believed would provide a strategic advantage, such as by catching the rest of the world off-guard, capitalizing on the chaos and distraction in other countries.

The CCP claims to hold three magic weapons necessary for victory: the populist route, armed struggle, and stealth wars. Among the three, stealth war is the most powerful, as it can initiate and spread chaos and then defeat those weakened and distracted enemies. America and Taiwan should be on high alert for such operations, especially during 2024, when both countries will hold important presidential elections.

Simone Gao is an award-winning investigative journalist and documentarian whose work has been focused on China. She is the host of the in-depth report program “Zooming In with Simone Gao.”