China’s Xinjiang After the Bombings: Going from Bad to Worse 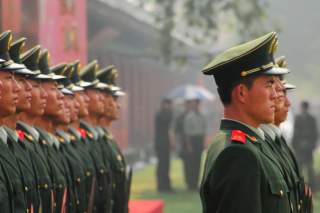 Tensions in China’s Xinjiang between the Uyghurs (who claim the region as their own) and the Han Chinese (the country’s majority population who also control its government) are nothing new. Both groups have been struggling for years over the sovereign status of this territory. However, in recent months, the tense, but relatively stable, standoff between the two sides has begun to fray as an expanding series of Uyghur terrorist attacks and Chinese reprisals have rocked the country. The May 22 Urumqi bombings placed a tragic exclamation mark on this trend and signify a frightening escalation of the conflict.

The attacks took place against the backdrop of a widening circle of Han-Uyghur violence. The opening salvo occurred on March 1 in Kunming when a small band of knife-wielding Uyghur terrorists rampaged through the southwestern Chinese city’s main train station leaving scores dead and injured in their wake.

The Kunming attack was unprecedented within China, especially because it took place so far from Xinjiang. It was the country’s own September 11. Not surprisingly, the incident incited a flood of anti-Uyghur invectiveness on Chinese social media sites and led to a sustained, high-profile, beefing up of security measures around the country. Beijing was determined to use all necessary means to prevent such a devastating event from ever taking place again on Chinese soil.

Tragically, but also rather predictably, such hardline policies did not halt the violence. A series of conflicts, big and small, followed that further fueled Han-Uyghur tensions. The most significant attacks in this wave occurred at the Urumqi South Railway Station April 30 and at a train station in the southern province of Guangzhou on May 6.

These recent Urumqi bombings, which left at least thirty-one dead and many more injured, are not simply a continuation of this trend: the scope of the carnage and the relatively sophisticated manner of its execution represent a chilling new chapter in the Han-Uyghur story.

While the details of the incident are still emerging, it appears to have been carried out by a network of attackers who chose their target with care, aimed to maximize the damage of their efforts and coordinated their movements. In other words, this was a far more complex and brazen terrorist operation than had previously been carried out on Chinese territory.

The attacks raise profound questions about Beijing’s ability to maintain the status quo in this restive northwestern region of China. Such a situation is inherently more volatile than even China’s most pointed external territorial conflicts, because of the unpredictability of when and how Beijing’s Uyghur opponents will strike, and the growing anger amongst Han Chinese toward the Muslim inhabitants of Xinjiang.

The demands within the country for retribution and revenge are growing with each attack and are sure to reach a new pitch in the coming days. How Beijing can satisfy such sentiments, and bring a modicum of stability back to Xinjiang poses thorny, perhaps irresolvable, challenges.

If China’s leaders do not do enough to strike back at the Uyghurs they will look weak and ineffectual to the majority Han Chinese population whose support they need to continue to govern the rest of the country. So far, it is Uyghur blood that is being called for by Chinese nationalists; but should it not be delivered, it is easy to imagine how such fury could turn back against the state leaders, who could be labeled as too soft and unable to provide for the protection of their citizens. Within such a dynamic, the issue of who has the right to govern (and for how long) could quickly extent beyond the question of Xinjiang.

Yet, if Beijing uses too much coercion against the Uyghurs, it is only likely to further harden anti-Chinese attitudes in Xinjiang. This would then inadvertently provide more fuel for the flames of ethnic violence there. Excessive force thus holds almost as much risk for China’s leaders as does the appearance of being too yielding.

Unlike within its outstanding disputes with Vietnam and Japan, then, there is no simple way to de-escalate the situation in Xinjiang. China’s superior power over the region will ensure that it does not go anywhere, but ruling it is growing increasingly difficult, and the costs of control are mounting. Beijing will not let the region go. Its inhabitants, though, are steadfast in their unwillingness to accept such a reality. This is likely to lead to more, not less, violence over the coming weeks, months and years.

This being the case, it is possible that China’s leaders may, once the shock of the bombings wears off, finally realize just how fractured the situation in Xinjiang has become. This could then lead them to a broader reconsideration of what underlies the current conflict, and push them in the direction of entertaining innovative policy options that might be utilized to rectify it. Yet, such a prospect seems exceedingly remote given the current political climate in China. Thus, while it would be premature to then argue that Xinjiang is sliding into an ethnic-based civil war, it does seem as if the words W.B. Yeats wrote so many years ago in “The Second Coming” may now have haunting resonance in China’s restive northwest: “Things fall apart….”