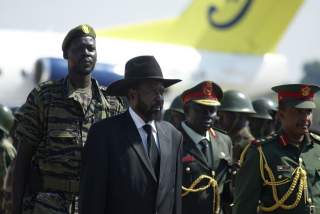 When South Sudan achieved its independence from Sudanese President Omar al-Bashir’s brutal rule in 2011, hopes were high as U.S.-led foreign investment and aid flooded into the world’s newest country. Yet, since a civil war broke out in December 2013, over 50,000 people are estimated to have died, over 1.4 million have been displaced, and 40 percent of the country’s population will face acute hunger in the next few months. Where did it all go wrong?

In July 2013, South Sudanese President Salva Kiir of the powerful Dinka ethnic group fired Vice President Riek Machar of the smaller Nuer tribe, claiming he was plotting a coup to oust Kiir from power. The army quickly split along Dinka-Nuer lines, as Machar fled the capital Juba along with Nuer soldiers to launch a rebellion from the oil-rich areas in the Upper Nile, Unity and Jonglei States where the Nuer are based.

These Dinka-Nuer divisions have a long history which pre-date South Sudan’s independence. In 1991, Machar defected from the Sudan People’s Liberation Movement (SPLM) armed struggle against Sudan and subsequently led a Nuer militia to kill hundreds of Dinka in the infamous Bor massacre. While Machar returned to the SPLM fold in 2002 after apologizing for his role in the Bor massacre, historical grievances, distrust and tribal divisions remained.

Ethnic Nuer rebels have been advancing on strategically important oil fields in Upper Nile and Unity States since May 15, following the defection from government ranks in the Upper Nile State of the ethnic Shiluk General Johnson Olony. Indeed, as this conflict becomes more protracted in nature and ethnic groups arm themselves to defend their territory from the violence, the risk of a “Balkanization” of South Sudan into ethnic enclaves continues to increase.

While ethnic and personal divides may have triggered the civil war, divergent regional interests by Ugandan President Yoweri Museveni and Sudanese President Omar al-Bashir help fuel the fighting. Prior to South Sudan’s independence, Museveni provided extensive support to Kiir and the SPLM in its armed struggle for autonomy from Sudan between 1983-2005. Sudan’s al-Bashir responded by supporting the Lord’s Resistance Army (LRA) rebels in Uganda, as the two countries vied for regional influence. Uganda has now become a major trading partner with South Sudan, with thousands of Ugandans working and operating businesses there. Museveni therefore has a number of historical, political and economic reasons to keep President Kiir in power, as evidenced by the continued presence of Ugandan troops and crucial air support for Kiir’s embattled forces.

Sudan, on the other hand, has been accused of providing arms to the Nuer rebels and allowing them to use its territory to launch cross border attacks. In May 2014, Small Arms Survey investigators found ammunition cartridges of recent Sudanese origin that had been used by the rebels in Bentiu, the capital of the Unity State. Considering al-Bashir’s personal animosity with President Kiir, as well as Khartoum’s interest in preempting a strong, unified oil-rich South Sudan allied to its regional rival Uganda, Sudan stands to benefit from its support of rebel forces. This is particularly true should the rebels take control of oil fields in Upper Nile and Unity States, from where oil is exported via pipelines in Sudan.

Enter China. With extensive oil and infrastructure investments in South Sudan, a history of arms shipments to President Kiir’s forces, as well as increasing political and economic influence on Sudan, Uganda and other regional actors, it has built up the kind of geopolitical influence that will be difficult for the United States to match. South Sudan accounts for 5 percent of China’s crude imports and the state-owned China National Petroleum Corporation holds a 40 percent stake in three of South Sudan’s largest oil fields. Moreover, China has been quietly ramping up its humanitarian aid, pledging over $21 million of emergency relief in October 2014.

South Sudan has also pushed the limits of China’s public stance of non-intervention in the internal affairs of other states. For the first time in its history, China has sent a large scale contingent of combat troops to join a UN mission to South Sudan as well as taking an uncharacteristically high-profile mediator role in the conflict. While China has a vested interest in long-term stability to restore oil exports, it recognizes its limits in resolving this entrenched, ethnically-based civil war, particularly given that South Sudanese oil constitutes a small fraction of China’s imports.

Furthermore, China is playing the long game in South Sudan and Africa as a whole. While the West ignored the economic potential of the continent for decades, China has filled the void, exchanging its capital investment and know-how for long-term control over African oil, land and natural resources. It has a ways to go in becoming Africa’s uncontested power broker and  South Sudan’s protracted conflict reflects the limits of its stabilizing influence. Nevertheless, given that the 21st century is predicted to be "Africa’s century" of economic growth, China has strategically positioned itself to reap the rewards.

Alex Fielding is a senior intelligence analyst specializing in African affairs with Max Security Solutions, a geopolitical risk consulting firm based in the Middle East. He previously worked for the International Committee of the Red Cross in the Democratic Republic of the Congo and the Appeals Chamber of the International Criminal Court in The Hague. All views expressed are the author’s alone.