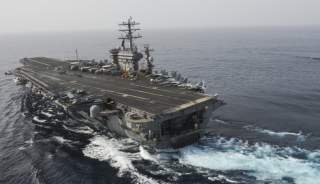 During U.S Secretary of Defense Chuck Hagel’s recent trip to China, China’s Minister of Defense, General Chang Wanquan, warned that Beijing would make “no compromise, no concession, [and] no trading” in the fight for what he called his country’s “territorial sovereignty.” Chang told Hagel: “The Chinese military can assemble as soon as summoned, fight any battle, and win.” The comments come amid an escalating campaign by Chinese nationalists to alter the status quo in the Western Pacific that has raised alarm in capitals across the region.

While China’s more aggressive external posture in the East and South China Seas has been on display since 2009, Beijing’s dispute with Japan over the Senkaku/Diaoyu islands and with Vietnam over disputed waters and islands in the South China Sea have grown increasingly volatile over the past year.

“To be able to conduct a short, sharp war to destroy Japanese forces in the East China Sea, followed by what can only be expected [to be] the seizure of the Senkakus, or even the southern Ryukus...Tensions in the South China and East China Seas have deteriorated, with the Chinese coast guard playing the role of antagonist, harassing neighbors, while PLAN ships, their protectors, conduct port calls throughout the region, promising friendship and cooperation.”

And this month, China and Vietnam found themselves embroiled in a dangerous game of brinksmanship after China deployed a massive oil rig to waters claimed by both countries near the Paracel islands. Shadowed by dozens of Chinese naval vessels, including a half-dozen PLAN warships, the Chinese flotilla immediately clashed with civilian vessels from Vietnam, where an outburst of anti-China protests has forced the evacuation of thousands of Chinese citizens.

In an attempt to quiet the turbulent waters of the Western Pacific, last month leaders from more than twenty Pacific navies signed the promisingly worded Code for Unplanned Encounters at Sea at the Western Pacific Naval Symposium in Qingdao, China. Unfortunately, the agreement continues the recent trend in regional pacts: marginally productive but lacking in any real teeth.

The resolution is non-binding; only regulates communication in “unplanned encounters,” not behavior; fails to address incidents in territorial waters; and does not apply to fishing and maritime constabulary vessels, which are responsible for the majority of Chinese harassment operations.  Perhaps most important, the code fails to address the principal disquietude in U.S.-China relations: fundamentally contradictory interpretations of a country’s legal rights within its Exclusive Economic Zone (EEZ).

For as the temperature has risen on China’s maritime territorial disputes, the U.S. and China have been struggling to manage their own, altogether separate, conflict of interest at sea. Though it has not garnered the attention of the East or South China Sea disputes, this legal wrangle has the potential to be every bit as dangerous, and has already led to nearly a dozen confrontations at sea between U.S. and Chinese naval vessels.

Historically the oceans of the world were divided into two categories: “territorial seas,” a state’s sovereign waters stretching three nautical miles from its coastline, and the “high seas,” open to unrestricted navigation for all. During decades-long negotiations for the UN Convention on the Law of the Sea (UNCLOS), which took effect in 1994, conferees agreed to extend a nation’s territorial waters from three to twelve nautical miles and create several new maritime boundary designations including an Exclusive Economic Zone (EEZ) extending 200 nautical miles from a country’s coastline. There, the coastal state would enjoy exclusive rights over economic exploitation activities and marine scientific research, among other related things. Though not a party to UNCLOS, the U.S. observes the maritime boundary distinctions in practice.

Over time different interpretations of a nation’s rights in its EEZ have developed. The U.S. and most other countries of the world treat the EEZ like the high seas when it comes to foreign militaries conducting surveillance: permission is not required from the coastal state. China, by contrast, argues that the EEZ is more akin to a country’s territorial sea, where coastal state permission must be obtained for a foreign military to conduct surveillance activities there.

China is not alone: Sixteen other countries share China’s position, seven more claim territorial seas beyond the 12 nautical miles stipulated by UNCLOS, and three assert full sovereignty in their 24 nautical mile contiguous zone.  Among these are several South and Southeast Asian countries, including: Bangladesh, Myanmar, Cambodia, India, Malaysia, Maldives, Thailand, and Vietnam. Yet, while some capitals have issued diplomatic protests when U.S. naval vessels have operated in their EEZ without consent, only China has operationally challenged U.S. warships on multiple occasions, the most recent involving the USS Cowpens in December 2013.

China justifies the harassment of U.S. vessels by claiming that U.S. surveillance operations such as sonar mapping have dual-use military and scientific purposes and therefore qualify as marine scientific research, which only the coastal state is allowed to conduct in its EEZ. However, U.S. Captain Raul Pedrozo (USN, Ret.), associate professor at the U.S. Naval War College’s international law department,  contends that under UNCLOS “coastal State consent is not required for survey activities, including hydrographic and military oceanographic surveys, in the EEZ.” Pedrozo argues:

Although the means of data collection may be the same or similar to that used in [Marine Scientific Research], the information obtained during military marine data collection or a hydrographic survey is intended for use by the military or to promote safety of navigation.

Foreign ships transiting the territorial sea in innocent passage may not engage in “any act aimed at collecting information to the prejudice of the defense or security of the coastal state.” A similar restriction does not appear in Part V of the Convention regarding the EEZ. Under generally accepted principles of international law, any act that is not specifically prohibited in a treaty is permitted. [emphasis added]

Finally, China accuses the U.S. of applying a double standard, arguing Washington would not accept Chinese military vessels conducting similar activities in its own EEZ.  This claim is untrue, and rings particularly hollow given that China regularly conducts military surveillance operations in and around Japan’s EEZ. During the Cold War the U.S. allowed Soviet ships to operate within 200 nautical miles of its coast unmolested so long as they followed customary law regarding maritime conduct and collisions at sea.  When it was revealed in 2013 that China had begun conducting military surveillance activities in America’s EEZ around Guam and Hawaii without incident, Admiral Samuel Locklear, the head of U.S. Pacific Command, responded “we encourage their ability to do that.”

Thus far the U.S. has ignored Chinese warnings about EEZ surveillance operations and Chinese civilian and military vessels have periodically responded with provocative and reckless behavior. At times U.S. vessels have ignored the harassment; other times they have left the EEZ and returned with an armed escort.  The incidents generally involve a U.S. surveillance ship being “buzzed” by a Chinese coastal patrol aircraft like the Y-12 or a Chinese naval patrol ship or fishing vessel passing provocatively close to the U.S. vessel, repeating the message that the American ship’s mission is illegal and that it should leave China’s EEZ. At times PLAN frigates or amphibious dock ships have confronted or shadowed U.S. surveillance vessels for days.

Most of the confrontations have occurred in the East and South China Seas and involve U.S. Navy Special Mission Program ships, which conduct oceanographic surveys, underwater surveillance, hydrographic surveys, missile tracking and acoustic surveys. The U.S. Navy also conducts “Freedom of Navigation operations” in and around China’s claimed EEZ, a program designed to challenge maritime claims that the U.S. finds inconsistent with international law. These operations “involve naval units transiting disputed areas to avoid setting the precedent that the international community has accepted these unlawful claims.”

A Pattern of Behavior

Testing boundaries and establishing new status quos has been a defining feature of China’s more provocative external posture since 2009. When the U.S. and other countries have faltered in the face of this agenda, as was the case with the Philippines in the Scarborough Shoal, China has successfully advanced its goals. However, where the U.S. has demonstrated resolve, Beijing has opted to avoid confrontation.

In 2010, after the sinking of the South Korean corvette Cheonon by a North Korean midget submarine, Beijing warned the U.S. multiple times against sending the USS George Washington aircraft to conduct exercises with South Korea in the Yellow Sea. After some delay, those exercises were eventually held over Beijing’s objection, and the U.S. aircraft carrier has now exercised in the Yellow Sea multiple times with little protest from Beijing. When Beijing unilaterally declared an Air Defense Identification Zone in late 2013, the U.S. decision to immediately fly B-52 bombers within the new ADIZ without notifying Beijing established an important precedent. And the U.S. has, and must continue to, conduct surveillance activities in China’s EEZ despite Beijing’s frequent objections.