China and America: At a Dangerous Tipping Point 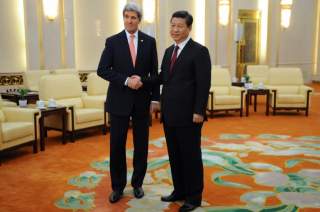 Just a year ago, presidents Barack Obama and Xi Jinping met in California and, in shirtsleeves, proclaimed a “new type of major-power relationship.” A noble aspiration, perhaps. But in the interim, such stage-managed optimism has been dangerously overtaken by a cascade of troubling events.

One day, the United States indicts five PLA officers for cybercrimes; the next, the United States claims victory in WTO disputes over car tariffs and rare earth minerals. All this is happening while the United States promises enduring support for Asian allies, and it has moved openly to challenge the legitimacy of Chinese territorial claims in the South China Sea. Meanwhile, China is busy creating facts on the ground and water. Last month, a $1 billion Chinese oil rig set up operations in territorial waters claimed by Vietnam. In the East China Sea, Chinese SU-27 fighter jets have come within 100 feet of Japanese surveillance aircraft.

The mood has soured, more than the usual ups and downs of big-power relationships. The question now is not whether a “new type of relationship” is in the offing, but rather, whether U.S.-Chinese relations have reached a tipping point.

From WTO cases to Beijing’s behavior along the western Pacific, the thread that links them all is the question of global rules and norms. As China integrated into a global system, rapidly becoming a major beneficiary, an expectation arose that it would also invest itself in a rules-based order. The implied bargain: With steadily more weight would come more opportunity to shape the rules—just as the United States had done in its twentieth-century rise and postwar influence.

For an entire generation, the United States and its allies and partners in Asia have embraced a hedging strategy toward China: on the one hand, full economic cooperation with booming trade and investment; on the other hand, moves to counterbalance China’s growing military capacity (which was the result of two decades of double-digit growth in military spending). Much faster than predicted, China has gained sophisticated, new military capabilities: Our defense department reckons China’s defense budget at $145 billion, second only to the United States.

Until now, the hedging strategy—a partly cooperative/partly competitive template—has made sense. It reflected and respected both China’s complexity and its three-decade integration into the international economic system. China has become a major economic partner of the United States, with $562-billion in bilateral trade in 2013.

The rules-based order enabling these changes belongs to China just as much as to the West. For many years, the liberal ‘institutionalist’ school has argued that helping China integrate into the global system would shape and constrain its behavior. This aspiration congealed into hope that Beijing would emerge a “responsible stakeholder”, now contradicted by China’s neomercantilist security agenda.

Instead, like a classic rising power, Beijing has become more assertive as the power gap has narrowed between the United States and China. President Obama had barely returned from his recent trip to Asia when Beijing unambiguously began to probe U.S. resolve by placing that oil-drilling rig and a flotilla exceeding one hundred vessels, including coast guard and PLA Navy ships, in Vietnamese territorial waters.

Along the western Pacific, and in Asian land borders elsewhere, the basic assessment of China’s long term intent is changing. In particular, the notion of a cooperative U.S.-Chinese economic relationship, balanced nicely by security hedging, has run aground—no matter how much the U.S. business community might wish otherwise.

Something’s got to give. It is difficult to see how two contradictory paths—economic integration and security confrontation—can be sustained. The time is fast approaching when the United States will have to decide how and where to draw the line. We are well on the way: Washington now openly challenges the legitimacy of Beijing’s South China Sea claims as well as China’s expansive and unilateral definitions of air and maritime control aimed at curtailing U.S. and allied access.

If the ‘new type of great-power relationship’ means acquiescence in Chinese amour propre—i.e., giving tacit parity to an aggressive, anti–status quo power—then we’ve truly reached the tipping point. In our meetings with Chinese scholars, we hear incessantly that America refuses to recognize China’s “core interests.” Yet we have a few of our own, especially a policy aimed at preserving maritime and commercial to and within Asia, an enduring interest since the eighteenth century and fixed in concrete since 1945. This now extends to the new global commons: cyber and space, repeatedly challenged by Beijing.

Not for nothing have successive U.S. administrations described America as “a resident power in Asia.” It’s one thing if China simply seeks a larger strategic footprint and a larger say in writing the rules. It’s quite another if Beijing seeks to apply its own rules by fiat. And here we reach the crux of it: Only U.S. strategic clarity can blunt Beijing’s irredentist push in the western Pacific.

U.S. statecraft must regain the initiative. It must settle on a proactive agenda, one designed to clarify Beijing’s choices. On the positive side, we must fashion various risk-reduction and confidence-building measures, including a joint study of U.S. missile defense aimed at assuaging Chinese fears that its nuclear second-strike capability could be at risk. Let’s aim for an Asian version of the ‘Open Skies Treaty’ for monitoring activity in the East and South China Seas.

Yet while mutually beneficial, don’t hold your breath in waiting for a favorable reaction. In Chinese strategic culture, transparency appears as a weapon of the strong against the weak. Conversely, uncertainty and unpredictability are seen to confer strategic advantage. Nonetheless, steps like these would serve both countries in a relationship of increasing mutual vulnerability.

Beyond that, we fear the troubling shortage of Chinese defense and security analysts truly knowledgeable about America’s ability to focus sharply and ruthlessly when it sees itself in contests of extremity. Our maritime Cold-War practice remains deeply ingrained in the US Navy. And China’s casual attitude towards Japanese capabilities ignores that country’s maritime traditions and skills.

The Chinese haven’t fought a war since 1979; the ‘lesson’ that it ‘taught’ Vietnam cost more Chinese lives in three weeks than the total of those lost by the United States in its long Indochina wars. If China continues to move towards open challenge of our bedrock interests, it cannot complain if we come to play the resulting contest in ‘full spectrum’ mode. In a highly charged environment, it wouldn’t be long before strident voices in Washington began to urge exploitation (if only in symbolic ways) of China’s vulnerabilities such as restive minorities in Xinjiang and Tibet. That would be a terrible outcome.

In his recent West Point speech, the president gave scant attention to the major U.S. foreign-policy issue—this one. Singling out terrorism may still resonate, but the outcome in Asia will determine how the remainder of this century plays out.

James Clad was US deputy assistant secretary of defense for Asia from 2007-09, and is Senior Adviser for Asia at the CNA in Arlington, Virginia.

Robert A. Manning is a senior fellow of the Brent Scowcroft Center for International Security at the Atlantic Council. He served as a member of the US Department of State Policy Planning Staff from 2004 to 2008, and on the National Intelligence Council from 2008-12. Follow Robert on Twitter: @Rmanning4.