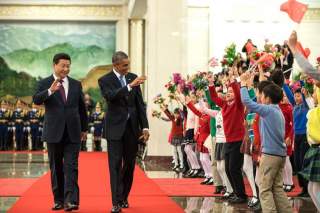 Despite thorny issues that often dominate the headlines, China and the United States are working closely on almost every major global issue. This cooperation is not only out of good will, but also on the fundamental interests of both countries and their shared responsibilities to the world.

The landmark expansion of the Information Technology Agreement (ITA) in July was the first major tariff-eliminating deal at the WTO in almost two decades. Because of this deal, about $1.3 trillion worth of IT trade will be conducted with zero tariff rate per year, benefiting numerous businesses, workers and consumers worldwide. This deal would not have been possible without a critical agreement between China and the United States last November and close coordination and cooperation between the two sides.

As each other’s second-largest trading partner and the two most important trading countries in the world, what really matters to China and the United States is not who has the privilege to write trade rules, but how to write rules together with other countries in a bid to jointly promote open, transparent and rule-based economic cooperation that benefits all. Certainly a lot more can be done down the road.

Tackling climate change is a priority for both China and the United States. Both have made bold commitments of cutting carbon emissions and are determined to promote comprehensive and balanced outcomes in the 2015 Climate Change Conference in Paris. Both believe that reducing carbon emissions will not impede economic growth but generate more jobs and opportunities, and bring more practical cooperation between them.

The U.S. demand for solar panels and wind turbines is rising rapidly, and Chinese companies can provide high-quality and economical products to meet that demand. China is also looking to build more nuclear power plants, apply more clean-coal technology and increase the exploration and consumption of natural gas. American products and expertise are surely welcomed. In order for this to happen, however, the United States should lift outdated restrictions on the export of high-tech energy products and avoid implementing unbalanced trade remedy actions against Chinese products.

The recent breakthrough in the Iranian nuclear negotiations would not have been possible without effective China-U.S. cooperation and the steadfast commitment of both sides to safeguarding the international nonproliferation regime. Over the years, China has observed every UN Security Council resolution with regard to Iran and played a unique and constructive role in fostering diplomatic solutions. This proves that as long as there is a common goal, the different approaches employed by China and the United States can complement each other and produce win-win results.

In Africa, there is no competition over who is a better partner of African countries. If China and the United States can work effectively together and contribute to the peace and prosperity of this continent, both will be better partners of African countries. In the fight against Ebola last year, China launched the largest emergent humanitarian-assistance action in its history, and worked closely with the United States and other international partners. This set a great model of cooperation between our two countries, which can be applied to many other important areas.

Even on those controversial issues, cooperation—instead of confrontation—is key to finding solutions. The United States admits that it has no territorial claim in the South China Sea and basically shares the same goal as China—keeping sea-lanes safe and open for business. We hope the United States will play a constructive role in creating a supportive atmosphere for the peaceful settlement of the disputes through negotiations by the countries directly involved.

China is a major victim of cyberattacks. A large portion of such activities originate from foreign countries. Cyberattacks are usually conducted anonymously and across borders, making them hard to trace back to the source. Unfounded accusations or megaphone diplomacy will be nothing but counterproductive. If we work together rather than separately on these issues, there is certainly a lot more to achieve.

Furthermore, the Chinese Embassy is holding a photo exhibition of China-U.S. cooperation during World War II. It relives the profound friendship that China and the United States fostered in fighting fascists side-by-side more than seventy years ago. Seven decades is just a short span of time in human history. Vicissitudes in history do not stand in the way of closer cooperation between our two countries on major issues concerning the future and destiny of mankind. Such cooperation has become even more essential and necessary in the twenty-first century.

In this context, good habits of cooperation need to be fostered: never lose focus, stick to shared goals and interests, accommodate each other's legitimate concerns, benefit from each other's wisdom, overcome obstacles that hold us back—and most importantly—prevent our differences from dominating the agenda of the bilateral relationship. President Xi Jinping will pay his first state visit to the United States in September. We hope that his meetings with President Obama will give further guidance to the building of a new model of major country relations between our two great nations, and bring greater benefits to our two peoples.

Cui Tiankai serves as China’s ambassador to the United States.