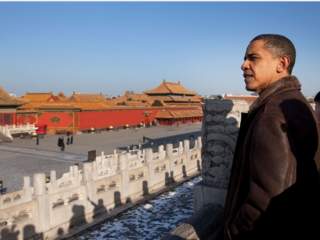 In his National Interest article of Aug. 26, China’s ambassador to America, Cui Tiankai, correctly points out that the U.S.-China relationship encompasses extensive cooperation across a broad spectrum of activities, including trade, education, combating climate change, and managing global peace and stability. Indeed, the bilateral relationship is mostly about cooperation. Yet, tragically, the relatively narrow sector of U.S.-China strategic disagreements threatens to overwhelm the relationship as a whole. Ironically, Cui’s plea for managing these disagreements unintentionally demonstrates how intractable they are.

In a prescription for “finding solutions” on “controversial issues” that divide Beijing and Washington, Cui makes three points.

First, America should “create a supportive atmosphere for the peaceful settlement of the disputes through negotiations by the countries directly involved” in the South China Sea dispute.  In other words, non-claimant Washington should stop intervening on behalf of smaller claimants such as the Philippines and Vietnam that cannot compete with China’s capacity to deploy ships and aircraft or to build artificial islands.

Many Chinese analysts say Xi Jinping isn’t really insisting that America sever its alliances and withdraw from its bases in the western Pacific immediately. But Cui and other senior officials do seem to demand that Washington stop exercising influence in defense of friends and allies in the region, even when these friends and allies are in danger of being steamrolled or bullied by China.

Cui’s second point is that Washington should cease “unfounded accusations or megaphone diplomacy.” Cui made this point in the context of Chinese cyber warfare against the U.S. and other countries, but it applies to other issues such as alleged human rights violations.

On the issue of cyber warfare, Cui may be partly right. Both Washington and Beijing have been caught cyber-spying and falsely denying that they do it. I would argue that China’s cyber activities are more egregious than America’s. Military-related information is fair game for both sides. While Washington has conducted some economic-related spying, China clearly operates a much larger program of stealing business secrets for the benefit of its domestic industries. In any case, perhaps Americans should do a better job of protecting themselves against cyberwarfare, cut back on the whining about Chinese attacks, and instead quietly respond in kind. Only a demonstrated capacity to retaliate has a chance of deterring future Chinese cyber attacks.

When it comes to the Chinese wish that Americans would stop making “unfounded accusations” about human rights issues, we all know this is a permanent point of friction. Just as it is in the DNA of the Chinese Communist Party to suppress and punish unauthorized criticism, it is in the DNA of Americans and other Westerners to demand the right of free political speech. Pointing out that America has its own human rights problems does not persuade Americans to stop complaining about human rights abuses in other countries; rather, Americans will go on complaining about abuses both at home and in China.

Finally, Cui asserts that China and the United States should “never lose focus, stick to shared goals and interests, [and] accommodate each other's legitimate concerns.”

Sticking to or focusing on shared goals and interests sounds like something you would say to your neighbor immediately after stealing his cow: let’s not bicker about the stolen cow, let’s concentrate on doing business together—for example, how much will you pay me to sell you this cow I’ve just acquired?

In the South China Sea, China has just completed a breathtakingly rapid and massive project of building artificial islands in the middle of an international waterway that appear destined to become small air and naval bases for the Chinese armed forces. Furthermore, the behavior of Chinese forces in the area suggests the Chinese intend to claim that the areas around their artificial islands are Chinese territorial waters and airspace. Such a position would violate the international Law of the Sea treaty (of which China is a signatory) and would cut into the freedom of navigation of non-Chinese ships and aircraft, including US Naval forces that use the South China Sea to transit between the Indian and Pacific Oceans. Yet Cui unrealistically calls on America to let this go without a response.

“Accommodating legitimate concerns” is a code phrase for recognizing China’s unreasonably expansive territorial claims, including the Chinese demand that America abandon Taiwan to the threat of a PRC military takeover.  The United States, of course, has several competing concerns, legitimate in American eyes, that the Chinese have consistently refused to accommodate.

Cui’s statement can be read as a preview to the position Xi Jinping will bring into his summit with President Obama next month. It comes down to a familiar Chinese formula: you Americans need to stop doing things we don’t like, and then we can be great friends.  Don’t expect much from the summit beyond a few days of seemingly improved atmospherics.