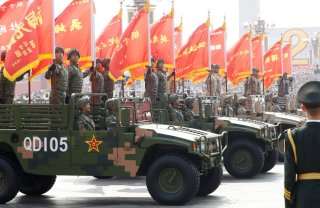 Intellectual property theft by China has caused cumulative, total losses to the U.S. economy that far exceed two trillion dollars in the last ten years alone. This sum, if divided, could have made one in every forty American families, instant millionaires.

Intellectual property theft is a hydra that damages many aspects of our economy. It thwarts incentives for business development, for the specter of theft increases risk. It has been estimated that three-quarters of China’s business-software market is filled with pirated code. The result: Key software expenditures are a small fraction of comparable spending by American companies, conveying enormous, unearned competitive advantages to Chinese firms.

One answer lies in greatly enhanced cybersecurity. Cyberwarfare separates us from reality, for it may create a false simulacrum or delete, repurpose, or misuse vital information. Volitional or intended actions may be rendered impossible. America has been buffeted by nonattributable cyberattacks, which in certain contexts are instruments of war.

We must be ready to pierce this threat to force accountability in our present age of hybrid warfare that blends attacks of different natures upon vital economic and financial assets, including our energy grid. Deterrence requires that America possess both defensive and offensive cyber capabilities.

It is a corrupt attempt to entrap developing countries with loans, which may use national assets as collateral. Countries such as Sri Lanka are paying a terrible price, for these loans are designed to ensure noncompliance.

Beijing also intends to dominate the supplies of strategically critical materials needed for the production of renewable energy and other emergent technologies. According to the United States Geological Survey, we are dependent on imports of such materials as cobalt, manganese, and indium. All are vital in the production of products that will define this century.

Also critical is the production of rare-earth metals, including erbium, neodymium, samarium, and many others. China dominates in the supply of these metals, and the secure mining of other critical elements, such as lithium, is hampered by environmental restrictions, which are alien to China. Thus, all are subject to Beijing’s design to wage a resource war against American interests.

Beneath the South China Sea lies great stores of energy and minerals: Therefore, China’s creation of militarized islands in the South China Sea must be contested. President Xi Jinping must not be allowed to steal these resources, which properly belong to the nations that brace this sea.

Energy use is directly correlated with income and wealth. Fossil fuels are essential to human development and to the production of goods such as chemicals, asphalt, and plastics.

China’s intent to claim the South China Sea will permit Beijing’s exploitation of the immense energy and mineral wealth of this area. We must work with affected nations to lacerate China’s hegemonic objectives. The resource war, which Xi seeks, cannot be won if we do not recognize Beijing’s goals.

Beijing’s ambition is to destroy what it views as its geostrategic obstructions. As Ukraine is to Moscow, Taiwan is to Beijing, whose trajectory of conquest centers on the subjugation of that state. The conquest of Taiwan would remove the key strategic chokepoint to a Chinese military breakout, which would threaten the entirety of the Indo-Pacific, including Guam, Hawaii, Japan, and Australia.

A successful invasion would shatter American prestige and influence in the Indo-Pacific, threatening America’s status as a superpower, which would invite armed conflict. Possession of Taiwan would also eliminate a primary technological and economic partner of the United States.

Taiwan is a principal supplier of semiconductors to the U.S. economy. If these supplies are interrupted by war or by conquest, America’s economy will falter, which will make us more dependent on China.

China’s Belt and Road Initiative, which seeks to control resources and supply chains globally, is thus part of a larger strategy that centers on the invasion of Taiwan. The 1979 Taiwan Relations Act requires that we maintain Taiwan’s defensive abilities to thwart an attack from the mainland. Presidents from both parties have acted forcefully in demonstrating American resolve in this regard. America must defend Taiwan, for to do so is to defend America.

In my recent trip to Taipei, in the presence of Taiwan’s president, I declared that America should immediately recognize Taiwan as a "free and sovereign country." This action will support global stability if it coincides with the provision of arms that can overmatch any invading force. Failure, however, to match deeds to words will undercut deterrence and may precipitate armed conflict.

The West must not replicate its errors in failing to decisively arm Ukraine before Russia’s invasion. If through indifference or ineptitude our government allows the People’s Republic of China to invade Taiwan, such malfeasance could constitute as great a strategic miscalculation as the appeasement that precipitated World War II. Further, should China enable Russia to continue its assault against independent countries that were once forcibly bound to the Soviet Union, America and our allies will be flanked by pincers that will be difficult to contest.

If violence and theft become a nation’s currency, free trade becomes impossible. In history, the usual progression from such a point has been degeneration followed by war, which we now see in the case of Russia’s assault against Ukraine.

China seeks to control vital elements of our capital markets, including a long-term strategy to wrest the dollar as the world’s reserve currency. Today, capital from American investors funds Chinese companies traded on U.S. exchanges.

In its 2021 Report to Congress, the U.S.-China Economic and Security Review Commission cited the massive exposure of American investors to Chinese equity and debt securities. U.S. holdings of Chinese equities may well exceed one trillion dollars; debt holdings amount to many billions more. Precise calculations and verifiable valuations have been made difficult to ascertain, for China uses complicated legal structures and tax havens to mask its activities involving U.S. exchanges.

Today, there are thousands of Chinese companies in the investment portfolios of scores of millions of Americans. The true level of American financial exposure to Chinese state-controlled companies is not fully known, due, in part, to failures in oversight by the Securities and Exchange Commission and the Treasury Department.

American investors are not only at risk, they are almost universally uninformed that their pensions and their stock portfolios are riddled with holdings in Chinese companies that may be sanctioned or may directly serve China’s war machine. This infusion of wealth into China has allowed its regime to eviscerate human rights with impunity, for it believes itself invulnerable due to its intertwining with Wall Street, American industries, academic institutions, and Hollywood. In response, financial, energy, technology, currency, cyber, and data security must become our watchwords, if our investors and institutions are to be free of Beijing’s yoke.

Opaque and vested financial interests cannot be allowed to govern the long-term security and economic interests of the American people. China’s business lobby and Wall Street cannot be permitted to continue to influence our corporations or to dictate the fortunes of American retail investors.

Sadly, we have learned that money can kill, that human rights abuses can be intensified, that our national security can be compromised, and that investor protections are too often given short shrift. Nazi Germany and the USSR were empowered through their attraction of capital and resources from Western democracies. We cannot let history repeat itself through our somnambulant funding of a totalitarian police state, for Xi counts on greed and short-term thinking to facilitate his nation’s emergence as a juggernaut, intent on global hegemony.

Greed is corrosive and is the formula for the loss of our fundamental freedoms. Our strengths must not be allowed to be turned against us. American corporations and institutions have been forces for democratic development and market creation throughout the world. Today, Hollywood has been infiltrated by China. This creates subversive pressures that impact our nation’s media, publishing, and news sources, because the conglomerates that dominate Hollywood also control these industries.

Hundreds of Chinese companies are listed on our largest financial exchanges. These firms are capitalized in the trillions of dollars.

With the resolute support of the administration that I served, the U.S. Senate, on May 20, 2020, without objection, approved the bipartisan Holding Foreign Companies Accountable Act (HFCAA); the House of Representatives concurred. On December 18, 2020, President Donald Trump signed into law the HFCAA, which amended the Sarbanes-Oxley Act of 2002.

According to the summary of the legislation, written by the Congressional Research Service:

This bill requires certain issuers of securities to establish that they are not owned or controlled by a foreign government. Specifically, an issuer must make this certification if the Public Company Accounting Oversight Board [PCAOB] is unable to audit specified reports because the issuer has retained a foreign public accounting firm not subject to inspection by the board. Furthermore, if the board is unable to inspect the issuer's public accounting firm for three consecutive years, the issuer's securities are banned from trade on a national exchange or through other methods.