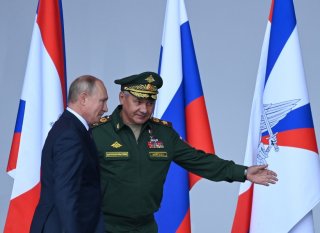 The United States is facing two serious and relatively immediate military threats—one from the East and one from the West. Russia is massing troops and armaments on the eastern border of Ukraine while China is moving ships and fighter jets into the defense zone around Taiwan. Both rogue nations are claiming they are only defending themselves, in Russia’s case, from hostility from Ukraine and the Baltics and, in China’s case, from Taiwan, Japan, and the United States.

However, the treatment of these twin threats leaves something to be desired. The central misunderstanding is while China and Russia see their military capabilities as serving aggressive objectives, this salient fact is unfortunately often obscured because of the way the situations are described here in the United States, Europe, and Asia.

For example, both Russia and China are routinely described as modernizing their conventional and nuclear “deterrent.” For most Americans, a deterrent acquired by the United States is to stop bad guys from doing bad things. Deterrence is not designed to be used by the United States to grab territory or intimidate free and peaceful nations.

For Russia and China, their military capabilities are just a part of their overall military, political and economic arsenal, to serve primarily aggressive objectives where Moscow and Beijing seek more territory or hegemonic military and political authority. Taiwan and Ukraine, for example, pose no security threat to anyone, let alone China and Russia. Neither have armed forces capable of external aggression, and compared to their immediate adversaries, their militaries simply are no match, however capable they may be.

Taiwan seeks friends such as the United States and its Pacific allies. Ukraine also seeks allies in Europe and in the United States and has discussed joining NATO for a number of years. But both seek no additional territory and are not and have not ever been in the business of grabbing territory over which they do not have sovereignty.

Stephen Blank, one of America’s top Russian experts, explains Russia’s mindset by noting that Catherine the Great, the last empress of Russia, was once asked how she envisioned keeping Russia’s borders secure. Her response was “I have no way to defend my country other than to expand its frontiers.” Henry Kissinger once commented on the long-held conventional wisdom that at the height of the Cold War, the Soviet Union’s feelings of being “surrounded” by U.S. military bases was understandable, although strange coming from a country that encompassed fifteen time zones!

For China, Xi Jinping believes China is destined to be the ruler of the world to which all other nations should bow. It is not as if China has had global military and political leadership thrust upon it like the United States did after its heroic fight to win World War II and save the world from Japanese imperialism and Nazi genocide. No, China has grabbed power, primarily economic, through criminal measures such as currency manipulation, debt-trap diplomacy, illegal trade activity, slave labor pricing, and overall economic coercion—tragically facilitated by elements in the industrial world that were willing to accommodate Chinese economic imperialism.

China now is adding markedly to its military capability, in a buildup that the U.S. commander of Strategic Command has called breathtaking. China also is now on pace to have the largest navy in the world and a genuine nuclear triad of bombers, submarines, and intercontinental ballistic missiles.

But China’s military capability is not a deterrent in the way Americans and their allies think of deterrence. China seeks to use its military in a coercive way, where China can push around nations it wants to punish. Beijing seeks, as the great military philosopher Sun Tzu once wrote, to win a war without having the other guy even trying to fight.

Indeed, at a minimum, China is increasing its nuclear forces a minimum of three to fivefold (depending upon the number of nuclear forces one thinks China currently maintains). U.S. intelligence sources believe that China will have at least 1,000 warheads by 2030. Other top analysts believe that number will likely reach 2,500 by 2030—or sooner—as the Chinese rapidly build silos and missiles. As for Russia, Moscow has twenty-one new types of nuclear systems under deployment or development now and can add thousands of warheads to its current nuclear arsenal—more than half of which exists outside of the limits imposed by the 2010 New START Treaty, recently extended for five more years.

As Brad Roberts of Lawrence Livermore National Laboratory and General John Hyten, the recently retired deputy chairman of the Joint Chiefs, both told the country, the Russians (and Chinese) have adopted an escalate to win strategy, where they would threaten to use a limited number of nuclear strikes, in a regional conflict over Ukraine or Taiwan, to coerce the United States and its allies not to intervene in the conflict and come to their assistance.

Thus, Moscow and Beijing see deterrence as a tool to stop the United States from acting in a defensive manner while also allowing Moscow and Beijing to act offensively in the pursuit of hegemonic objectives. Vladimir Putin wants to recreate the Soviet empire in countries formerly part of the USSR because, as U.S. ambassador to Russia Michael McFaul explains, he fears their push toward democracy would ignite a similar prairie fire in Russia itself. China, too, sees Taiwan’s representative government as striking at the heart of the Chinese Communist Party’s illegitimacy, especially as the latter seeks to be the sole key power in the Western Pacific and then ultimately worldwide.

But more importantly, each country—Russia, and China—seeks to change the international rules. The post-WWII rule book was indeed created in large part through U.S. leadership. And while such rules did benefit the United States, the rules also greatly benefit over 100 other countries around the world where more freedom and prosperity emerged in the many decades after 1945 than at any other time in world history. The rules by which Russia and China wish to live by would, of course, benefit Moscow and Beijing—but not benefit any other nation except those who accepted serf status.

The United States is thus approaching a new window of vulnerability over this current decade, as it downsizes some of its legacy military systems to generate the research and development dollars to adopt innovative technologies. Although this gap will close by the end of the current decade, challenges remain in the interim.

Furthermore, the United States has serious difficulty passing a defense budget “on time,” which means new projects are stopped, new spending needed for acquisitions is slow rolled, and planning within both the Defense Department and industry gets truncated. Not only does this harm U.S. defense planning, but it also undermines U.S. allies’ efforts to buy modern U.S. military equipment and secure U.S. military support. For example, the United States will not get to take advantage of the $30 billion in additional defense spending that recently passed the House as part of the National Defense Authorization Act until the middle of 2022.

The upcoming U.S. national security review has an opportunity to address some of these problems. The United States should embrace a strong air and missile defense initiative—a technology we are capable of deploying but have not determined that it is consistent with strategic and regional stability—as a critical counter to limited nuclear strike threats by Russia and China. Added to that is the key requirement of getting U.S. allies to markedly improve their own military capabilities. The United States has a fairly understandable future roadmap that it needs to follow, though time will tell if policymakers have the foresight to pursue it.

Peter Huessy is founder and President of GeoStrategic Analysis of Potomac, Maryland.