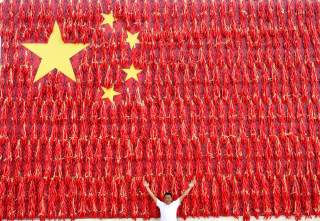 “You don’t do this with the Chinese,” said one of China’s former officials to the Washington Post this week. “You don’t triumphantly proclaim all their concessions in public. It’s just madness.”

Beijing officials do not know what to think in the aftermath of Saturday’s dinner in Buenos Aires between President Donald Trump and Chinese ruler Xi Jinping. As the Post reports, “One former official said the president’s antics had puzzled and angered his Chinese counterparts.”

Madman or genius, Trump is having a great effect on Beijing. And despite the wailing of Chinese officials—or maybe because of it—that looks like a good thing for the United States.

For far too long, China’s smug leaders thought they had American counterparts where they wanted them. A succession of presidents, from the 1970s to this decade, believed the success of the Communist Party of China was in the interests of the United States of America.

Trump in his first year as president was little different from his predecessors in this regard. President No. 45 frequently and inappropriately referred to Xi in gushing terms, talking about a “friendship” that did not in fact exist.

Trump still flatters the Chinese supremo—he did so this week and his compliments are still inapt—but this year his administration has mixed nice words with less-than-friendly actions. Observers have used the Trump-in-a-China-shop imagery, and that just about sums it up.

Perhaps American presidents, due to their central place in the international system, need to exude reliability and constancy, but that system itself could use some shaking up. The liberal world order, after all, is not adequately defending itself from Beijing’s increasingly dictatorial initiatives.

So it’s good to see Chinese officials on the back-foot. They believe they had two tentative deals, negotiated by Commerce Secretary Wilbur Ross and Treasury Secretary Steve Mnuchin, pulled out from under them by an unsatisfied Trump. That, of course, made the Chinese upset.

Chinese officials are, in reality, upset because Trump has begun to spurn the advice of those who counsel accommodation with Beijing, like Mnuchin, and has begun to effectively and sometimes harshly use American power to accomplish American objectives. “How could you negotiate with someone when he puts a knife on your neck?” asked Wang Shouwen, a deputy trade negotiator, at a press conference in Beijing in September.

That is how the Chinese like to negotiate, at least when they hold the weapon. What they are really complaining about is that the changes Trump demands are ones they cannot, as a practical matter, make.

Larry Kudlow, director of the president’s National Economic Council, at the Wall Street Journal CEO Council on Tuesday tried to allay concerns, presumably those in Beijing as well as in the United States. “I don’t think these trade talks are designed to completely change the system,” he said.

But that is exactly what Trump should be trying to do. And if he does not have that goal, there is no point in negotiating.

Chinese theft of American intellectual property—occurring for decades—has become even more integrated into China’s economic system. Made in China 2025, Xi Jinping’s 10-year initiative to achieve dominance in first ten and now eleven sectors, requires tech from abroad. Given the ambitious timeframe Xi announced in 2015, China can meet the deadline only by obtaining technology by underhanded means.

Chinese analysts are franker than Kudlow. Domestic reforms the United States wants are “extremely difficult as such moves involve the country’s reputation, the party’s authority, and the structure of the domestic economy,” Wang Peng of Renmin University of China told Bloomberg. Moreover, China’s system is regressing under Xi, who since 2012 has been reversing reform and returning China to an even more state-dominated and closed system.

And there may even be more to it than that. “The conflict between China and the United States is a competition between two different civilizations and value systems,” wrote

Zhang Lin, a Beijing-based commentator, in an op-ed in the South China Morning Post.

Zhang notes the United States is prepared to accommodate China but not its state model so that Washington is now “staging a cold war to defend its core values.”

Zhang’s assessment looks correct. Because the “clash” he writes about is looking increasingly existential in nature, the American public should be prepared for a long fight. Jack Ma of Alibaba Group in the middle of September talked about a two-decade “mess” between the United States and China.

“This is a competition of endurance to see who breaks first, Yu Yongding of the Chinese Academy of Social Sciences told the Wall Street Journal this week. That, of course, is true, but it’s more precise to say this is a competition in which the winner will be the side that better understands what is at stake and acts accordingly.

Does Trump understand? On Saturday, by agreeing to a ninety-day truce, he looked like he had shied away from confronting Xi. By Tuesday, however, he was back on the offensive, renewing the confrontation by tweeting “I am a Tariff Man.”

The American president, with unsettling tactics, is keeping everyone off balance. To prevail in this “contest of the century,” however, he will need to do more than just aggravate the Chinese.