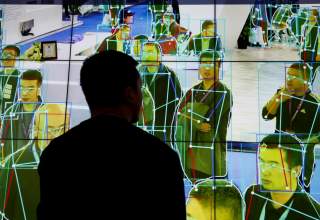 OVER THE past year, I have been collaborating with a prominent leader in the technology industry to combine his decades of experience advancing frontier technologies, on the one hand, and my decades of experience in national security decisionmaking, on the other. Together, we have been trying to understand the national security implications of China’s great leap forward in artificial intelligence (AI). Our purpose in this essay is to sound an alarm over China’s rapid progress and the current prospect of it overtaking the United States in applying AI in the decade ahead; to explain why AI is for the autocracy led by the Chinese Communist Party (hereafter, the “Party”) an existential priority; to identify key unanswered questions about the dangers of an unconstrained AI arms race between the two digital superpowers; and to point to the reasons why we believe that this is a race the United States can and must win.

WE BEGIN with four key points. First, most Americans believe that U.S. leadership in advanced technologies is so entrenched that it is unassailable. Likewise, many in the American national security community insist that in the AI arena China can never be more than a “near-peer competitor.” Both are wrong. In fact, China stands today as a full-spectrum peer competitor of the United States in commercial and national security applications of AI. Beijing is not just trying to master AI—it is succeeding. Because AI will have as transformative an impact on commerce and national security over the next two decades as semiconductors, computers and the web have had over the past quarter century, this should be recognized as a matter of grave national concern.

Second, China’s zeal to master AI goes far beyond its recognition that this suite of technologies promises to be the biggest driver of economic advances in the next quarter century. For the Party, AI is mission critical. The command of 1.4 billion citizens by a Party-controlled authoritarian government is a herculean challenge. Since the fall of the Soviet Union, Americans have been confident that authoritarian governments are doomed to fail—eventually. But AI offers a realistic possibility of upending this proposition. AI could give the Party not just an escape hatch from the “end of history,” but a claim to advance a model of governance—a national operating system—superior to today’s dysfunctional democracies. As one Democratic presidential candidate put it: “China is using technology to perfect dictatorship.” It’s a value proposition that resonates with many leaders around the world. As former Google CEO Eric Schmidt has argued: “if the Soviet Union had been able to leverage the kind of sophisticated data observation, collection and analytics employed by the leaders of Amazon today, it might well have won the Cold War.”

Third, while we share the general enthusiasm about AI’s potential to make huge improvements in human wellbeing, the development of machines with intelligence vastly superior to humans will pose special, perhaps even unique, risks. In 1946, Albert Einstein warned, “the unleashed power of the atom has changed everything save our modes of thinking, and thus we drift towards unparalleled catastrophe.” We believe the same could be said of AI. Henry Kissinger has identified these risks in what we call “Kissinger’s Specter.” In his words, AI threatens an unpredictable revolution in our consciousness and our thinking, and an “inevitable evolution in our understanding of truth and reality.” In response to Einstein’s insight, the technologists and strategists who had built and used the bomb to end World War II joined forces to find ways to prevent a nuclear World War III. Meeting the challenges posed by AI will require nothing less.

Fourth, China’s advantages in size, data collection and national determination have allowed it, over the past decade, to close the gap with American leaders of this industry. It is currently on a trajectory to overtake the United States in the decade ahead. Nonetheless, if the United States will awaken to the challenge and mobilize a national effort, we believe that it can develop and execute a winning strategy.

For many readers, AI is just the latest bright, shiny object on the technology horizon. A brief explainer to provide some further context may be helpful.

THOUGH STILL in their infancy, AI technologies will be drivers of future economic growth and national security. From facial recognition and fintech to drones and 5G, China is not just catching up. In many cases, it has already overtaken the United States to become the world’s undisputed No. 1. In some arenas, because of constitutional constraints and different values, the United States willfully forfeits the race. In others, China is simply more determined to win.

China’s AI surge is so recent that anyone not watching closely has likely missed it. As late as 2015, when assessing its international competition, American industry leaders—Google, Microsoft, Facebook and Amazon—saw Chinese companies in their rearview mirrors alongside German or French firms in the third tier. But this changed three years ago—in 2016—when leading AI application company DeepMind fielded a machine that defeated world champion Lee Sedol in the world’s most complex board game, Go. Even after several American companies’ machines had bested the chess masters of the universe, most Chinese remained confident that machines could never beat Go champions, since Go is ten thousand times more complex than chess. Thus, DeepMind’s decisive victory became for China a “Sputnik moment”—a jolt as dramatic as the Soviet Union’s launch of the first satellite into space that sparked America’s whole-of-nation surge in math and science, NASA’s creation and the original “moon shot.”

Kai-Fu Lee’s book AI Superpowers offers an insightful summary of China’s engagement in the field. It began with President Xi Jinping’s personal reaction to the defeat of the world’s Go champion. Declaring that this was a technology in which China had to lead, he set specific targets for 2020 and 2025 that put China on a path to dominance over AI technology and related applications by 2030. Recognizing that this would have to be led by entrepreneurial companies rather than agencies of government, he designated five companies to become China’s national champions: Baidu, Alibaba, Tencent, iFlytek and SenseTime. Twelve months after Xi’s directive, investments in Chinese AI startups had topped investments in American AI startups. By 2018, China filed 2.5 times more patents in AI technologies than the United States. And this year, China is graduating three times as many computer scientists as the United States.

In contrast to nuclear weapons—where governments led in discovery, development and deployment—AI and related technologies have been created and are being advanced by private firms and university researchers. The military establishments in Washington and Beijing are essentially playing catch-up, adopting and adapting private-sector products.

Consumers’ choices of products in markets speak for themselves. In fintech, China stands alone. Tencent’s WeChat Pay has nine hundred million Chinese users, while Apple Pay only has twenty-two million in the United States. And when it comes to capability, WeChat Pay can do much more than Apple Pay. Chinese consumers use their app to buy coffee at Starbucks and new products from Alibaba, pay bills, transfer money, take out loans, make investments, donate to charity and manage their bank accounts. In doing so, they generate a treasure trove of granular data about individual consumer behavior that AI systems use to make better assessments of individuals’ credit-worthiness, interest in products, capacity to pay for them and other behavior. In mobile payments, Chinese spend $50 for every dollar Americans spend—in total, $19 trillion last year. U.S. mobile payments have yet to reach $1 trillion. Credit cards are as old-fashioned to Chinese millennials as handwritten checks are to their American counterparts. Mark Zuckerberg has noticed: Facebook’s major moves this year into digital payments, including the recent introduction of Facebook Pay, are copying Tencent, rather than the other way around.

In facial recognition, the world’s most valuable AI startup is Chinese company SenseTime—a company whose headquarters one of the authors visited in October. (While there, this author also toured Zhongguancun—China’s version of Silicon Valley—guided by Kai-Fu Lee, whose hedge fund is one of the leading venture capital investors in Chinese AI startups.) In last year’s international competition for facial recognition, Chinese teams claimed the top five places. Chinese firms—such as Hikvision and Dahua Technology, which control a third of the world’s security camera market; Tiandy, whose cameras need light from only a single star at night to capture high-definition color images; and Wuhan Guide Infrared, which specializes in infrared and thermal imaging—are working hand in glove with their government to perfect facial recognition for profit and control. In this domain, there is no U.S.-China contest; the United States has essentially conceded the race because of concerns over the average individual’s privacy, and deep reservations about how this technology could be deployed. Westerners were alarmed in 2017 when researchers at Stanford created an AI algorithm that could detect with shocking accuracy individuals’ sexual orientation simply by scanning a single photo. It does not take much imagination to consider how less socially liberal governments would apply this technology. So while San Francisco recently banned facial recognition technologies, the Party has given China’s top four facial recognition firms access to its database of over 1.4 billion citizen photos. One well-informed venture capitalist in this arena estimates that Chinese facial recognition firms have one million times more images than their U.S. counterparts.