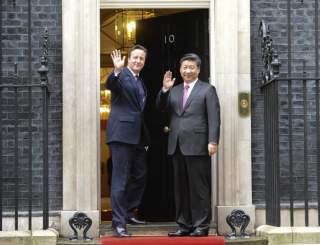 Xi’s October visit to Britain is the latest demonstration of growing Anglo-Chinese economic ties. According to one recent report, China has dramatically and rapidly increased its investment in Britain from just $100 million in 2005–06 to $8.46 billion in 2014–15, while China is now Britain’s sixth-largest export market.

There are strong financial ties too: before Xi’s visit, Britain’s banks were given the green light to issue Chinese Treasury bonds, marking the first time that international banks have been permitted to issue renminbi-denominated Chinese sovereign debt. Britain has even pledged to join the Asian Infrastructure Investment Bank (AIIB), a decision that earned the Obama administration’s disapproval.

Britain and the United States also share important military interests, and one of the world’s strongest military and intelligence sharing arrangements. The Royal Air Force is the second-largest contributor to the ongoing air campaign against the Islamic State, while British soldiers comprised the largest non-American contingent in the wars in Iraq and Afghanistan.

Decades of defense cooperation have institutionalized the Anglo-American partnership to a high degree, including strong bilateral military and intelligence ties. And though there have been differences of opinion on some issues, such as the 2013 decision on military intervention in Syria, American and British interests remain broadly aligned.

Even without these factors, it is important to remember that there is a qualitative difference between economic and security ties. Other U.S. allies have pursued strong trade ties with China without aligning with them on security matters. Australia, for example, is a major trade partner of China, supplying natural resources and raw materials to power China’s economic boom. In June 2015, the two countries even finalized a free trade agreement that allows imports from Australia to enter China duty-free.

Despite this, Australia has remained a close ally of the United States. Just last week, Australia’s defense minister publicly announced her support for America’s freedom of navigation operation in the South China Sea. And though Australia does participate in joint naval exercises with China—one was set for this week—such exercises are commonplace, and do not necessarily indicate any strategic alignment with China. Indeed, the United States and China have in the past themselves participated in RIMPAC exercises with countries including the Philippines and Japan.

As the Australian example shows, it is entirely possible for a country to have strong economic ties with China while remaining aligned with the United States on security issues. Policymakers shouldn’t worry about the state of the U.S.-UK special relationship. President Xi’s visit to the United Kingdom was simply a natural step for two countries which share growing trade ties. Anglo-American relations are built on a strong foundation of both economic ties and common security concerns. British trade with China can’t change that.

Emma M. Ashford is a visiting research fellow at the Cato Institute.

Eric Gomez is a research associate for defense and foreign policy studies at the Cato Institute.