China Is Capitalizing on the West's Mayhem 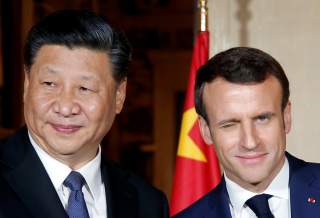 At the recent World Economic Forum in Davos, the West seemed to have lost its swagger.  The leaders of the United States, Great Britain, and France were all MIA—Donald Trump wrestling with the longest government shutdown in history, Theresa May suffering from a humiliating defeat of her Brexit deal, and Emmanuel Macron fending off the Yellow Vest protests. Meanwhile, in his speech at Davos, Chinese vice president Wang Qishan advocated for international cooperation, a bigger economic “pie” for all, and global technological governance.

This example highlights Western discord at a time of growing Chinese global leadership.  If global leadership is China’s ultimate goal, then does China’s intended leadership style lie within its history? Some experts accept China’s eventual rise to global hegemony, yet history shows that China maintained tenuous control over its neighbors. For this reason, China’s foreign policy aims to incentivize the cooperation of its neighbors through the promotion of Confucian norms and by providing economic opportunity to foreign governments.

When Westerners think of the tributary system, they conjure foreigners meekly shuffling to a palace, kowtowing as they ascend steep steps of ornate reception halls to meet the emperor. John King Fairbank described China’s ancient foreign affairs as “suzerain-vassal relations . . . a mechanism by which formerly barbarous regions outside the empire were given their place in the all-embracing sinocentric cosmos.” This system began as early as the Qin and Han dynasties (221 BC to 220 AD), matured during the Tang, Song and Yuan dynasties (618 AD to 1368 AD), peaked during the Ming Dynasty and declined during the Qing Dynasty (1368 AD to 1911 AD), a total period of about 2,100 years.

Pomp and circumstance abounded in tributary ritual, yet the relationship between the zongzhuguo (宗主国), or suzerain, and the fanshuguo(藩属国), or vassal, was much more dynamic. Chinese Academy of Social Sciences scholar, Zhou Fangyin, argues that the relationship between the Middle Kingdom and periphery states was much less an example of top down command; it was more of an example of game theory, with two sides making strategic decisions based on expected payoffs. Assuming that the Chinese government could either adopt a conciliatory policy or a punitive expedition, and the periphery state could either oppose China by force or submit to nominal rule, the two sides chose a Nash equilibrium whereby China would be conciliatory and the periphery state would submit. An excerpt from an early work by Han scholar Ban Gu sums up the relationship.

It is not possible to till the lands of barbarians, neither will barbarians subject themselves to your rule . . . we cannot administer over the barbarians, and the edicts, decrees and our calendar cannot be applied to the barbarians; if the barbarian invades, we shall defend ourselves and punish them. If the barbarians desire to pay tribute to China and follow the customary rituals, their tribute shall be received properly, and we shall give unto them in return. We shall appease and bind them for the long time, and never lose our propriety.

In plain terms, China was perfectly fine with “appeasing” the surrounding states so as not to expend unnecessary energy ruling them. Yet, there are several instances when the peripheral state—whether emboldened by a long period of internal stability, a new leader emerged, or the Chinese empire declined—would violate the agreement and invade China’s borders, or in Nash’s terms of game theory, “cheat.” However, in these instances the invading nation still paid tribute. The periphery state wore a façade of subservience while increasing its gain.

For instance, the Toungoo kingdom in Burma pestered the Chinese with relentless attacks along the Yunnan border. As the Toungoo government exhausted resources and the Chinese government grew in strength, the Toungoo began paying tribute. As a result, the Toungoo voluntarily became a vassal state for economic gain. But the relationship was tenuous at best; soon the Toungoo resumed its border raids.  Emperor Qianlong (1711 to 1799) sent a limited number of troops to fend off what he called “bandits,” but also realized that Burma was a remote place and that subduing it would be a waste of energy and resources. The relationship between the Qing court and the Toungoo was not the ideal simple suzerain-vassal relationship; the Toungoo voluntarily submitted itself to be a vassal because it saw specific economic benefits from trading with the Qing government. The Qing never had a tight grip on the Toungoo because direct rule remained geographically unfeasible and politically untenable.

Other examples are the Chinese Sui, Tang, and Ming dynasties’ (581 AD to 1368 AD) relations with the kingdoms on the Korean Peninsula. Chinese court records refer to Korea as a “model vassal state.” Yet, there were many instances when the Korean kingdoms also “cheated.” When the Koguryo kingdom invaded Northeast China in 1388, the livid Chinese Emperor Wen of Sui sent three hundred thousand troops and successfully subdued the invasion. Koguryo paid tribute for three years afterwards, but soon stopped regular payments. In the following twelve years, it only paid once. The Korean Peninsula eventually settled into a subservient role to the Ming court, which lasted for generations. Yet, they were not forced to do this. Like the Burmese Toungoo, it decided that being a vassal was in Korea’s best interest. And just like the China-Burma relationship, the China-Korea relationship was also loose. Zhou Fangyin explains that the relationship between China and periphery states was “constantly undergoing change, and that it was by no means a rigid mode of behavior or a unilaterally imposed status quo, but instead a complex and dynamic diplomatic phenomenon.”

If the tributary system was not dictatorial, what qualities led to Chinese leadership in Asia?  The first is Confucian principles which the surrounding states adopted as a result of the sheer pull of Chinese culture. Fudan University professor Jian Junbo explains the much-adopted standards of ren (仁) and li (礼). “Ren is the combination of various beautiful morals, which includes love, justice, benevolence and charity, and Li includes structure, moderation, protocol, and hierarchy.”

Second, the Chinese government provided economic opportunities to the periphery states. Vassal states received gold, silver, bronze, silks and weapons from China, while China received rare items such as elephant tusks, silver, tea and spices. The aforementioned Toungoo kingdom in Burma and Korean kingdoms all voluntarily submitted to Chinese hegemony because they saw specific economic benefit in dealing with the Middle Kingdom.

In practice, the tributary system was not rigid. It was a dynamic relationship where the Chinese government and the periphery state both felt that they received tangible benefits.  The Chinese set cultural and ethical standards of the region, and periphery states gained access to the Chinese market. This dynamic is as true today as it was in history. In the twenty-first century, China is creating norms that will incentivize neighboring countries to follow China’s leadership in this well-established Asian order.

The views expressed in the article are those of the author(s) and do not necessarily reflect those of the U.S. government.

Leland Lazarus is a Foreign Service Consular Officer currently serving at the U.S. Consulate General in Shenyang, China.  Before joining the State Department, Leland worked as an Associate Producer at China Central Television, and taught English as a Fulbright scholar in Panama.  Fluent in both Mandarin and Spanish, he holds an M.A. in U.S.-China Relations at the Fletcher School of Law and Diplomacy, and a B.A. in International Relations at Brown University.

John Brunetti is a Foreign Service Officer who recently served as the General Services Officer at the U.S. Consulate General in Shenyang, China. Prior to entering the Foreign Service, John worked as a Solution Consultant for Oracle and as an associate at an admiralty law firm in New York. John received his commission in the US Naval Reserve in 2009 from the United States Merchant Marine Academy (USMMA) in Kings Point, NY. He currently serves within the Naval Control and Guidance of Shipping (NCAGS). Prior service includes Maritime Civilian Affairs Security Team (MCAST) and in Operation Enduring Freedom (OEF).