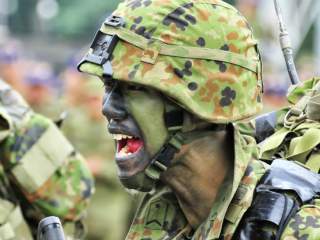 Hawaii belongs to Japan, the Japanese press suddenly proclaims. Tokyo publishes ancient maps and documents that purport to show that the Hawaiian islands were historically part of the Japanese homeland until they were illegally annexed by the Americans. To hammer the point home, a Japanese warship sails into Hawaiian waters.

Does this sound totally insane? It's no more crazy than Chinese claims that the Ryukyu Islands—which include the island of Okinawa—belong to China rather than Japan.

In 2013, the world let out a collective "Say what???" when Chinese officials, scholars and journalists suggested that the Ryukyus belong to China. The claims, based on the fact that the Ryukyu islanders paid tribute to China more than six hundred years ago, were not officially endorsed by the Chinese government, but neither were they denied.

Analysts suggested that questioning Japanese sovereignty over the Ryukyus was just a way to pressure Japan over the Senkaku Islands, a chain of uninhabited islands in the East China Sea that are administered by Japan and claimed by China. Chinese and Japanese aircraft have confronted each other near the Senkakus, while Chinese coast-guard vessels entered Japanese territorial waters around the islands last October. The Chinese moves have sparked a Japanese military buildup.

World attention has been focused more on Chinese claims in the South China Sea, and to a lesser extent on the Senkakus. But disputing sovereignty over the Ryukyus and Okinawa, even if it’s only a negotiating gambit, is far more dangerous. Until recently, major powers demanding territory from each other was not uncommon. Go back just one hundred years ago, and France and Germany contesting Alsace-Lorraine would have raised a sigh but not an eyebrow.

But since 1945, the territorial integrity of major powers has not been questioned. The thought that Russia might declare its 1867 treaty with America invalid and demand Alaska back is so inconceivable as to be satire or lunacy. The fact is that major powers don't directly fight each other anymore, but instead use proxies (China and the U.S. battling in the Korean War might be an exception, though China arguably was not a major power in 1950).

Whether the Ryukyus really belong to China or not isn't the point. Granted that Okinawa is not a contiguous part of the Japanese home islands, any more than Alaska and Hawaii are part of the continental United States, which doesn't make those two states any less American. Nonetheless, whether China likes it or not, the Ryukyus are considered to be Japanese territory right now. China can no more claim it now than Japan can claim Manchuria and Korea again.

Claiming territory from another major power in the nuclear age is not a smart idea. Though Japan is not as powerful as China, it is a major power, with the world's third-largest economy and a powerful—if nonnuclear—military. Japan is also backed by the United States, which is the world's most powerful nation, is committed by treaty to the defense of Japan, and has a big military base on Okinawa.

No U.S. president could allow China to seize Japanese territory without America being totally humiliated in Asia and around the world. No Japanese government could give back Okinawa and hope to stay in office, and more than Putin could accede to Chinese demands to give back Siberia to China. A conflict over the Ryukyus would inevitably spiral into a larger, multi-state conflict.

Unless you are nostalgic for the last two world wars, let's hope that the Chinese bid for Okinawa is nothing more than posturing.