China is Dominating Scarborough Shoal. Here's Why It Matters. 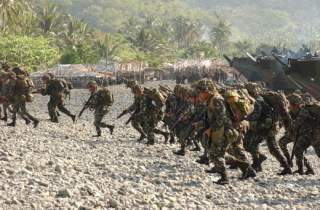 Scarborough Shoal is a settled issue. Not in a good way and not just as a result of Philippines President Duterte’s “ready, fire, aim” approach to statesmanship. It matters not if China builds new facilities there on yet more coral dredged from the seabed. Since the Shoal came to public prominence in 2012 following the Philippine arrest of Chinese fishermen it has been dominated by China’s Maritime Militias. This non-military state-controlled force, along with the ships of China’s Coast Guard, so effectively control the area that even the Philippine government advised its fishermen to avoid this traditional Philippine fishing area.

This is no trivial issue. It threatens the collapse of the South China Sea ecosystem and raises the prospect of regional food shortages. China badly depleted its traditional fishing areas and now expropriates areas that other nations rightfully access. The “Global Commons” shrinks. Far from leading any international effort to preserve the marine resources of the South China Sea, China stands harshly criticized in the UN Permanent Court of Arbitration judgment for “permanent and irreparable harm to the coral reef ecosystem.” The United States’ new mid-Pacific marine sanctuary recently announced by President Obama is important—provided we can enforce it—but it will not compensate for the devastation of the South China Sea ecosystem.

Countering this and related provocations demands a comprehensive strategy. The specific South China Sea challenge requires specific responses, but those must be nested within a more effective regional, national and alliance strategy. Challenges abound. North Korea just detonated another, more powerful nuclear device despite U.S., UN and other efforts since the early 1990s to restrain its nuclear and missile programs. Japan endures Chinese and Russian aerial intrusions at numbers equal to highs experienced in the Cold War, testing their surveillance and response capabilities. Seaborne incursions into the Nansei Shoto – also known as the Okinawa Prefecture—increase in yet another manifestation of China’s Gray Zone efforts.

Before implementing a strategy, our relationships with China and Russia must be reevaluated. In 2009 President Obama told the Chinese delegation at the Strategic and Economic Dialogue that we would continue to talk about human rights because that is who we are. Within a few months we made a decision to forego that policy in view of other pressing issues. Since then the Chinese press has become even more restricted, dissidents more pressured and arrests more frequent. China claimed at the Sunnylands Summit that militarization of the South China Sea would stop. It has not. Three successive visits of three different U.S. Secretaries of Defense to Beijing begat three successive new military aircraft demonstrations. In November 2013 China suddenly announced the establishment of an Air Defense Identification Zone (ADIZ) over the East China Sea while openly coordinating a visit of VP Biden to Beijing within weeks coming via Tokyo. Worse, the ADIZ claimed rules and procedures more suited to territorial airspace than Global Commons areas, and promised application of "emergency defensive measures" in response to aircraft that refuse to follow the instructions. Then came the G-20 Summit in China and a calculated humiliation of the U.S. delegation. A relationship counselor might term this a one-way arrangement if not one of passive-aggressive abuse. We need to “reset”—to abuse an old phrase – our relationships. China must not be allowed to buy domestic stability at home through the creation of hardship, instability and dissatisfaction in other countries, including ours. We need to find our voice again on human rights, on the wanton destruction of the world’s common environmental heritage, on maritime and aerial intrusions, and many economic and trade matters. We’re allowed to be upset and to take action when our interests and those of our allies and friends are repeatedly assailed.

North Korea is a separate category, for their nuclear threat among many other reasons. China and Russia must be made aware of a compelling reality: if they are not willing or able to help us restrain North Korea, then we will have no choice but to strongly enhance and reinforce our alliance capabilities. And then we need to do just that.

A strong, active and engaged U.S. military is necessary. It’s not sufficient by itself but it is ever so necessary. A report by the Center for Strategic and International Studies said it best:

Given rapid advances in Chinese military capabilities, the consequences of conflict with that nation and almost unthinkable and should be avoided to the greatest extent possible consistent with U.S. interests. It is therefore critical to achieve the right combination of assurance and dissuasion and to maintain a favorable peace before conflict occurs. At the same time, the ability of the United States to work with allies and partners to achieve those peaceful ends will depend on the perceptions, both of allies and partners and of China, of the U.S. ability to prevail in the event of conflict. U.S. force posture must demonstrate a readiness and a capacity to fight and win, even under more challenging circumstances associated with A2Ad and other threats to U.S. military operations in the Western Pacific.

A third component is to counter China’s Gray Zone challenges. This area is not suited for direct action by our military forces, but it is amenable to U.S. leadership and the active engagement of our allies and friends based on common interests and our undoubted ability to prevail.

Our pursuit of global efforts on climate change is well known. We should enlist a powerful coalition of nations to quickly begin strong and effective efforts to salvage the sea life and fisheries that may be saved in the South China Sea. That effort must then be extended to the rest of the region and then to the greater Pacific.

Creation of strong and numerous law enforcement capabilities among our allies and friends in the region must be greatly enhanced. This means not only ships, but also ubiquitous and pervasive surveillance means, creation of a “common operating picture” available for real-time location of all vessels, the creation of more ports and airfields around the littoral to support that, and more punishment for violators. Gray Zone force must result in countervailing Gray Zone force.

Image: U.S. and Filipino Marines on a joint amphibious assault exercise in 2004 in the Philippines. Wikimedia Commons/U.S. Marine Corps