China Expects the U.S. To Roll Over 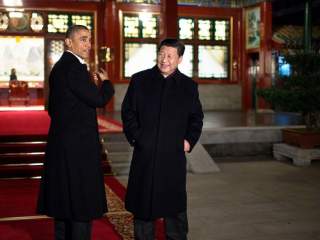 Former Pacific Commander and former Director of National Intelligence Dennis Blair has rendered yet another valuable public service, this time as head of Sasakawa Peace Foundation USA (SPF). The organization has produced a comprehensive report assessing China’s evolving strategic posture and presenting alternative scenarios for the U.S.-Japan alliance response to the ensuing threats and opportunities. While the paper is dispassionate and clear-eyed about the risks and openings presented by China's rise, the implications are ominous.

The paper posits four possible outcomes for a future China: a powerful and benevolent state; a powerful and aggressive state; a weak and inward-looking state, or a weak and aggressive state. The study offers a caveat, however: “It is dangerous to base an Alliance strategy on a single future for the China of 2030 . . . [It] . . . will not fall neatly into any of the four alternatives . . . The most likely scenario is elements of different futures. Theoretical neatness aside, the report also states that "current trends project a somewhat more powerful and aggressive China than the United States and Japan have dealt with in the past."

Indeed, on its own terms the report already identifies China's present course as increasingly threatening. We don't need another ten to fifteen years to know from the preponderance of evidence that we already face the worst-case scenario: a powerful and aggressive China that is on course to become even more powerful and more aggressive.

The even more powerful nature of this "future" China, the report prognosticates, would consist of a predominantly market-based economy with growth of five to seven percent; increased restrictions on foreign businesses in China; strongly mercantilist policies overseas; and high defense spending approaching that of the United States. Most of these characteristics are already true of today's China or are rapidly becoming the status quo.

As for the aggressive part of the picture, this "future China" would use its "economic and military advantage . . . to support its current core interests—primacy of the CCP, reunification with Taiwan, secure administration of Tibet and Xinjiang, and success in pursuing its claims in the East and South China Seas"—again, all of which China is now doing. (An additional area would be expansionist claims vis a vis India and the Indian Ocean which China is not yet pursuing vigorously.)

Support for the near-certainty of an increasingly powerful and aggressive China can also be found in other sections of the text. For example, Xi Jinping is said to see his “new model of great power relations” as the key to a stable U.S.-China relationship. The report offers two alternatives to understand “Beijing’s calculus for achieving this stability”. In a best-case scenario, the Chinese seek to ensure that competitive elements in the U.S.-China relationship remain firmly under control— roughly analogous to the period of U.S.-Soviet détente during the Cold War. During that earlier period of détente, the Soviet Union cracked down on internal dissent, conducted an increasingly interventionist foreign policy in Latin America and Africa, and invaded Afghanistan—hardly a posture the West would want China to emulate.

Additionally, there is the report's “less benign assessment” of China's new model. China is using the framework of great power relations to seek U.S. acquiescence to China’s definition of “core interests,” which include maintaining China’s political system, territorial claims, and way of shaping and applying international rules and regimes. In other words, the United States would accept China’s regional, and quite possibly global hegemony. Under both the “best case” and “less benign” scenarios, the U.S. response must be either capitulation or confrontation.

Interestingly, developments under Xi’s leadership portrayed as good news for the West are things that make the Communist regime internally stronger and more efficient—economic reforms eliminating “excessive regulation and local protectionism [that] have made the market inefficient.” To the extent those reforms produce benefits for the Chinese people, they presumably increase the regime’s legitimacy, both domestically and internationally. One may very well hope that such news of increasing influence would induce a more relaxed attitude among Chinese leaders regarding their place in the world.

More realistically, however, given the Communist Party of China’s implacable view of the United States and its allies as the enemy—despite more than four decades of Western engagement —and its expectation that it can achieve U.S. “acquiescence” to the dominance Xi seeks, China will almost certainly become even more ambitious and aggressive.

The report lists "policies of the United States" as the first among the "external factors [that] will certainly influence China’s future course." But it describes the official American perception of China more in terms of diplomacy and engagement than deterrence and containment. The United States views China less as an existential threat than as a challenge to its friendships, alliances, and military and economic leadership in the region. Additionally, the study sees Japan as having an equally muted reaction to China’s saber-rattling:

“[B]oth the United States and Japan have extensive commercial ties to and personal contacts with China, and China presents only an ambiguous military threat. The underlying Western fear since Nixon's opening to China and through eight subsequent administrations is that "treating China as an enemy will make it one."

There is the risk of creating a self-fulfilling prophecy. If the United States and Japan base their policies on the expectation of a powerful and aggressive China, and take preparatory measures that Beijing interprets as a containment strategy, China might decide to adopt aggressive policies to defend itself, leading to a cycle of armament and tension that neither side desired.

China's leaders clearly understand this Western reticence and consistently exploit it to their advantage, pressing at each incrementally assertive point and expecting the West to exercise the necessary prudence to avoid confrontation and escalation.

In the military and security areas, China has been deterred from direct aggression, but has advanced its interests using sophisticated forms of military coercion and simple gunboat diplomacy, as well as a wide range of nonmilitary activities.

The paper repeats the conventional wisdom that China sees "the need for a peaceful international environment" in order to pursue its domestic economic development. But Beijing relies on an acquiescent and somewhat intimidated neighborhood to ensure the peace while it pursues its ambitious goals by means just short of outright war. The ink was hardly dry on the SPF report when fresh news arrived of an even more threatening move by China on its islands: the installation of anti-ship missiles that will constrain activities of the U.S. and Japanese navies among others.

As the Obama and Abe administrations digest this important SPF report, they will hopefully recognize that the more powerful and aggressive China is already here. The future is now, and it is dire unless U.S. and Japanese policymakers send some strong deterrence and dissuasion messages to China, backed up by meaningful actions. At the very least, that means regular freedom of navigation and overflight operations in the East and South China Seas that actually challenge China's unlawful sovereignty claims—not merely innocent passages which effectively reinforce them.

Joseph A. Bosco served in the office of the secretary of defense, 2002-2010. He is a member of the U.S.-China task force at the Center for the National Interest.