China Is Flunking Its Most Important Geopolitical Test 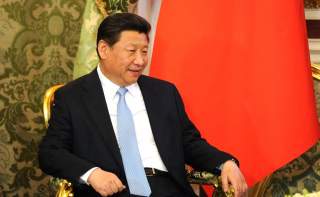 Past presidents have sought Beijing’s cooperation to deal with Pyongyang, but among a myriad of other U.S.-China topics with a sense of “business as usual.” Under President Donald Trump, the United States is leading overdue, intense pressure against the Democratic People’s Republic of Korea (DPRK) by placing its threat as the top priority in dealing with the People’s Republic of China (PRC). Trump already hosted PRC ruler Xi Jinping for an early, cozy summit. The PRC has unique, overwhelming leverage against the DPRK. China should use its well-honed tactics of applying incremental pressure to stop the DPRK’s nuclear and missile programs, which would prove its willingness to impose unilateral sanctions against other countries. China’s coercion has been portrayed by the image of “salami slicing,” especially to expand claims in the South China Sea. So is China meeting or failing the latest test on North Korea?

No Longer Business as Usual

Briefing reporters in early April the upcoming visit of Xi Jinping to meet with Trump, an unnamed senior official of the administration said that its new “results-oriented” approach to the U.S. engagement with China focuses on urgent cooperation on North Korea. After about two decades of U.S. efforts of counting on China’s cooperation to bring about a safe and denuclearized Korean Peninsula, this current try is “a test of the relationship” with China, according to the official. The official also pointed out that almost 90 percent of North Korea’s external trade is with China, so even if China’s political influence might have diminished with North Korea, China’s economic leverage clearly has not diminished.

In an extraordinary briefing for the whole Congress on April 26, the Secretaries of Defense and State, Director of National Intelligence, and Chairman of the Joint Chiefs of Staff warned that “North Korea’s pursuit of nuclear weapons is an urgent national security threat.” They briefed Congress on a new review of policy concerning the DPRK. They noted that past efforts have failed to halt the DPRK’s unlawful weapons programs as well as nuclear and missile tests.

The U.S. Pacific Command’s Commander, Adm. Harry Harris, testified bluntly to Congress: “Kim Jong-un has stated repeatedly that denuclearization is not an option. He is on a quest for nuclear weapons and the ballistic missiles capable of delivering them intercontinentally. The words and actions of North Korea threaten the U.S. homeland and that of our allies in South Korea and Japan.”

Furthermore, at a hearing of the Senate Armed Services Committee, Republican Senator John McCain warned that the DPRK poses a “real and rising risk of conflict.” He noted that, for years, the United States has looked to China, the DPRK’s patron, to bring the regime to negotiate a denuclearized Korean Peninsula. He said that China is the only country with influence on North Korea but has refused repeatedly to exercise that influence. He pointed out that “China has aided and abetted North Korea for decades.” According to the senator, the administration should seek China’s cooperation but not at the expense of vital interests such as alliances and freedom of the sea.

McCain also said that the White House is not recklessly considering a preemptive strike against the DPRK but “exploring every option and the last option—and the least desirable option—is armed conflict.”

Trump warned starkly in late April that “there is a chance that we could end up having a major, major conflict with North Korea.” He also expressed his belief that Xi Jinping is “trying very hard.”

The administration seems willing to test China. Secretary of State Rex Tillerson said that “in the past, the assumption has been the Chinese would only take limited action. We’re going to test that assumption. We’re going to test their willingness to help us address this serious threat that is not only one to the region and to us, but is becoming a threat to China themselves.” He said that Beijing asked Pyongyang not to conduct another nuclear test and warned that regime about China’s unilateral sanctions in the event of such a test.

Still, the United States is no longer patient. Secretary Tillerson told the United Nations Security Council (UNSC) on April 28 that “this new pressure campaign will be swiftly implemented and painful to North Korean interest” given the “catastrophic effects of a North Korean nuclear strike.” Within hours, North Korea underscored that urgent warning by defying international pressure with a ballistic missile test (that failed and blew up over North Korean territory).

The National Security Council’s senior director for Asia, Matt Pottinger, also warned that the DPRK regime might pose a threat, not only to bolster its power but also as blackmail against the Republic of Korea to achieve ambitious objectives, which include coercive unification of the Korean Peninsula and coercive pressure against the United States to leave the peninsula and abandon alliances.

China has Power to Stop North Korea if Willing

Given the U.S. pressure, particularly in April, a PRC official who is chairperson of the National People’s Congress Foreign Affairs Committee, Fu Ying, argued that China strongly opposes nuclear proliferation, lacks leverage and stands for dialogue to address the problem (i.e., not sanctions).

In fact, China has a record of increasing incremental economic, maritime law-enforcement, military and other coercive pressure against other countries to advance China’s goals. China’s proactive “salami slicing” is salient in the South China Sea, where the PRC claimed to “respond” to perceived “provocations” against China and then controlled land features in a fait accompli to establish a new status quo. In his testimony to Congress, Admiral Harris pointed out that “China has fundamentally altered the physical and political landscape in the South China Sea through large-scale land reclamation and by militarizing these reclaimed features.”

Is China meeting or failing the Trump administration’s test to address the DPRK’s urgent threat? If China pursues incremental, purposeful pressure against the DRPK, what would be the indicators?

China could use its Coast Guard against North Korean shipping. China could deny use of its ports, airfields and airspace to North Korean ships and planes. Under warnings, PRC citizens could leave the DPRK, undermining “business as usual.” One report suggested that there was such a warning, at least to Korean-Chinese residents in Pyongyang. China could warn against nuclear contamination of the environment for its people to evacuate North Korea or to demand a stop to its nuclear testing. Similar to reported pressure against Taiwan, China could discourage tour groups from traveling to North Korea.

China could completely ban the import of North Korean coal and other commodities that earn foreign exchange. China reportedly halted the import of North Korean coal in February for the rest of 2017 in accordance with a 2016 UNSC resolution. However, that promise came only after importing coal from North Korea worth $1 billion in 2015 and continuing imports in 2016. Moreover, by April, at least one of China’s ports later allowed the docking of North Korean ships loaded with coal. Despite the supposed stop to importing coal, China’s trade with North Korea actually increased 37.4 percent in the first quarter of 2017 compared with that period in 2016. China seems to be continuing a pattern of spotty enforcement of sanctions, even those under the authority of the UNSC with China’s vote in favor.

China could impose an oil embargo against North Korea, which is dependent on China’s oil. If China hints at short-term suspensions of oil supplies, lasting measures would be more effective. The United States has known that China’s oil is the key to leverage. Toward the end of the Obama administration in early January 2017, John Kerry, who was secretary of state at the time, stated that “China provides 100 percent of the fuel that goes to North Korea.” He added that “every airplane, every truck, every car that moves in North Korea gets its fuel from China.”

Kerry also said that Beijing is the “facilitator” for Pyongyang’s banking system and commerce. China could increase the isolation of North Korea’s financial transactions from the international system. China could stop the flow of North Korean guest workers.

In short, China’s claims are not true. China does have overwhelming leverage over North Korea. China has chosen coercive tactics, even unilaterally, against other countries. If China fails the latest test now, then it is not true that China effectively seeks to stop North Korea’s nuclear and missile programs. China cannot keep dangling the bait of “cooperation” on North Korea’s threat and expect the world to bite.

Shirley Kan is a retired specialist in Asian Security Affairs who worked for the U.S. Congress at the nonpartisan Congressional Research Service.