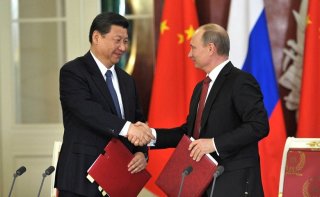 It should come as no surprise that the People’s Republic of China seeks to alter the international order. A desire to enhance its influence under rules of its own making are why Beijing has moved to redefine the maritime patterns of the Western Pacific, alter international economic and diplomatic institutional arrangements and carve out a footing for its interests through development projects. These are the actions of a rising power. For the United States, China’s more-adventurous foreign policy certainly creates a set of unwanted challenges within the Asia-Pacific, but the United States should not overlook that China’s vision is not merely fixated on the Pacific. Chinese engagement in Eurasia is also on the rise. China’s west is an attractive focal point—as it avoids the tensions of East Asia—can serve as a tool for development, and can assist in enhancing security in a region where it is needed. Chinese adventures in Eurasia also facilitate the United States’ interests in Asia.

Throughout most of Eurasia, China’s deepening footprint has been welcomed. The Central Asian republics have long been overly dependent upon economic ties with Russia and underperformed as economies due to substandard infrastructural networks. China, as the eastern neighbor to this region, began to see as far back as the mid-1990s both geopolitical and economic potential in Central Asia. Initial steps taken twenty years ago have led to deep economic ties between Beijing and the capitals of Central Asia. China has built or is building an infrastructural network that includes highways, pipelines, dams, bridges and telecommunication stations. The intensity of investment in Central Asia has strengthened the Shanghai Cooperation Organization and encouraged other major international actors to investigate the benefits of mimicking China by enhancing their footprint in the region.

Farther west, China has intensified relations with the states of the Persian Gulf. China’s thirst for natural-resource deposits has made it the single largest customer of the region’s oil and natural gas. Beijing has enhanced the depth of its diplomatic mission to each Gulf state, been an active if quiet proponent of the Iranian nuclear deal and sought to gain a greater foothold for Chinese commodities within Middle Eastern economies. Looking forward, the Gulf represents a region that will help to determine the health of China. That is why it is essential for Beijing to be well positioned in the region to both impact politics and secure energy.

Energy has become a primary geopolitical concern for China. With the majority of its supply of oil and natural gas imported, the very fuel that maintains the Chinese economic juggernaut is vulnerable to disruption. It is the fear of disruption, whether that fear takes the form of piracy in the straits of the eastern Indian Ocean, regime change or weakness in the Middle East or something unexpected, which has helped to enhance Chinese foreign policy from its largely parochial roots. The desire of Beijing to diversify the paths by which energy arrives in China, to deepen its ties with Eurasian states, and to find new markets for Chinese commodities has led to the formation of a strategy for engagement with “West Asia.” Referred to as “One Belt, One Road” (or colloquially the Belt and Road Initiative), the strategy calls for China to connect the states of Central Asia, South and Southeast Asia, the Middle East and Eastern Africa together through a maritime and overland infrastructural network. It is an ambitious, expensive plan that seeks to bring stability to several regions that remain economically isolated and politically weak.

The United States’ response to the Belt and Road Initiative and to China’s increasing presence throughout Eurasia has been largely muted, as the benefits of such a plan are offset by fears that a push west by China will create a Eurasian sphere of influence for Beijing and/or bring Beijing and Moscow closer together. Such fears should be pushed aside. The United States’ own experiences in Iraq and Afghanistan reveal Eurasia to be a region of shifting political forces that are never easy to predict and virtually impossible to control. China is naturally positioned to exert influence in Central and South Asia as those regions remain sources of global instability. Moscow and Beijing remain suspicious of each other, even after a period of improved relations. The Middle East remains a region of instability and conflict. The United States retains strong strategic partnerships with many GCC states, relationships that China cannot hope to replicate in the near future. Additionally, China’s aspirations for its future relationship with Iran could quickly run afoul of regional Arab states.

If China can contribute to global stability, then why oppose them? China’s rise towards becoming a major power has largely already occurred and opposing all Chinese initiatives will only contribute to greater bilateral hostility. As a global maritime power and the largest developed economy on the earth, the future of the United States is tied to the trajectory of the Asia-Pacific. Yet, the United States is no longer orientated towards positioning substantial military assets within Central and South Asia. The large land force that operated in the Gulf region during the Bush and Obama administrations was an outlier in comparison to the traditional footprint of the United States in the Middle East. The future trajectory of engagement there will return to a balance between air, naval and special operation capabilities. The United States is naturally oriented to serve as an offshore balancer that can operate globally to enhance security, protect commerce and enforce global institutions.

China should move ahead with its Belt and Road Initiative as it provides an effective alternative to further adventures in the Asia-Pacific. Not only will it be able to serve its own core national interests, but it may also help enhance global security.

Jeffrey Payne is the Manager of Academic Affairs at the Near East South Asia Center for Strategic Studies in Washington, DC. The views expressed in this article are his alone and do not represent the official policy or position of the National Defense University, the Department of Defense, or the U.S. government.