China and India Aren't Afraid to Use Money as a Weapon 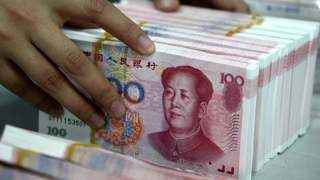 “Major powers have to work with each other even if their interests diverge on some issues,” India’s Foreign Secretary S. Jaishankar stressed at the recently concluded India China Think-Tanks Forum in New Delhi. However, within the next few days, two articles in significant Indian and Chinese dailies seemed to have dampened the spirit of cooperation. Talking about a Chinese consignment worth $2.8 million dispatched to Nepal, a widely circulated Indian newspaper said that the shipment “will severely hit Indian businesses.” A reporter at the Chinese state-run Global Times was quick to respond, insisting the move did not mean that “Chinese goods will push Indian products out of the country.” Impassioned media debates ensued.

While reports of competition between the two rising states is common, such discussions have been frequent since September of last year. Accusing India of imposing an unofficial economic blockade shortly after the promulgation of the Nepali constitution, then prime minister of Nepal K. P. Sharma Oli stepped up his country’s engagement with China. While India denied its involvement, its support of the Madhesis—the minority group protesting against the constitution and leading an economic blockade—was widely acknowledged.

As both states expand their economic ties with other states, it should be remembered that while India and China may have disapproved of economic coercion at international forums, much like great powers in the West, both have used it as an instrument of statecraft. By employing economically coercive measures, like economic blockades, embargoes, financial sanctions, import bans and suspension of aid, India and China have sought to promote their interests and support issues they believe in. Yet, compared to the West, both have often remained reticent about their economically coercive policies.

India’s Use of Economic Statecraft

In 1946, India became the first state to impose economic restrictions on South Africa, to protest against the discrimination of the Indian community living there. After India attained independence from the British rule, the measures continued.

Policies employed to integrate the princely states into the Indian union were also at times economically coercive. The Indian provinces of Hyderabad and Goa faced such measures in 1948 and 1954. In 1987, following a coup d’état in Fiji, India imposed economic sanctions on that country. Like in South Africa, the decision was made to protect the interests of people of Indian origin. The coup had instated Lt. Col. Sitiveni Rabuka as head of state, whose policies were detrimental to Fijians of Indian origin. Proximity to China seems to have invited economic penalization when India imposed a nearly fifteen-month-long trade embargo on Nepal, which partially closed India’s borders with its neighbor in 1989. The action was believed to be India’s response to Nepal’s import of antiaircraft guns from China.

Although India granted Pakistan Most Favored Nation status in 2006, some of New Delhi’s policies have directly or indirectly had an adverse effect on Pakistan’s economy. In 2001, after an attack on the Indian parliament, Delhi imposed sanctions against Pakistan, responding to Islamabad’s lax attitude about the terrorist groups accused of the suicide attack. As External Affairs Minister Jaswant Singh announced, the strength of the High Commissions was reduced, Pakistan High Commission officials were confined to Delhi and overflight was banned. Bus and train services between Lahore and New Delhi were also suspended.

Following the terror attacks on Mumbai in November 2008, the names of terrorist groups operating out of Pakistan came up again. New Delhi decided to adopt measures with new economic repercussions for Pakistan. As New Delhi suspended sporting ties, Pakistani cricket players were kept from playing in the lucrative Indian Premier League (IPL), despite being a part of the matches held earlier in 2008. Later, amid deteriorating peace talks between India and Pakistan, the diktat continued, even as former Pakistani players requested the Board for Control of Cricket in India to allow Pakistani participation in the IPL.

China’s Use of Economic Statecraft

China imposed economic sanctions on Vietnam in 1978, demanding the withdrawal of troops from Cambodia. The same year it also cut its aid to Albania. China’s use of, as well as its threats to use, economic coercion increased steadily in the last few decades, and was often directed against states that hosted or supported the Dalai Lama. In the 1990s, China gave the French government a month to shut down its consulate in Guangzhou and withdrew from negotiations over significant projects like the Guangzhou Metro and the Daya Bay Nuclear Power Station, which were meant to be built in collaboration. Later, in 2006, Beijing canceled an important summit with the European Union as a protest against President Nicolas Sarkozy’s decision to meet with Dalai Lama.

Over the last few decades, China has used economic sanctions to resolve a range of issues. Not only has China sanctioned U.S. companies for supplying arms to Taiwan, but it has also used this form of economic coercion on Taiwanese companies to make them comply with mainland China’s policies. In the past, demands to develop domestic law on economic sanctions have also been noted.

Another Asian state that has been threatened by, as well as faced, Chinese sanctions is Japan. In 2010, China banned the sale of rare-earth materials to Japan as a response to the Japanese navy’s arrest of a Chinese fishing trawler captain. In 2012, China again considered imposing sanctions on Japan, over its policy on the disputed Diaoyu/Senkaku Islands. In an opinion piece, Jin Baisong, the deputy director of an institution affiliated to the Ministry of Commerce, suggested that China should take strong “countermeasures, especially economic sanctions” against Japan. In another article, titled “Options and rules of economic sanctions against Japan,” a researcher discussed the possible types of economic sanctions that could be imposed against Japan.

Following the Scarborough Shoal standoff with the Philippines, China reportedly blocked numerous banana consignments from entering China. Since the Philippines exports a significant part of its produce to China, it proved a heavy blow to the island state’s economy. On occasions when China’s relations with the Philippines or South Korea have been unpleasant, reports of mainland Chinese travel agencies being discouraged to send tourists to the two states have also been noted.

Recently, news about China’s “transport obstruction” in Mongolia has come up. China is allegedly penalizing Mongolia for hosting the Dalai Lama by increasing tariffs on Mongolian trucks that pass through Chinese territory. Mongolia is believed to have made a request for India’s clear support.

As the Indian and Chinese economies grow and become more connected with the world, economic coercive measures will feature prominently in New Delhi and Beijing’s policy toolkits—much like those of Western powers.

India is generally believed to consider economic coercion to be a tool that does “not serve any purpose,” while China’s resistance to economic sanctions is said to be “legendary.” Incidentally, given India and China’s increasing economic might and growing external linkages, gaining their support for sanctions regimes has often become imperative for sustaining them. Like Chinese policies, India’s strategies for using economic measures for political purposes are opaque—providing them the ease of placing or axing such policies without much justification and media attention. Notwithstanding the upside of such a position, the two emerging powers will not be able to garner the deterrent effect that the great powers in the West enjoy by disclosing their option to implement such measures.

But New Delhi and Beijing must exercise caution, given that the West’s use of economic statecraft is undeniably less than ideal. Its effectiveness has been debated, has its humanitarian costs. Moreover, it cannot be overlooked that Western economic coercive measures have been imposed on both India and China in the past. As states that have dealt with economic coercive measures themselves, India and China should ensure that their use of economic diplomacy is sensible—minimizing collateral damage and civilian inconvenience.

Rishika Chauhan is a Visiting Scholar at the Centre for India Studies in China West Normal University.