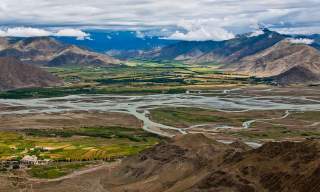 China’s September 30 announcement that it would temporarily divert the Xiabuqu—a domestic river that feeds into the mighty Brahmaputra running from Tibet through Northeast India and Bangladesh into the Bay of Bengal—to allow for the construction of two hydroelectric dams exacerbates anxieties in both downstream Delhi and Dhaka. However, the latest round of recriminations and uncertainties also offer an opportunity to move beyond existing piecemeal and bilateral arrangements, and on to multilateral and confidence-assuring commitments to share information and ultimately even water. In a recent CNA report, “Water Resource Competition in the Brahmaputra River Basin: China, India and Bangladesh,” we argued for just such steps.

China’s plans for dams on Tibetan rivers are key to national economic and energy-development priorities. Chinese media focused almost exclusively on the domestic benefits of the Xiabuqu project. The state-run Communist Youth Daily, for instance, boasted that the project would improve irrigation and thus allow for an increase in grain production in an area known as Tibet’s “breadbasket,” improve flood control and raise electricity production, all of which would help raise the standard of living in Tibet—one of China’s most impoverished regions. These arguments are consistent both with Beijing’s long-running “Develop the West” strategy of promoting greater economic development of and migration into China’s western areas, and with its more recent emphasis on developing clean sources of energy. Some independent analysts, however, contend that the project will have an adverse effect on Tibet’s indigenous population by accelerating desertification and increasing water shortages.

China’s press placed less emphasis on the international ramifications of the diversion. The popular but non-authoritative Global Times rebutted Indian speculation that the announcement could be a way to pressure India in its own ongoing dispute with Pakistan, a close strategic partner of China. India’s Prime Minister Narendra Modi has recently discussed scrapping the Indus Waters Treaty, a decades-old water-sharing accord with Pakistan. Nevertheless, the Global Times noted that the Xiabuqu project began in 2014, before the latest India-Pakistan row. Indeed, Chinese media noted back in December 2015 that the tributary would be diverted this year as part of the dam project, suggesting that the announcement was not intended as a diplomatic bargaining chip. More broadly, as has been the case in the past, Chinese press accused Indian media of “hyping” the issue and misgauging China’s intentions.

Initially silent on the announcement, the Chinese government went into reassurance mode more than a week after the announcement. In written comments to an Indian wire service, China’s foreign ministry asserted that the diversion would cause only an insignificant (0.02 percent) impact on the flow of the Brahmaputra into India. Consistent with its previous comments on Brahmaputra issues, the foreign ministry also noted that Beijing and New Delhi had expanded cooperation in recent years, symbolized by an agreement in which China shares hydrological data with India during the flood season. The foreign ministry also reaffirmed that the quality of the water flowing into India was good and “basically” in its natural state.

China’s plans for the Xiabuqu have raised alarms among Indian commentators, though the government response has been measured. India’s worries to date have focused on flooding in its territory from China’s water-management and dam-building practices, and to some extent the prospect of China diverting the Brahmaputra. A decade of Sino-Indian negotiations have led to agreements for China to provide hydrological data, and India officially has accepted that China’s dams do not pose a danger to downstream water flows. India’s response to the latest Chinese announcement created a nexus between hydrological and geopolitical worries, however. China’s announcement came in the wake of India’s own suggestions about rethinking its commitments to the Indus Waters Treaty with Pakistan, in response to cross-border militant raids from Pakistan, intensifying India’s anxieties about Sino-Pakistani collusion. And the fact that the Brahmaputra runs through a region of India that is the site of recurring alleged cross-border incursions and sovereignty violations, and that it traverses the main venue of a sharp, short, but losing war with China that took place fifty-four years ago this month, further inflames Indian interpretations of Chinese intent. India is also sensitive to its control and development of the restive northeast region through which the Brahmaputra runs.

A leading Indian specialist has warned that “China intends to do a lot more to re-engineer flows in the Brahmaputra system by riding roughshod over the interests of the lower riparians, India and Bangladesh.” Others have called for India to make common cause with South and Southeast Asian governments to dissuade China from completing dam projects in Tibet. India’s government has so far been measured, emphasizing that China provides data during the flood season the Brahmaputra and Sutlej rivers, and that this “arrangement has been useful in preventing damage during the flood season especially during landslides which create temporary dams” and promised to “take up this issue in the next [scheduled] meeting.” In fact, India’s political concerns about China’s temporary blockade on the Xiabuqu may outweigh its specific hydrological concerns.

Bangladesh so far has been near silent on recent developments, but its stakes are huge, because the Brahmaputra is Bangladesh’s largest water system. As the downstream riparian, Bangladesh will feel the cumulative effects of both China and India’s water management practices especially dams and diversion—e.g., through India’s proposed river-linking project. In general, Dhaka walks a tightrope with regard to managing its relations with New Delhi and Beijing. Most recently, Bangladesh seeks to conclude a water-sharing agreement with India over the highly politicized issue of their transboundary Teesta River, while Xi Jinping just made a historic visit to Bangladesh and inked deals for development projects estimated to be in the billions of dollars.

A Case of Crisis Creating Opportunity?

The tensions surrounding China’s diversion of the Xiabuqu underscores the more fundamental problem—that China, India, and Bangladesh lack a multilateral vehicle for managing differences and promoting cooperation on river issues. This contrasts with many of the world’s other major river systems, such as the Mekong and the Nile, which have instituted cooperation at a basin-wide level. The concern is that in the absence of such a mechanism for the Brahmaputra, water security challenges such as drought and pollution could amplify political tensions between the three states and eventually perhaps even result in armed conflict, or what some have called “water wars.” This concern will only increase as these countries’ populations grow and factors such as climate change and development put added stress on scarce water resources.

However, addressing the latest dispute, China’s foreign ministry reiterated that cooperation should remain at the bilateral level, in particular through the China-India Expert-Level Mechanism set up in 2006. India echoed China’s focus on the bilateral approach. But it is deficient because it discusses only hydrological data sharing and emergency management, and excludes Bangladesh. During a recent trip to Bangladesh, Xi Jinping himself observed that Chinese and Bangladeshis “drink water from the same river.” And Prime Minister Modi, during his June 2015 visit to Dhaka, said, “Our rivers should nurture our relationship, not become a source of discord.”

Some space in both China and India may be emerging to pursue multilateral cooperation more actively. A recent article in the journal of the India’s semiofficial Institute for Defense Studies and Analyses suggests creating a formal framework for a water-sharing mechanism with China. And a recent editorial in the Global Times—usually known for its more nationalistic bent—pointed to multilateral cooperation in the Mekong basin as an example of cooperation that could be emulated in the Brahmaputra basin. The author concluded that “this will be the most effective solution to the water dispute between China and India.” From China’s perspective, added benefits of such an initiative would include bolstering Beijing’s credentials as a responsible rising power and reducing tensions on its western periphery, at a time when it is facing increasing challenges on its eastern periphery, such as over Taiwan and in the South China Sea.

India may be the more reluctant riparian multilateralist regarding the Brahmaputra. Its middle-riparian position means it sees upstream China as the source of problems, but wishes to pursue its own dam-building and water-management practices without constraints from downstream Bangladesh. Still, India’s gains from predictability and commitment by its northern neighbor could be matched by the political gains of reassuring its southeastern neighbor—with which relations have been improving over the past few years. Finally, Bangladesh may be the critical player to achieve a multilateral solution. As the lowest riparian and most impacted country, it has the moral authority to implore its upstream neighbors—both rising powers on the world stage, concerned about their reputations—to engage in more responsible behavior in the basin.

CNA’s report lists various options for laying the foundation for multilateral cooperation at official and unofficial levels, including regular technical exchanges between scientists, that could someday evolve into a “Brahmaputra Basin Commission.” To be sure, a multilateral calculation is messier than a bilateral one—but the latest Brahmaputra contretemps could afford an opportunity for increased, useful cooperation.