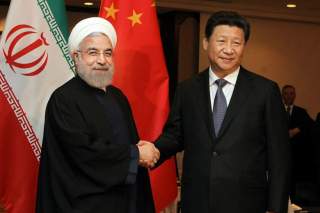 The Iranian nuclear agreement has been welcomed by a number of world leaders as a new chapter in foreign relations with Tehran, largely because sanctions removal will open up new trade and investment opportunities within Iran. While the majority of the P5 + 1 aimed to isolate Iran from the global economy for the last decade, China capitalized on Iran’s estrangement to secure primary positions in both the oil and non-oil sectors of Iran’s economy. Beijing is now placed first in line for Iranian business. More importantly, in the coming years, Tehran could deepen its long-standing relationship with the People’s Republic in the military, cyber, and strategic domains.

Beijing will benefit the most from the removal of sanctions. Since China became a net oil importer in 1993, Beijing has turned to Tehran to help satisfy its growing energy needs. Before UN sanctions were imposed, the Islamic Republic was China’s third largest crude oil supplier. In 2011, the People’s Republic imported a record 550,000 barrels per day from Iran. China reluctantly instituted sanctions on Iran, but oil importation continued even when sanctions were in place. In December 2013, reports even stated that the U.S.-sanctioned Zhuhai Zhenrong Corporation was negotiating a new natural gas condensate contract with the National Iranian Oil Company. According to The Wall Street Journal, Beijing’s oil imports from Iran have increased by 30 percent over the last five years and now account for 9 percent of its overall imports.

Across the region, sanctions relief will allow Chinese companies to score even larger windfalls in oil sector trade and investment. Pakistan is already hoping it will spur China to provide up to $2 billion for the completion of the Iran-Pakistan liquefied natural gas pipeline, a project started in 2010 but suspended in 2013 due to sanctions. This project would buttress the China-Pakistan Economic Corridor (CPEC), a set of highways, railroads and pipelines linking western China with the Pakistani port of Gwadar along the Arabian Sea, cutting Chinese shipping costs and fostering trade.

In return for oil, Beijing has flooded Iranian markets with cheap consumer goods and established relationships in non-oil sectors like construction, manufacturing and transportation. Last year, China raised its quota for infrastructure investment in Iran by over 50 percent. The sanctions regime imposed restrictions on giving the Iranians hard currency, but this actually benefited Beijing by expanding its market share in Iran to the detriment of local businesses. Chinese companies now occupy an optimal position for gaining non-oil concessions and investments after sanctions are removed, leaving other companies and investors a step behind.

Tehran is sure to widen its partnership with Beijing after the deal. During negotiations, continued Chinese trade and investment helped Iran evade the worst of the sanctions regime. However, fear of being seen as Iran’s enabler and imperiling investment links with the United States hindered China from helping Iran more. With sanctions removed, China will have a freer hand to deepen its relations with Iran not only on economic issues, but also in the cyber and military domains.

Chinese-Iranian cyber collusion is not new. In 2012, Reuters reported that the China-based telecommunications company ZTE Corporation signed a $130.6 million networking equipment contract in 2010 with the Telecommunication Company of Iran, which controls most of Iran’s landline services, to help Iran monitor Internet, text, and voice communications. ZTE Corp.’s Chairman stated that a U.S. criminal investigation into the claim forced the company to scale back its business in Iran but accused ZTE’s rival, Huawei Technologies Co Ltd., of continued dealings in Iran. Tehran has long relied on Beijing for technology and know-how, and recently called for joint cooperation in research and investment, ICT, airspace, and telecommunication. Iran will likely accelerate coordination with China in the coming years, to both improve its domestic cyber-surveillance and wage destructive cyber-warfare on international companies.

Iran may look to China for military support, although the nuclear agreement’s restrictions on arms and missiles sales may postpone this collaboration. Iranian-Chinese military cooperation stretches back to the 1980s, when China provided Iran with arms, tactical ballistic missiles, and anti-ship cruise missiles in its fight against Iraq. China has since facilitated Iran’s military modernization, even being suspected of transferring technology and equipment to Iran via North Korea. China repeatedly insisted during negotiations at Vienna on lifting the UN arms embargo, and although the JCPOA maintains the UN arms and missiles embargoes for five and eight years, respectively, Russian Foreign Minister Sergey Lavrov has suggested that both Russia and China will continue making weapons deals with Iran according to UN Security Council procedures. Beijing has been traditionally confined to a commercial role in the Middle East, but military support of the Islamic Republic could provide a foothold for greater regional influence, especially in the Gulf.

Iran and China share similar though not identical interests. Both have a common strategic interest in forming a counterweight to American hegemony in the region. Ayatollah Khomeini has stated that the nuclear deal does not change Iranian relations with the West on “different global and regional issues.” China wants to prevent Washington from “pivoting” to the Asia Pacific. However, China has an interest in keeping some distance from Iran. Despite sanctions relief, China does not want to endanger growing trade and investment with the United States and Europe by appearing complicit in Iran’s more destabilizing regional ventures. Still, China is wealthy, powerful, and willfully ignorant of Iran’s domestic human rights abuses and regional ploys for influence, making Beijing an ideal partner for Tehran.

The nuclear agreement, while it will certainly halt Iran’s pursuit of a nuclear weapon for a decade or so, will not fundamentally change Iran’s broader geostrategic objectives. China’s regional and international ambitions will not change either, despite Beijing’s rare display of goodwill and cooperation in the nuclear negotiations. China played an important role in the P5+1, but largely because Beijing knew it could leverage the ongoing talks to solidify its ties with Tehran and bolster its long-term position in the region after the deal.

Courtney Bliler is a Research Assistant in the Middle East Program at the Center for the National Interest.