China Isn’t Everything: America Must Retake the Moral High Ground 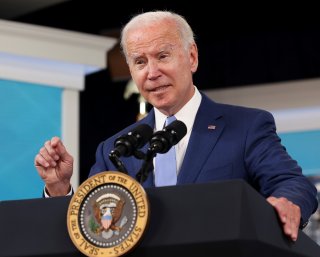 Judged on his eight months in office, President Joe Biden’s foreign policy initiatives may look incoherent and, in some cases, enacted clumsily. But a closer analysis discloses that behind the various steps lies a coherent and finely tuned foreign policy designed to defend the interests of the United States.

All the eggs have been put in one basket: The only strategic objective is to prevent China from emerging as a competitor for global leadership. This might make sense from an American point of view—China has notably been one of the few issues commanding bipartisan support. It is less obvious that it is in the interest of the rest of the world, and it might be added, America’s long-term interest.

It is perilous to map out a strategy without scrutinizing the opponent’s response. An opponent cannot be counted on to follow a script, and their reactions might compromise an apparently impregnable plan. The United States must anticipate not only how potential adversaries and enemies will reciprocate, but also rally allies around a policy forged in the American workshop. Due to the complexity of global politics and dwindling American power, allies have become indispensable to amplifying its soft and hard power. The snag is that to do so Washington needs to involve them in decision-making; something the Biden administration seems unwilling to do.

The tactic appears to offer China participation in institutionalized economic globalization on terms dictated by the United States. Forcing China to choose between isolation from the global economy or acquiescing with rules written by the United States obviously favoring the author is, however, a non-starter. Any large nation-state will reject such “an offer you cannot refuse.” Chinese rejection may be what the United States hopes for and expects. Then, Washington might appeal to the rest of the world saying that China is unreasonable and does not accept playing by the rules, stigmatizing it and then seeking support for squeezing China out of institutionalized economic globalization.

That will surely result in Chinese retaliations forcing the United States to double down resulting in a downward spiral pulling global trade and investments down. Who will benefit from that? Is that what the world expects from a global superpower trusted and expected to be benevolent? Is that the United States many of us looked up to?

A genuine global superpower must capture the zeitgeist, stick out as a nation indisputably delivering high living standards to its citizens and willing to forego selfish interest if necessary to shape compromises in international negotiations. It is not about raw power, nor is it to be seen as the indispensable nation as Madeleine Albright put it—it is about being recognized as the nation occupying the moral high ground.

Biden’s strategy is marketed under the label of democracies versus authoritarian nations. This is a commendable objective, but a good deal of people around the globe question the right of the United States to anoint itself as the unblemished democracy. The moment is infelicitous after President Donald Trump’s ostensible attempt to countermand the result of the presidential election and the storm on Capitol to execute the vice president and the speaker of the House. Add to this a Supreme Court dominated by George W. Bush- and Trump-appointed nominees, who are reversing “liberal” legislation, thus casting itself in the role of a political body in contradiction with the separation of powers laid down by the constitution.

It also makes light of the proof that the pudding is in the eating. Many people around the globe ask the simple question whether American democracy has been able to deliver solutions. In the eyes of many people, America’s political system is identified with mismanagement of Covid-19, financial crises, high poverty rate, inequality, and concentration of power and wealth in comparatively few hands. If that is not enough, recent evidence by a former employee at Facebook that algorithms deliberately are calibrated to instill hatred and anger cast a shadow over the gold standard of democracy: freedom of expression.

The decisive question is not about the United States taking on China. It is about the United States regaining the moral high ground. America as many people knew it from the presidencies of Harry Truman, Dwight  Eisenhower, and John F. Kennedy—a beacon for freedom and democracy; a genuine market economy, a nation characterized by bipartisanship and respect for the Constitution, and a country whose Congress worked with the president to hammer out solutions rallying support from a majority of Americans—can yet return. Please!