China and Its Neighbors: A Delicate Balance 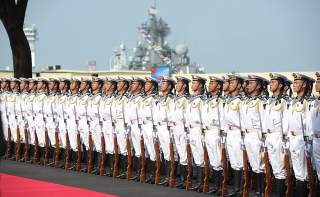 No one country in today’s world has as many neighbors as China does. China’s vast territory is bounded by fourteen overland countries and six maritime ones, rendering it extremely difficult to be a good neighbor to all. Already the world’s second-largest economy, behind only the United States, China feels more of an urge now to secure a favorable peripheral environment for its further rise and expansion, toward the ambitious goal of revitalizing its ancient civilization and realizing “the Chinese Dream.” Recent years have seen China implement one strategy after another, the best known being the “One Belt, One Road” strategy and the AIIB (Asian Infrastructure Investment Bank), both aimed at tapping new markets for its growing economy and extending its influence wherever it can reach. China knows that its global ambitions have to begin with its neighbors, and that differentiated approaches to different neighbors make the most sense in creating an overall favorable neighborhood environment.

To the east, China overlooks North Korea, South Korea and Japan, each a hard nut to crack.

The DPRK, once China’s closest ally, is quickly becoming a “negative asset” for China, with bilateral relations dropping to a historic low, due largely to North Korea’s nuclear program. China seems to be at a loss in the face of the gambits of North Korea’s young leader Kim Jong-un, who ordered a series of nuclear tests in defiance of harsh international sanctions and China’s strong opposition. Domestically, Kim has cruelly purged several high-ranking pro-Chinese officials; new faces in the top brass are believed to be less China-friendly. To date, Chinese president Xi Jinping has not met with his North Korean counterpart. Therefore, it’s quite safe to say that as long as King Jong-un refuses to abandon his nuclear program and continues to diminish China’s role in the “Six-Party Talks,” China is not likely to rally North Korea to its side in joint defense against America and Japan on its eastern front.

For well over a century since the first Sino-Japanese War in 1895, China-Japan relations have seen structural contradictions. The second Sino-Japanese War, which broke out in 1937, was another attempt by Japan to dominate East Asia by means of force. While the first war taught China a lesson, the second ended in Japan’s defeat, leading to Japan’s dependence on the United States as a goalkeeper in the Asia-Pacific against China, Russia and North Korea. Later on, the handover of jurisdiction over the Diaoyu Islands (known in Japan as the Senkaku) by America to Japan in 1972 exacerbated structural contradictions between the two neighbors, as showcased by the long-standing territorial disputes in the East China Sea. However, China chooses to refrain from escalating tensions, trying to minimize hostility to Japan at this crucial moment of its development.

In contrast to China’s relations with Japan and North Korea in Northeast Asia, China–South Korea relations have registered steady development, particularly in trade and economic terms. The exchange of visits by top leaders in recent years facilitated the signing of the China-Korea Free Trade Agreement, which went into effect on December 20, 2015, broadening and deepening the China-ROK Strategic Cooperative Partnership. However, the United States’ proposed deployment of the THAAD system in South Korea has cast considerable shadow over the bilateral relationship.

Taiwan is internationally recognized as part of China, but the United States’ continuous intervention in cross-Strait relations has made the Taiwan issue highly internationalized. During the eight years of the Nationalist Party’s rule (also known as the KMT), cross-Strait relations recorded substantial détente, reaching a zenith at the summit meeting between then ruling KMT chairman Ma Ying-jeou and Xi Jinping in February 2016. As such, China quickened its pace toward peaceful reunification, but the trend was reversed by the election last May of the pro-independence Democratic Progressive Party (DPP) led by Tsai Ing-wen, who is now Taiwan’s leader. With the ruling DPP moving faster toward de facto independence, China is now preparing for a final solution by non-peaceful means, which is the last resort China would prefer to turn to.

In a nutshell, China seems to be on the defensive against its eastern neighbors in its overall foreign-policy configuration.

To the north, China shares boundaries with two neighbors: giant Russia and neutral Mongolia. As early as in 1996, China and Russia signed a strategic partnership agreement, the first of its kind China ever struck with a foreign country after China’s own “glasnost” and “perestroika” in 1979.The strategic partnership served as a guide not only to trade, economic and military cooperation in their bilateral relationships, but also to their joint actions at the UN Security Council. Later on, in 2011, both countries decided to elevate the partnership, prefixing it with the word “comprehensive,” the highest-level partnership China could ever offer to a foreign government by then. Today, reinforced by the Shanghai Cooperation Organization and the BRICS, China and Russia, as two big world powers, would assist each other in world affairs against America and its Western allies.

Mongolia used to be part of China, and after it gained independence from China in 1947, it remained a long-time ally to the former Soviet Union. With the end of the Cold War, it normalized its relations with China and ever since then, it has managed to strike a balance in between China and Russia, seeking to be recognized as a permanently neutral state. Needless to say, a neutral Mongolia is in China’s best interest. Today, Mongolia is becoming more dependent on China for free riding on the fast track of China’s economic growth, and is embracing the proposed China-Mongolia-Russia Economic Corridor.

In short, China’s strategy regarding its relations with the two northern neighbors has been aimed at continuous consolidation.

China’s long western border is adjacent to four Central Asian countries and another four South Asian countries. Kazakhstan, Kyrgyzstan and Tajikistan are members of the China-dominated Shanghai Cooperation Organization, with Afghanistan currently having observer status in the organization. Originally, China initiated and created the SCO with an aim to fight against extremism, separatism and terrorism in the vast areas of Central Asia and in China’s far-flung region of Xinjiang, where the East Turkestan Islamic Movement, which seeks independence from China, poses a serious threat to China’s social stability and territorial integrity. Apart from security concerns, China also takes advantage of the SCO to deepen and widen its economic ties with Central Asian countries, focusing on oil and gas, which China needs to fuel its economic engine. In terms of the reconstruction in Afghanistan, China keeps telling the rest of the world that it also has a stake in the effort.

China’s relations with its South Asian neighbors are much more complicated. Pakistan is a godsend to China, enjoying the All-Weather Strategic Partnership, the highest-level partnership China has ever established with a foreign government thus far. In contrast, India’s strategic partnership with China is far from all-weather, haunted by long-standing mistrust and suspicion stemming from its territorial disputes with China and its policy toward Tibet and the Dalai Lama’s exile government. Besides, India is now a strong competitor against China in the international arena, ruling out the likelihood of the two countries becoming too close. Nepal is traditionally India’s sphere of influence, but because of India’s ferocious appetite for controlling Nepal, the Himalayan kingdom seems to be swinging to China.

To sum up, China’s strategy toward its Central Asian and South Asian neighbors has been one that seeks to maintain the status quo.

To the south, China has seven neighbors—namely Myanmar, Laos and Vietnam overland, and the Philippines, Indonesia, Malaysia and Brunei across the South China Sea.

For decades, China had long been boastful of its special relations with the junta-ruled Myanmar, but the paukphaw (“brotherhood”) began to erode with the advent of Myanmar’s democratization process in recent years, as when several of China’s massive projects in Myanmar were suspended by Myanmar’s democratically elected government. Now, with the leader of the ruling National League for Democracy Aung San Suu Kyi sitting above the president, Myanmar maneuvers between China and America, creating uncertainties in the future development of China-Myanmar relations. Laos, a socialist country and impoverished as it is, relies on China for much of what it needs to get by. Currently, as the landlocked Laos is improving its connection with China under China’s Belt and Road Initiative, the Laotian government is more willing to speak out on China’s behalf within ASEAN. Vietnam, once China’s comrade and brother, continues to be China’s comrade ideologically, but no longer looks like much of a brother in practice, as a result of the 1979 border war and long-standing disputes over the Paracel Islands. President Obama’s historic visit to Hanoi in May 2016 eventually led to the lifting of arms embargoes on Vietnam, galvanizing more leverage in Vietnam’s advantage over China.

China claims 80 percent of the South China Sea, which is contested by its four maritime neighbors. For decades, Indonesia, Malaysia, Brunei and the Philippines had been easygoing with China’s principle of “lay aside disputes for joint development,” while making inroads into the troubled waters and contested islands. However, against the backdrop of President Obama’s “pivot to Asia” and China’s reclamation of a few sensitive shoals and reefs in the South China sea in recent years, the four maritime neighbors began to openly challenge China’s territorial claims, with the Philippines going so far as to have brought the case to the Permanent Court of Arbitration in The Hague against China. The court eventually ruled completely in the Philippines’ favor, encouraging and emboldening the other claimant nations to assemble more closely together behind the Philippines. But surprisingly, the new Philippine president, Rodrigo Duterte, instead of taking advantage of the leverage his predecessor passed on to him, chose to visit China to seek favorable terms in a compromise. Duterte even announced to his Chinese counterpart that he would separate from America militarily and economically. Ironically, the South China Sea seems to be more tranquil than it was before the arbitration.