China and Japan's Great Clash over the Senkakus 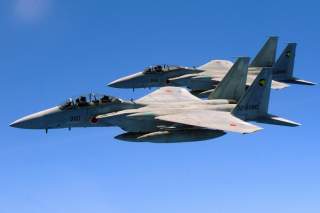 Within the pages of the National Interest, I have had the privilege of being part of a recent discussion about the Senkaku/Diaoyu islands in the East China Sea with Robert Manning and Ryan Scoville, two very accomplished and fair-minded scholars.  After my earlier article, “A Six-Point Plan to Solve the Senkaku Island Dispute,” published on December 29 and summarizing an earlier essay that Akikazu Hashimoto, Wu Xinbo and I had penned, Robert Manning rebutted our argument in a post earlier this month. Ryan Scoville then wrote an article partly in response to my earlier piece.

I would like to respond briefly to the central argument of both Manning and Scoville.  I disagree fundamentally with neither.  But I stand by my guns, and our earlier argument, that a balanced proposal for trying to solve the island dispute can be a constructive force in the current Japan-China relationship.

In brief, Manning argues that history, national pride, and honor of the type that Thucydides wrote about millennia ago in regard to Athens and Sparta would prevent Tokyo and Beijing from responding favorably to any rationalist plan that treated the island issue as a simple, straightforward disagreement over relatively small and unimportant land formations.  Manning claimed that the difficulties in the complex Japanese-Chinese relationship, with all of its baggage and tensions today, would trump any analytical attempt to cleverly bridge the divide between these two countries through a form of arbitration.  His advice was to manage the problem and try to cool it down rather than to go for a Hail Mary attempt at solving it.

Scoville took a different tack.  Recognizing that Hashimoto, Wu, and I had sought a compromise plan that was in effect equitable to both sides, he dismissed the premise behind this approach, arguing that in fact Japan simply has a stronger claim to the islands.  International law and norms would tend to grant it a strong claim over land that it has in fact been controlling for many decades—at most times, without active Chinese dissent or challenge.  De facto, Japan has been ruling the islands, so de jure, by the way these matters tend to be settled through human history, its claims are strongest.  As such, an attempt at a fair outcome treating the two parties equally proceeds from a faulty premise, and should be abandoned.  Scoville also argued that these islands had been used extensively enough in the past, including by temporary human settlements, that they should in fact be associated with exclusive economic zones around them—another disagreement with our suggested approach.

In summary, the original proposal that I set forth with Professor Hashimoto and Professor Wu included the following aspects:

1) No new territorial disputes beyond this one would be raised by either party in the future;

2) Ongoing, separate disputes between China and Japan over exclusive economic zones would be unaffected by the Senkaku/Diaoyu islands; they would be decoupled from EEZ determinations;

3) Each side would acknowledge the sovereignty claims over all the islands by the other;

4) Japan would, however, retain formal administrative rights under international law;

5) Japan would agree to delegate the administration of the islands to a joint oversight board with equal memberships on the Chinese and Japanese sides, rotating chairmanship, and consensus decision-making rules;

6) Patrols for purposes of safety, and tours of the islands for reasons of tourism or ecology or history, would be organized and conducted together by China and Japan and regulated by the board;

In regard to Manning’s argument, my response is simple—he could well be right.  The National Interest gave our initial essay a pithy title, conveying a high degree of confidence that our plan would work.  In fact, we were not predicting any easy win.  Our intent, rather, was to try to make the debate over these islands more concrete and solution-oriented than it has generally been in the past.

In broader terms, however, Manning is too deterministic.  The fact that Japan and China are not getting along well right now should not be interpreted to mean that it cannot improve in the future.  Clearly, France and Germany had every bit as troubled a past as Japan and China yet get along very well now.  This is true for many other interstate relationships in Europe as well.  It is also true to a considerable degree for the U.S.-Mexico relationship; indeed, it is true for Japan and the United States today as well.

To be sure, it will take time to repair the current breach between Japan and China, and perhaps our proposal is a bridge too far at present.  But the same fragility in the relationship between Tokyo and Beijing that could make a near-term settlement difficult also makes it dangerous to let the problem go unaddressed.  It could again produce sparks that lead to a serious crisis.

Moreover, thinking in terms that Thucydides might advise, Japan should in fact want to lock China into a more cooperative relationship going forward.  If being willing to compromise on the Senkaku/Diaoyu gave China some sense of historical satisfaction, and if the very terms of the accord required China to renounce any further territorial ambitions at Japan’s potential expense, the price to be paid for sharing these small islands would be quite modest.  To be sure, if a Japanese concession whetted China’s appetite for more assertiveness, the effect could be counterproductive—which is why it is essential that point 1 in our 6-point plan be included in any agreement.  China would in fact be committing itself to stabilizing future behavior under this approach, and that is a crucial part of the whole idea.  This accord, viewed in such terms, could therefore be viewed not just as win-win diplomacy but as the creation of a canary in the mine.  China would be making a promise about its own future behavior that the world could then use to gauge the character of its future foreign policy, and to hold it accountable, and to respond accordingly if China went back on its word.

Mr. Scoville’s arguments are serious as well.  But there is a clear rebuttal to each.  First, the fact that Japan in effect has “squatter’s rights” in the Senkaku/Diaoyu islands is true—but it is also exactly part of the problem.  China sees this as unfair.  It suffered hundreds of years of relative withdrawal, decline, and isolation, including most notably the “century of humiliation” beginning around 1839 with the arrival of Europeans and their Opium wars—all capped off by the Japanese invasion of the 1930s.  Anything that happened throughout this period was during a historical period of great Chinese vulnerability.  The world was exploiting the Middle Kingdom in this period and China’s actions were about survival (and its preoccupation during part of the time was with internal revolution, of course); it could not be expected to have conducted normal diplomacy over each and every issue with normal focus and effectiveness.  It operated under duress and its tacit acceptance of Japan’s control of those islands over this period therefore was not tantamount to an acknowledgement that Japan was in the right to act in this way.

Here I am distilling the Chinese argument as I understand it—not necessarily agreeing with the argument.  But the point is that China strongly believes its own version and rejects the basic logic of Scoville’s (or Japan’s) approach to the Senkaku/Diaoyu issue today.  China’s behavior is assertive, even aggressive, but it is not purely cynical; as best I can tell, Chinese really believe they have a fair claim to the islands.  Therefore, to entertain the possibility of doing a deal with China on the matter is not equivalent to appeasing Hitler in the 1930s.  It is a reasonable way to attempt to settle a genuine dispute between two sovereign states, provided that the terms are fair and verifiable and that China is expected to honor certain commitments itself, rather than simply pocket concessions.

As for the argument about exclusive economic zones around the islands, Scoville is reasonable to argue that whoever owns the island should have the usual rights to neighboring seas and seabeds (with twelve-mile territorial waters and two-hundred-mile economic zones).  But so what?  China and Japan can simply agree in this case that, since there is ambiguity in how the Law of the Sea treats the islands in question, and since there is a dispute over sovereignty as well, the normal Law of the Sea provisions will by mutual consent of the two parties in question simply not be applied in this case.  They can, as two sovereign nations trying to reach a deal over islands and surrounding waters, work out their own rules provided that the interests of no other party are prejudiced in the process.  It would be bizarre in the extreme to say that an international treaty that does not even enjoy full standing among the important members of the international community (like the United States) should force the world’s second and third largest economies to have a dispute over a matter that they could otherwise diplomatically resolve.