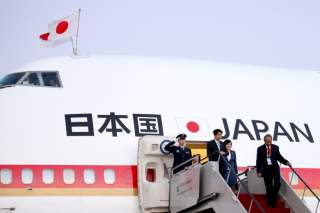 In contrast, in the fairness dilemma, each side is driven to take actions they see as self-evidently right and just, even at potentially high cost to themselves—but which the other side considers unfair, aggressive or risk taking. One does not necessarily have to be afraid or uncertain of the other’s motivations and capabilities; the rejection of unfairness or pursuit of justice can drive one to act.

Dangers arise from the fairness dilemma in the medium term. It erodes other hitherto healthy aspects of Japanese-Chinese relations, such as in trade and investment. Japanese direct investment in China, for example, almost halved in 2014 compared to the year before. Lack of mutual comprehension from the fairness dilemma muddies interpretations of the other’s actions, so breeding mistrust. It magnifies the potential impact of random accidents or incidents, for instance, with fishing boats or tourists.

Further, the fairness dilemma contributes to seemingly contradictory balance-of-power perceptions. Tokyo has Washington’s pledged support if Japanese ships are attacked or the Senkaku/Diaoyu islands are seized, but Japan has primary responsibility for this kind of crisis and Washington remains officially neutral on sovereignty. Over the fairness dilemma, Japan feels more alone and vulnerable. However, in the security dilemma, the United States is central, so China feels more vulnerable. So each side has an aspect of the relationship where it feels itself an insecure underdog seeking an advantage.

In a crisis, the fairness dilemma provides a constantly ready store of dry tinder, limits the political space within which Japan and China can act and thus provides a distinct path of escalation.

What to Do: “1 Step Back, 3 Steps Forward” to Overcome the Fairness Dilemma

Between Japan and China, particularly over territorial disputes, it is necessary to address both the fairness dilemma and the security dilemma. Remedying one alone is insufficient.

For the security dilemma, decades of thinking have identified generally accepted recommendations. Consider recent classic and sensible recommendations by Steinberg and O’Hanlon on a U.S.-China security dilemma. They propose focusing on projecting resolve and enhancing transparency to reduce uncertainty; confidence building and reciprocating positive actions; and restraining defensive actions that might appear threatening. Such measures would mitigate the fear and uncertainty driving the security dilemma in Japanese-Chinese relations, but not the pursuit of fairness driving the fairness dilemma. While Japan and China have primary responsibility, the United States can and should contribute. Four policy recommendations could together enable a breakthrough, in a strategy we call “one step back, three steps forward.”

First, looking back, all sides could learn from examples of overcoming the fairness dilemma—not just the lesson of German apologies so often prescribed for Japan, but also lessons to all sides from Northern Ireland and the past Chinese-Japanese relationship itself. Apologies’ importance must not be minimized, but apologies can only ever be half the story. Apologies only mean something if accompanied by a process of self-reflection that internalizes historical lessons—and this is crucial for both sides in the fairness dilemma. Looking back should not be confused with dwelling on the past or demanding atonement, which inevitably lead to high human and economic costs by postponing true reconciliation. Leaders should constantly remind people of these opportunity costs.

In Northern Ireland, peace was a process where the parties prioritized their future, despite bitter injustices perceived by all sides. Success required leadership and concessions on both sides. Martin McGuinness was the likely IRA chief of staff when they killed the Queen’s cousin in 1979—now he’s deputy first minister and he recently toasted the Queen at Windsor Castle. Truth-seeking is necessary, but without recrimination and prosecution is often most constructive.

China and Japan themselves showed they can move on. They tried to avoid historical discussions while fostering bilateral relations from the 1970s to the 1990s, with regular summits and expanding trade and cultural interaction. As Chinese leader Deng Xiaoping said in 1978, “let bygones be bygones.” In 1978 in Tokyo, Deng declared, “My heart is full of joy,” and hugged the Japanese prime minister. Japan provided significant development aid to China. And after the 1989 Tiananmen Square crackdown, Japan first sought to ease Beijing’s isolation by resuming assistance loans in 1990, and Prime Minister Kaifu was the first G-7 leader to visit China in 1991. Today, the two countries’ competing historical narratives can no longer be shelved, and leaders on both sides must steer the truth-seeking process away from politics and towards long-term bilateral dialogue.

Addressing the fairness dilemma also requires proactive shaping of future relations among China, Japan and the United States. A first step forward is anticipating factors that may exacerbate the fairness dilemma—and a crucial example is helping Japan and China develop forms of nationalism that will not inflame this dynamic. China must recognize Japan requires a national identity that fosters social cohesion and enables defense of national interests; but not one that airbrushes uncomfortable historical chapters. Similarly, Japan must recognize China requires its own nationalism, but not with an anti-Japanese centerpiece.

So, what types of nationalism? Japanese prime minister Murayama’s 1995 statement apologizing for the war stated: “Japan must eliminate self-righteous nationalism.” As this is of concern in all countries, they could steer towards nationalism that fosters pride, while accepting the same by neighbors.

In a second step forward, Washington can facilitate processes to tackle one source of the fairness dilemma: the differing contemporary governmental ideas of what is fair and just. That is, while Japan stresses pure objective law, instead China incorporates a broader historical context that it thinks leaves certain sovereignty questions open from when it was weak (and which it seeks to address while strong). Government and academic dialogues could help understand each idea, and eventually bring together both. One legalistic strand could focus on maritime law, such as the UN Convention on the Law of the Sea. This could build on work in the West Pacific Naval Symposium between regional naval leaders. Meanwhile, a historical or academic strand would examine sources of perceived injustice and clarify facts. Bringing both strands together would begin to put the differing ideas in the same space, even if disagreement remains, and identify plausible common ground on which to seek compromise over time.

For the third step forward, China and Japan (together with the United States and other interested nations) should begin to develop a rules-based system for the East China Sea that reconciles competing concepts of fairness. This would describe how to resolve certain disagreements over resource extraction, maritime security and the maritime environment, while being coupled with nonviolent measures for rule enforcement. The process of creation is key. It should be developed mutually to avoid perceptions that China must play by others’ rules; and without prejudging the outcome.

An analogy is the decades-long process that eventually formed the World Trade Organization. Despite conflicting views of fairness for trade governance and dispute settlement, the parties negotiated a combination of universal standards with country-specific entrance rules, including acceptable enforcement. An evolving rules-based system will be no panacea, as demonstrated by the slow progress developing the declaration of conduct in the South China Sea signed in 2002 between the Association of Southeast Asian Nations and China. Full reconciliation may never happen, but the actors need a plausible basis for moving forward and a concrete goal.

Ultimately, this could lead to Japan making a major concession to its current position, such that it accepts China’s contention that the underlying facts related to sovereignty of the islands are in dispute. But this would only have value for Japan if accompanied by Chinese inclusion in a credible multilateral framework that restricted further Chinese expansion and shared resources fairly in currently contested areas. This is the objective win-win scenario for both, where each gains materially beyond the current situation and takes a step back from absolutist positions over sovereignty. It bridges the dual need for security and fairness, but requires a process that can lead us there.

If policy makers want to be realistic, they must understand the world as it is. Fairness is important, and this is based in our biology. Because what is fair according to Japanese and Chinese perspectives is currently incompatible, this can lead to tragedy. The security-dilemma concept was innovative and useful, because it described a recurring physical and psychological problem in international relations—making it a tangible problem for which policies could be developed. In the same way, the fairness dilemma captures a problem and so helps make it addressable. Simple solutions don’t exist for either the fairness dilemma, or the security dilemma. Both require leadership and political will to mitigate, and for a long time, leaders may at best hope to limit their effects. Identifying the fairness dilemma can start the critical debate about how to prevent it from leading to tragedy.

Nicholas D. Wright is a neuroscientist and an associate at the Carnegie Endowment for International Peace. James L. Schoff is a senior associate in Carnegie’s Asia Program.