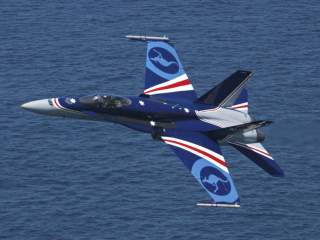 For a middle power, Australia has long defined its national interests in very broad terms. It has sent its troops alongside U.S. forces to Iraq and Afghanistan, and over the years its military has participated in operations as far afield as Rwanda, Somalia and Lebanon. Today, Canberra is part of the coalition carrying out airstrikes against Islamic State in Syria.

Its newly released defense strategy, however, demonstrates just how much Australia’s security focus has turned to its own region. Canberra’s worry about rising Chinese power in the Indo-Pacific has sparked a new willingness to fund the defense muscle necessary to play a major regional role. The result is a new opportunity for the United States to work with Australia in order to strengthen the web of regional partnerships that anchor Asian stability.

The new security framework—a “defense white paper,” in Canberra parlance—describes Australia’s strategic environment and communicates its intentions while presenting a blueprint for enhancing national security. A glance at the white paper makes clear that, while a number of concerns preoccupy Australian defense leaders, including Islamist terrorism and fragile states in the South Pacific, it is Chinese behavior that dominates all others.

The white paper notes the importance of the “rules-based order” more than four dozen times, adopting the American-style coded term for discomfort with Beijing’s increasing tendency to flout long-standing principles. It highlights the rising tensions across the East and South China Seas and expresses concern with Chinese land reclamation that have put much of the region on edge.

But the new approach goes beyond well-crafted expressions of concern—it also commits real resources to the effort to deal with them. Canberra has pledged to boost its defense spending to 2 percent of GDP by 2020, and to provide an additional A$30 billion in funding over the next ten years. The new dollars will be devoted largely to maritime power-projection capabilities, including twelve new submarines (the largest-ever Australian defense acquisition program), twelve major surface ships, three air warfare destroyers, anti-submarine warfare capabilities, and maritime intelligence and reconnaissance assets.

Washington should welcome such investments, together with new steps to enhance Australia’s regional security partnerships. Australian officials have pushed to strengthen defense ties with Singapore, Vietnam and the Philippines, and they have served notice that both their freedom of navigation exercises and routine air patrols in the South China Sea will continue. These moves complement America’s own efforts to deepen its engagement and presence in the Pacific.

None of this is lost on China, whose foreign ministry quickly expressed “concern and dissatisfaction” with the new strategy. The ministry’s spokeswoman added, without evident irony, that Beijing seeks an end to the “constant reinforcement of military buildup in the Asia-Pacific.”

That’s unlikely. Australia is far from alone in its concern at China’s rising assertiveness, nor is it unique in its reaction. Most countries in the Indo-Pacific are building more powerful militaries, with an emphasis on maritime and air assets. At the same time, they are establishing deeper security ties with the United States and with each other. The result is an emerging Asian power web that seeks not to contain China, but to constrain its tendency to flout the “rules-based order” that so preoccupies defense planners today.

These countries seek not only a regional balance of power, but also a balance between their growing economic dependence on China and their desire to maintain an independent foreign policy and security profile. The tensions between the two surfaced recently when a Chinese company took a ninety-nine-year lease for the port of Darwin, where U.S. Marines are deployed on rotation.

Australia’s regional activism is good for American efforts to rebalance its own foreign policy toward Asia. The United States should use the opportunity to do a few things of its own. Washington should pull out of sequestration-era defense budgets to boost spending and increase the share of military assets committed to the region.

U.S. defense officials are currently exploring the stationing of long-range bombers in Australia, which would put these aircraft within distance of the South China Sea. They should also explore new trilateral defense exercises with third countries and the possibility of basing U.S. Navy vessels on the western Australia coast. And Washington should work with Canberra to revive quadrilateral cooperation with Japan and India.

Above all, the United States will need to demonstrate—to allies like Australia and competitors like China—that rather than retrenching and retreating from Asia, America is committed to a robust long-term presence there.

In marshaling its resources toward ensuring a peaceful and stable Indo-Pacific, Australia can demonstrate the sort of regional leadership that strengthens American efforts to underwrite the security so necessary in the world’s most vital region. Washington should not let the chance slip by.