China May Already Be Losing the Trade War 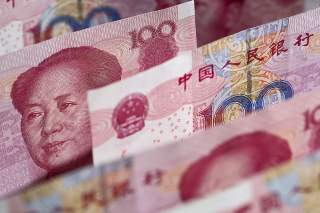 During last year’s U.S. presidential election, then-candidate Donald Trump made a great deal of political hay calling China a “currency manipulator” and suggesting that the United States would rectify the situation when he took office. Now ensconced in the White House, President Trump continues to wave the bloody shirt of unfair trade practices by Beijing, but the fact is that China’s terms of trade with the West have eroded steadily in recent years.

Treasury Secretary Steven Mnuchin has signaled no urgency to designate China a currency manipulator, Bloomberg News reports, saying instead that he wants to use a regular review of foreign-exchange markets to determine if America’s largest trading partner is cheating.

While China did devalue the yuan in the 1990s and 2000s, Beijing modified its currency policy in 2005 and allowed the yuan to appreciate. These days, many analysts believe that China is actively trying to prop up the value of its currency as private capital flees the country.

Back in December, Barron’s Randall Forsyth noted that China has been spending its foreign currency reserves to “brake the depreciation of the yuan—contrary to assertions that it’s trying to drive its currency lower.” Many of President Trump’s supporters view China’s sales of U.S. Treasury bonds—some $1 trillion since 2014—as part of a nefarious plot to drive up interest rates and thereby weaken the United States. But in fact, China remains the largest holder of U.S. Treasury debt and Chinese citizens have been spending the dollars provided by the Bank of China to purchase real estate and other assets in the United States

As this writer noted in a research note for Kroll Bond Rating Agency last December:

***Hopefully at some point the impressive collection of business moguls and financial titans surrounding President-elect Trump will refocus U.S. policy pronouncements on the basic tenants of global economics, especially the concept of “recycling” dollar trade surpluses. Just as capital inflows from China helped to stoke the housing boom of the 2000s, ending with financial disaster in 2008, inflows from China more recently have helped to reflate sagging asset prices and then some, and arguably complemented the Fed’s actions in this regard.***

In many respects, the decision by Communist Party Secretary Xi Jinping to allow Chinese nationals to have access to dollars and to spend them freely offshore may be at least partly responsible for the strong economic situation in the United States, at least in terms of asset prices and real estate. Over the past five years, $1 trillion has flowed out of China, much of it to the United States in the form of direct investment. Indeed, what Trump ought to worry about is the day when “Uncle Xi,” as he is known in China, shuts the currency door and ends the flow of Chinese direct investment coming into the United States. Such a decision would mean that the yuan would weaken and the flow of dollars into the country from Chinese nationals would dry up.

Aside from the accusations of currency manipulation, the larger issue driving the Trump administration’s antagonism towards China is the notion that they and other Asian nations are using their low labor and other costs to unfairly compete with American workers. In The Coming China Wars—a 2006 book President Trump cites as his favorite on China—White House trade czar Peter Navarro portrays the Asian country as a nightmarish realm where “the raw stench of a gut-wrenching, sweat-stained fear” hangs in the air and myopic, venal and incompetent Communist party officials rule the roost. The Harvard-educated hardliner accuses “cheating China” of destroying American factories, communities and lives by flooding the United States with illegally subsidized and “contaminated, defective and cancerous” products.

While Navarro’s view of China’s dismal political situation may be entirely accurate, the country’s terms of trade have deteriorated significantly over the past two decades. This is not simply a function of the appreciation of the yuan, but a more basic change in the cost of doing business in China. Whereas in the 1980s and 1990s, China could be described as an ultra-low-cost producer of many manufactured goods, by the 2000s—when this writer was covering the semiconductor capital equipment sector—China was rapidly losing its comparative advantage to nations such as South Korea, Vietnam and Mexico due to rising wages and steady internal inflation.

Today, China's labor costs are only 4 percent cheaper than those in the United States when productivity is factored in, according to Oxford Economics. Moreover, the additional costs of doing business in China, including payments to senior government officials required to lubricate the process, make a China-based production base even less competitive than two decades ago. Other surveys suggest that the cost of labor in China is now higher than that of Brazil, Mexico, and above that of smaller Latin American and Eastern European nations.

“Made in China” is not as cheap as it used to be, as labor costs have risen rapidly in the country's vast manufacturing sector. “Chinese factory workers are now getting paid more than ever: Average hourly wages hit $3.60 last year, spiking 64 percent from 2011, according to market research firm Euromonitor. That's more than five times the hourly manufacturing wage in India, and is more on par with countries such as Portugal and South Africa.”

In the 2000s, U.S. labor costs were twenty times that of China, according to the U.S. Commerce Department. Today, however, the same survey has U.S. wages only 4 times more than Chinese workers, with the gap closing rapidly due to rising wages and prices in China—as opposed to the United States and other industrial nations. Inflation is a significant problem in China, yet few foreign observers ever mention the issue in the context of either the currency or the economy as a whole.

As the new government of Donald Trump engages with Beijing in areas such as trade and economics, Washington needs to appreciate that the economic situation in China is changing rapidly and has significant political ramifications. Rising wages and prices are eliminating China’s relative advantage in the global competition for investment and production, while higher productivity nations, such as the United States, are actually becoming more alluring. One need only observe the growing flow of direct investment from China to other nations in Europe, Latin America and North America to understand that the People’s Republic is no longer as attractive a destination for capital as it was two and three decades ago.