China Must Pay for Its Brutal Human Rights Record 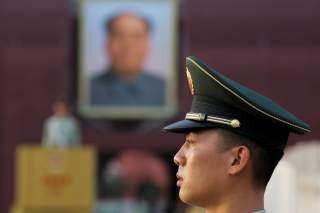 Thirty years ago, the People’s Liberation Army marched on Beijing. Troops fired indiscriminately on unarmed civilians. Tanks crushed the innocent underfoot. Hundreds, if not thousands, of people were murdered, while many others were thrown in prison for years or decades; some received lifetime sentences. Some protesters, like the man who stepped in front of an armored column, which was captured in an iconic photo, simply disappeared.

The international community responded with righteous outrage—an outrage that came swiftly, but ultimately proved illusory. The United States set the tone, with President George H. W. Bush dispatching his national security adviser, Brent Scowcroft, on a secret trip to Beijing in July just weeks after the president had announced a suspension of high-level meetings in response to the massacre.

Bush’s unmistakable intention was to keep U.S.-China relations on an even keel despite the murders that occurred between June 3 and June 4. A State Department document prepared for Scowcroft and Undersecretary of State Lawrence Eagleburger, who accompanied the national security adviser, laid out the “themes” for the visit. It described in anodyne language the Chinese government’s handling of “those of its citizens involved in recent events in China” as an “internal affair” and made President Bush’s priorities clear:

Bush recognized the value of the U.S.-China relationship to the vital interests of both countries. Beyond that, he had a deep personal desire to see the friendship between the Chinese and American people maintained and strengthened.

For his part, the president intended to do all he could to maintain a steady course because he believed deeply that a solid relationship between the United States and China was in the interests of world peace and international stability.

Even the Chinese Communist Party knew, while its crackdown on peaceful activists was ongoing, that the breakdown in bilateral U.S.-China ties in the aftermath of the slaughter would be temporary. The rest of the world—dictatorships and democracies alike—took note.

Thirty years later and Asia is in the midst of what might fairly be described as a human-rights crisis. Democratic institutions in the Philippines are under strain, with President Rodrigo Duterte’s war on drugs featuring thousands of extrajudicial killings. Hun Sen has wiped out the opposition in Cambodia while shutting down independent media and further tightening his own grip on power. Thailand’s future looks increasingly like its undemocratic past. Burmese armed forces have carried out a campaign of ethnic cleansing—and arguably genocide—against the Rohingya people. A 2014 report of the commission of inquiry on human rights in North Korea found that crimes against humanity have been committed. Those crimes include “extermination, murder, enslavement, torture, imprisonment, rape, forced abortions and other sexual violence, persecution on political, religious, racial and gender grounds, the forcible transfer of populations, the enforced disappearance of persons and the inhumane act of knowingly causing prolonged starvation.”

And then there is China, where the human-rights situation today is often described as the worst it has been since the immediate aftermath of the June 4 massacre. That is really saying something, given that the intervening years included the crackdown on Falun Gong, organ harvesting, the violent suppression of protests in places like Dongzhou, continuing enforcement of the reprehensible one child policy, and the imprisonment of a future Nobel Peace Prize winner.

Since Xi Jinping came to power in 2012, the space to engage in political speech has shrunk precipitously. Lawyers are jailed for the crime of practicing the law. Rights defenders are held incommunicado, tortured, forced to make televised confessions, denied medical care, and denied the dignity of a burial and gravesite upon their deaths. Chinese Communist Party ideologues are rewriting the Bible, tearing down churches, and throwing pastors and priests in prison for refusing to put the almighty Xi Jinping above the almighty God. The phrase “digital authoritarianism” has now entered the lexicon, with the Chinese Communist Party exploiting technology to extend its reach into all aspects of daily life.

Life in Tibet is so repressive that Tibetans have resorted to self-immolation in protest—a trend which accelerated in 2009, just months after the international community responded to a harsh government crackdown in Tibet, by showing up to the 2008 Beijing Olympics and celebrating China’s emergence on the world stage. Chen Quanguo, the Tibet Autonomous Region Communist Party Secretary from 2011 to 2016, so ruthlessly imposed order in the province that Xi sent him to Xinjiang to do the same.

Today, there are up to three million Muslims of Uyghur, Kazakh, and other ethnic minorities in concentration camps across Xinjiang, which is where they are imprisoned without trial for the apparent crime of worshipping Allah. Beyond the internment of hundreds of thousands of people (if not millions) in the camps, the United States is “alarmed by,” as one State Department spokesperson recently put it, “widespread reports of torture and cruel, inhumane, or degrading treatment; ever-present, high-tech surveillance; and coerced practices contrary to people’s faiths.” This is a campaign of cultural genocide, an affront to humankind, and the world has barely batted an eyelash.

Now is the time to correct the mistakes made in the aftermath of the June 4 massacre, and the United States must lead in doing so. To be sure, the United States and likeminded countries cannot coerce the Chinese Communist Party into fundamental reform. But they do have leverage, which they can use to encourage Beijing to moderate its most deplorable behavior. Sanctions on individuals, organizations, and corporations complicit in egregious rights abuses are a potentially useful tool—one that should be implemented. But even then, Washington should think bigger.

In bidding for—and winning—hosting duties for the 2022 Winter Olympic Games, China has handed the rest of the world significant leverage. Although it might be nice to separate international sport and international politics, it is naïve to assume that is possible, especially in China. The Chinese Communist Party uses the Olympics as a propaganda tool to enhance its legitimacy at home and improve its image abroad. The Party rightly interpreted enthusiastic global participation in the 2008 games as evidence that it could increase repression in the lead-up to major international events without incurring significant international pushback.

To be clear, absent significant changes in Chinese behavior during the next three years, the United States cannot participate in the 2022 Olympics without signaling acquiescence to China’s most flagrant human-rights abuses. Indeed, if Washington wants to give Beijing a green light to continue on its current path, there is perhaps no better way to do so than to send Team USA to Beijing in 2022.

The United States should, thus, begin working to rally like-minded partners (and convince those less concerned by Chinese abuses) and form an international campaign aimed at moving, boycotting, or canceling the 2022 Olympics. Beijing should be given a finite, relatively short period of time—six months at the outside—to take a number of clearly defined steps (at a minimum, closing the camps and releasing internees). If Beijing fails to do so, then Washington and its allies must be prepared to carry out whatever threat they agree upon. Ideally, the International Olympic Committee would be onboard for a cancellation or relocation, but the allies could also carry out a joint boycott or hold parallel games. Importantly, if China does comply with international conditions, then the United States must maintain the threat of a boycott right up until the Opening Ceremonies in order to discourage any backsliding.

Cancellation, relocation, or a mass boycott of the games would be a major international and especially domestic embarrassment for the Chinese Communist Party, one that it would prefer to avoid. Even so, this American effort might fail. Washington might find itself alone in a boycott of the Olympic games, with Chinese abuses continuing unimpeded. But at the very least, the United States would save itself from complicity in some of the most despicable human-rights violations of the modern era. Importantly, standing on principle, as the United States failed to do in 1989, would convey that human-rights violations stand in the way of a “solid relationship,” which would at least make Beijing consider the impact on bilateral ties of future abuses.

It is rare for a notorious human-rights abuser to willingly grant the free world the leverage it needs to hold it to account. We better make the most of it.

Michael Mazza is a visiting fellow specializing in foreign and defense policy at the American Enterprise Institute.