China Is Not Germany Before World War I 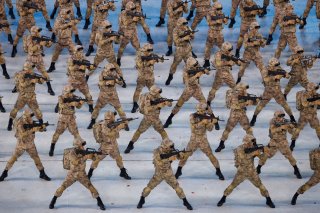 In characterizing the emerging threat that China poses to its neighbors and the rest of the world, many observers have invoked the analogies of Japan before World War II and Germany before World War I. This reading of history seems to indicate that the hegemonic ambitions and expansionist appetites of both empires probably made war inevitable. Today, China has similar ambitions and appetites.

The German example was invoked in a recently published book, The Long Game: China’s Grand Strategy to Displace American Order, which was written by Rush Doshi, a scholar now serving on the Biden administration’s China policy team. Doshi noted in an op-ed at one point “the rivalry between China and the United States in the twenty-first century holds an uncanny resemblance to the one between Germany and Great Britain in the nineteenth.” Analysis of the comparison invariably cites a famous memorandum written in 1907 by British diplomat Eyre Crowe (1864–1925), which examined British relations with France and Germany but focused primarily on an assessment of German foreign policy.

The “Crowe Memorandum” is widely credited with having predicted World War I, inasmuch as Crowe concluded that Berlin was “aiming at the establishment of a German hegemony, at first in Europe, and eventually in the world.” This would be “essentially opposed to vital British interests,” which prompted Crowe to judge that “an armed conflict cannot, in the long run, be averted, except by England either sacrificing those interests” or building a military capability sufficient to effectively deter German designs.

Crowe allowed for the alternative possibility that Germany’s goals were actually more limited and benign. Perhaps Berlin was merely “seeking to promote her foreign commerce, spread the benefits of German culture, extend the scope of her national energies, and create fresh German interests all over the world wherever and whenever a peaceful opportunity offers,” Crowe speculated. In this scenario, Germany would defer contemplation of any more expansive goals. But the crux of Crowe’s argument was that it should make no difference to London which of these two alternative goals Berlin was pursuing, because “the second scheme . . . may at any stage merge into the first” and thus yield “as formidable a menace to the rest of the world” as a Germany that had pursued hegemony with “malice aforethought.” Crowe’s bottom line was that “this is not a matter in which England can safely run any risks.” So regardless of German intentions, London must adopt “the same general line of conduct”: to deflect any German pursuit of mutual “understanding” and avoid any “gratuitous concessions” or accommodation based on the “vain hopes” that Berlin could be “conciliated.”

Crowe’s argument is the equivalent of that made in Washington today by those who assess that China seeks regional hegemony in East Asia and ultimately exclusive global hegemony; that its ambitions are essentially opposed to vital U.S. interests; and that Washington cannot safely run the risks involved in presuming that Beijing’s intentions are more limited or benign than that. American proponents of a hard line against China also echo Crowe in their insistence that any accommodative approach to Beijing, or one aimed at reassurance, would probably be unworkable or futile. Indeed, Crowe seems to have provided fodder for today’s critics of “engagement” with Beijing when he wrote (in 1907) that “the history of Anglo-German relations during the last twenty years . . . cannot be better described than as the history of a systematic policy of gratuitous concessions.” Much the same is frequently said about the last twenty years or more of U.S.-China relations.

But what Henry Kissinger called the “Crowe school of thought” about China today inherits the deep flaws in Crowe’s argument. Arguably the biggest blind spot in Crowe’s memorandum is inherent in his key assertion that it made no difference whether Germany was pursuing regional and global hegemony, or instead of the maximization of its prosperity and security and promulgation of its culture, because the latter “may at any stage merge into” the former. What Crowe failed to recognize or acknowledge was the possibility that the latter would merge into the former precisely as a result of (at least in part) British policies that resisted or opposed reasonable German pursuits. Crowe conceded that “it would be neither just nor politic to ignore the claims to a healthy expansion which a vigorous and growing country like Germany has a natural right to assert in the field of legitimate endeavor.” But other than a reasonably-sized navy (which did not approach the size of England’s), he did not specify much in the way of legitimate German interests. Most proponents of a hardline approach to China tend not to specify Beijing’s legitimate global interests either.

The key point is that it did make a difference which goal Germany was pursuing, because Berlin almost certainly became more disgruntled and, in turn, aggressive in response to British policies that appeared aimed at obstructing German ambitions.  Similarly, it makes a difference which goal China is pursuing today because denying the possibility of a more limited and benign goal than global hegemony—and adopting confrontational U.S. policies that push back against any extension of Chinese influence and power—would make it more likely that Beijing will feel the need to shift to more expansive and assertive goals.

Crowe not only overlooked the possibility of England being a variable in Germany’s strategic calculus; he essentially rejected the notion that London shared any responsibility for tensions between the two countries. In his analysis, it was “the direct action of the German Government [and its] entirely one-sided aggressiveness . . . which has been the all-sufficient cause of whatever obstacle there may be to the maintenance of normally friendly relations between the two countries.” For its part, England had demonstrated “the most conciliatory disposition” and an “honest desire to live with [Germany] on terms of absolute neighborliness.” Indeed, there was “no suggestion more untrue or more unjust than that England has on any recent occasion shown, or is likely to show in future, a parti pris [i.e., any prejudice] against Germany or German proposals as such.” Similarly, there is little acknowledgment in Washington today that the U.S. side bears any responsibility for bilateral tensions, or that Chinese behavior is in any way reactive to U.S. policies.

Kissinger, in his book On China a decade ago, provided his corrective to “the Crowe school of thought,” which in his view “would treat a successful Chinese ‘rise’ as incompatible with America’s position in the Pacific and by extension the world,” and treat “any form of cooperation . . . as simply giving China scope to build its capacities for an eventual crisis.” In Kissinger’s view, the central problem with Crowe’s analysis was “its seeming automaticity,” which offered no escape from “its self-imposed requirements, especially not from its internal assumptions.” Crowe “precluded cooperation or even trust” between England and Germany, and thus essentially declared that “there was no longer any scope for diplomacy.” This is reflected today in the widespread skepticism about the utility of engagement with China, presumptions about the futility of any efforts at reassurance, and the Biden administration’s explicit emphasis on competition over cooperation with Beijing.

But as with Crowe’s assessment of Germany, the rejection of an accommodative approach to China is based on specious assumptions about Beijing’s strategic intentions, premature dismissal of the potential benefits of reciprocal diplomacy, and inattention to self-fulfilling prophecies. To surmount these obstacles, Kissinger urged “a serious joint effort involving the continuous attention of top leaders [in both Washington and Beijing] to develop a sense of genuine strategic trust and cooperation” and to “make the US and China part of a common enterprise.” He also suggested that leaders on both sides “need to ask themselves the question apparently never formally posed at the time of the Crowe memorandum: Where will a conflict take us? . . . Which of the leaders who operated the international system that led to the First World War would not have recoiled had he known what the world would look like at its end?” No such forethought or foresight is apparent in the current race to the bottom in U.S.-China relations.

But even in Crowe’s time, the flaws and inherent dangers in his analysis were recognizable. As other historians have noted, the month after Crowe wrote his memorandum a dissenting view was offered by Lord Thomas Sanderson (1841–1923), a fellow senior British diplomat who had recently retired. Sanderson faulted Crowe for neglecting key elements of the German perspective. In language that is highly applicable to China today, he wrote that “It was inevitable that a nation flushed with success, which had been obtained at the cost of great sacrifices, should be somewhat arrogant and over-eager, impatient to realize various long-suppressed aspirations, and to claim full recognition of its new position.” He added that it was “not to be expected that Germany will renounce her ambition for [a global presence], which shall assist and support the development of her commerce, and afford openings for her surplus population.”  For the sake of comparison, he added that “if the mere acquisition of territory were in itself immoral, I can conceive that that sins of Germany since 1871 are light in comparison to ours.” In language that might be applied to the United States today, he wrote that “the British Empire must appear [to other countries] in the light of some huge giant sprawling over the globe, with gouty fingers and toes stretching in every direction.”