China is Not the Soviet Union 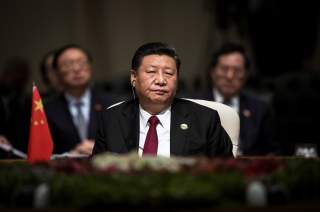 In evaluating recent alarmed assessments of China’s ambitions, one must recall that for decades the American intelligence community, in particular the Central Intelligence Agency (CIA), vastly exaggerated the power and hence threat posed by the Soviet Union. These assessments were the basis of huge military outlays by the United States, as well as its military interventions in places such as Vietnam and Afghanistan, which Washington feared were the next “dominoes” to fall. These concerns were scaled back only after the USSR collapsed, mainly under its own weight. We are now told, in an article published in Newsweek, that “China is waging a ‘cold war’ against the United States and trying to displace it as the world’s leading superpower” according to Michael Collins, the deputy assistant director of the CIA's East Asia Mission Center. Newsweek adds that “His comments echo those of other U.S. intelligence chiefs, who earlier warned of the challenge posed by China’s bid for global influence.”

These claims fly in the face of a key observation: during the Cold War the USSR was an expansionist power, which strongly believed that it was called upon to impose its kind of regime on other nations—if need be, to occupy them to bring about the needed changes. The USSR openly sought to dominate the world. China shared this expansionist ideology but abandoned it decades ago. It has not invaded nor occupied any nation and although it prides itself on having developed its own kind of regime (authoritarian capitalism, my words)—it has shown few signs that it seeks to impose this kind of regime on other nations, let alone the world.

The CIA official cited by Newsweek provides no evidence in support of his claims. It is provided by a leading anti-China hawk Elizabeth Economy, director for Asia studies at the Council on Foreign Relations, in an article published in the Wall Street Journal. She asserts that China has “destabilized the region” by militarizing seven artificial islands. However, where are the signs that the region has been significantly affected, let alone destabilized? There have been no regime changes in any of the countries in the area. None of them have allied themselves with China. On the contrary, the United States has increased its military presence and ties in several of these countries, including Vietnam, Thailand, the Philippines and India. Freedom of navigation has not been curbed, despite various claims of exclusive zones.

Ms. Economy repeats the often-cited fact that China opened one military base in Djibouti. The United States happens to have one in the same country, and—more than one hundred bases in other countries in the region. Economy is also alarmed by China’s Belt and Road Initiative: “Railroads, ports, pipelines and highways built by Chinese workers and funded by Chinese loans are already connecting countries across six global corridors.” It is true that China—which is highly dependent on a steady flow of energy and raw materials, because it has little of its own—is seeking to develop a variety of pathways to secure this flow. However, the various nations involved benefit from the improved infrastructure and enhanced trade. Economy finds that “Chinese state-owned companies have assumed control or a controlling stake in at least 76 ports in 35 countries” which is part of China’s drive to secure a steady and reliable flow of imports. Economy adds that “despite Beijing’s claims that such ports are only for commercial purposes, Chinese naval ships and submarines have paid visits to several of them.” It is a ritual all powers engage in, to show their feathers, to demonstrate friendly relationships, but hardly evidence of a Cold War. It would be a rather different story if Chinese warships were stationed in these countries. However, so far this is true only for American ones and those of its allies.

China has been reluctant to assume global responsibilities. It presents itself as a developing nation that needs to focus on its own growth. However, in recent years it has significantly increased its contributions to peacekeeping forces, foreign aid, humanitarian aid, and fights against piracy and terrorism.

To the extent that China does loom larger on the global scene, it is largely due to the leadership vacuum created by President Trump. It is China that now is championing free trade, forging free trade agreements in its own region and with the EU. And it works with Russia and the EU to save the agreement with Iran. The Cold War metaphor seems hardly appropriate.

Amitai Etzioni is a University Professor and Professor of International Relations at The George Washington University. He is the author of Avoiding War with China. A short film summarizes his international relations work.