China and Pakistan Join Forces Under the Sea 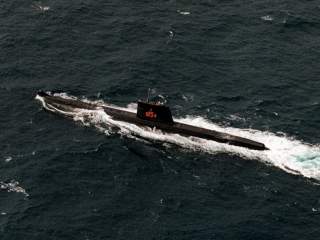 While attention has been on the simmering tensions in the East and South China Seas letely, a small event took place in the East China Sea off the coast of Shanghai. Pakistan Navy (PN) guided missile frigate Shamsheer and fleet replenishment vessel Nasr drilled with a pair of PLA Navy Type-054A Jiangkai II frigates, Xuzhou and Yangzhou from December 31 to January 1.

According to Chinese reports, the fast-paced, high-intensity exercise involved day and night maneuvers including joint escort, counter-piracy and live-firing. This constitutes a logical progression from the limited scope when this bilateral exercise first began in 2003 as a simple search-and-rescue drill. The objectives of these exercises are to hone interoperability between the two navies, while affording PN personnel the opportunity to get acquainted with Chinese technologies.

What was new in this latest iteration, however, was the inclusion of an anti-submarine warfare (ASW) component for the first time. Shamsheer, Xuzhou and Yangzhou cooperatively tracked a simulated submarine threats in the exercises. The ships relied on close communication, information-sharing and passive sonar techniques to triangulate the position of the suspected ‘enemy’ submarine, eventually striking it with a simulated ASW torpedo by one of the Chinese frigates.

This exercise marks yet another milestone for Sino-Pakistani naval cooperation. Commodore Bilal Abdul Nasir, Commander 25th Destroyer Squadron who led the PN flotilla, called the exercises “very significant” as they sought to enhance interoperability and cohesion between the two navies, adding euphemistically that "the time-tested relations, which are often referred as higher than the Himalayas, deeper than oceans, sweeter than honey, and stronger than steel, are testimonies to the strong bonding between the two countries and their people."

Just how deep is the Sino-Pakistani naval relationship?

Pakistan has often been touted by Beijing as its foremost “all-weather friend.” The bilateral naval relationship is justifiably the most developed China has cultivated with a foreign state. The 2003 exercise was actually the first joint training exercise the PLA Navy ever conducted with a foreign counterpart. Its presence at the inaugural PN-hosted AMAN series exercise in the Arabian Sea in 2007 was also the PLA Navy’s first-ever participation in a foreign multinational naval exercise.

However, the China-Pakistan Economic Corridor (CPEC), revolving around the Gwadar deep-sea port on the restive Pakistani province of Balochistan, remains a controversial project. Top Islamabad policy elites sought to promote CPEC as a flagship project that promises long-awaited economic invigoration for the country. But this project is not without controversy; it not only impinges directly upon the pre-existing Indo-Pakistan terrestrial disputes (especially since the CPEC route will also pass through Pakistan-occupied Kashmir), but also invites domestic skepticism within the South Asian country as to the extent of benefits for people in the province.

As such, Gwadar is viewed by both local and outside skeptics as more of a pawn in Beijing’s grand plan to entrench its Indian Ocean naval presence. Islamabad, it must be said, did not shirk from this expressed intent. “We have asked our Chinese brothers to please build a naval base at Gwadar,” Pakistan Defense Minister Chaudhary Ahmad Mukhtar told the Financial Times in May 2011, confirming that the request was conveyed to China during the visit by Prime Minister Yusuf Raza Gilani to Beijing. Meanwhile, a senior Pakistani official was quoted as saying that “the naval base is something we hope will allow Chinese vessels to regularly visit in [the] future and also use the place for repair and maintenance of their fleet in the [Indian Ocean region].”

In fact, Pakistan has long sought to facilitate the enhancement of Chinese naval presence in the Indian Ocean, by tapping its strategic geographical location in the Arabian Sea and long coastline. “We can provide facilities, ports, logistics, maintenance among other things (to Chinese navy),” a PN official remarked. Obviously, doing so helps Islamabad stave off the pressure from India, with whom the former has long perceived a naval force imbalance, especially in the undersea arena as New Delhi seeks to enhance its submarine capabilities.

Traditionally, Pakistan lags behind India in the number of submarines but this is at least partially compensated for with quality, especially from the 1980s to 1990s. The French-built Agosta-90 (Khalid) diesel-electric powered submarines (SSKs) gave PN an air-independent propulsion (AIP)–also the first-ever such capability in the Indian Ocean. PN boats also enjoy an edge in standoff striking power; being armed with UGM-84 Sub-Harpoon underwater-launched anti-ship missiles.

By contrast, the Indian Navy has relied on a motley mix of early Western and Soviet SSKs. The West German-built Type-209 (Shishumar) can be deemed most modern of all, but they lack standoff weapons. They operated alongside the old Soviet Project-641 Foxtrot class, and even the Kilo class (Sindhughosh) later inducted by the Indians was a less-capable, export model of the earliest Project-877 variant first introduced by the Soviets in the 1970s. Likewise, the end of lease of a Soviet Project-670 (Charlie-I) class nuclear submarine, equipped with P-70 (SS-N-7 Starbright) anti-ship cruise missiles, means that the Indian Navy lacked an equivalent capability until the mid-2000s.

But Pakistan’s qualitative advantages vis-à-vis India are fast eroding, especially ever since India reinvigorated its undersea capabilities by leasing a Project-971U (Akula-II) class nuclear submarine leased from Russia in the mid-2000s and retrofitting the Sindhughosh SSKs with Russian Klub-S cruise missiles. Despite recent setbacks, such as the accident involving the Kilo boat Sindhurakshak in 2013, the Indian Navy is tipped to make further progress. Its first indigenous nuclear missile submarine Arihant is close to operational status and India’s first AIP-equipped SSKs will arrive upon completion of the final pair of Project-75 Scorpene boats. Even in the interim, the Shishumar SSKs began to be retrofitted with Sub-Harpoons acquired from Washington.

Islamabad watches these alarming developments in consternation, given that PN premises its maritime defense on a strong subsurface capability to deter the stronger Indian Navy through sea denial and limited defensive sea control. In particular, submarines are the PN’s best hope to break a conceivable Indian blockade of key Pakistani ports such as Karachi, on which the country’s survival hinges in times of war.

Logically, Islamabad’s response will be to sustain and enhance PN’s undersea capabilities, finding ways to keep in pace with, if not restore the qualitative advantages over, the Indian Navy. But PN has long suffered from chronic budget shortfalls. In November 2015, just 10 percent of the defence budget was reportedly allocated to PN, making even daily routine operations, maintenance and repairs a challenge. Not to mention also narrowing PN’s procurement options in the face of critical capability gaps.

For decades, PN has operated a mixture of American and European surface ASW and subsurface assets. As the Cold War-vintage American and European frigate force—PN’s premier surface ASW platforms—gradually atrophied, seeking timely replacements took on greater urgency. The aim, as outlined by Pakistan chief of naval staff, Admiral Muhammad Afzal Tahir, in April 2008 during an interview with Jane’s Navy International, was to acquire at fair price and within a relatively short timeframe four to eight second-hand ships to fill the fleet capability gap for a five-to-ten-year period.

Four modified Type-053H3 Jianghu (F-22P Zulfiquar) frigates and six Z-9EC ASW helicopters procured in April 2005 by PN would for the time being partially fill the critical shortfalls. But clearly PN needs more, and prefers Western. The six ex-British Type-21 (Tariq) frigates are fast reaching the end of their useful lifespan, and one was recently retired. Yet Western choices are not forthcoming. Of the at least six Oliver Hazard Perry class frigates Islamabad had requested from Washington since 2007, only one (Alamgir) was obtained. Earlier attempts to procure second-hand British Type-23, Greek Elli and Belgian Wielingen class frigates were unsuccessful.

The same conundrum applies to PN’s submarine procurement. A number of foreign vendors including China made their offerings, and Islamabad initially preferred Western makes, given its long history of operating such boats. Pakistan’s quest for Type-214 SSKs floundered due to domestic opposition in Germany. Paris refused to sell the Scorpene because, among various reasons, it is supplying the same boats to India; technology transfer problems; and the 1994 Agosta submarine scandal. These circumstances mean that Islamabad found it difficult, if not impossible, to procure from Western sources.

PN has therefore come to embrace Chinese naval technology more readily, calling some of which—in particular the F-22P frigates—to be “as good as in Western countries.” PN officials also rejected concerns within the National Assembly’s Standing Committee on Defence regarding inferior Chinese technology, justifying that the JF-17 Thunder fighter-jets co-produced with China had proven to be world-class. During an interview with Global Times in April 2014, Pakistan CNS Admiral Asif Sandila remarked that “as a matter of fact I will say the best of our ships are from China.”