China Poses the Biggest Threat to the U.S. Elections 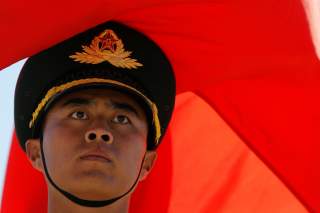 Did you think the trade war was bad for U.S.-China relations? Well recently, President Donald Trump upped the stakes and further escalated tensions by accusing the Chinese of interfering in the U.S. elections. To back up his claims, the president pointed to a four-page advertorial the state-controlled China Daily took out in the Des Moines Register, which criticized Trump’s handling of the trade war. Vice President Mike Pence joined the president’s criticism, lambasting Beijing’s use of “covert actors, front groups, and propaganda outlets to shift America’s perception of Chinese policy.”

Much of the expert analysis regarding the Trump administration’s statements centers around whether the Chinese are attempting to hack into our voting infrastructure as the Russians did in 2016. Critics say the president is escalating a situation without evidence, and they cite the fact that cyber experts note no hacking. They’re right in that, as of now, there is no evidence to suggest the Chinese are doing what the Russians did.

But leaving the analysis there would be incomplete. What the Chinese are doing is much more sophisticated than what the United States saw in 2016 from the Russians. The president has cited just one example of an ongoing attack that will only intensify as Washington’s rhetoric and actions continue to undermine Chinese interests.

Experts note that Beijing purposefully targeted Iowa to take aim at Republican districts that stand to suffer economically from Trump’s tariffs against China. Yet their less overt propaganda moves are even more troubling. The U.S.-China Economic and Security Review Commission published a report in August 2018 noting that the Chinese Community Party is conducting a sophisticated and covert propaganda push within China, but its efforts aren’t just domestic. The party is also disseminating propaganda in the United States through domestic newspaper ads, on college campuses through Beijing-sponsored professorships, and in think tanks with state-supported fellowships. China has been doing this for years, but many experts identify targeted districts with local newspapers as a recent phenomenon.

Still, this kind of attack is not new. Foreign countries will always seek to influence U.S. elections. America must be better prepared for attacks and be ready to respond in kind. Americans can properly respond to Chinese malfeasance through better education and retaliation.

Informing our voters is of critical concern. As news industry analyst Ken Doctor suggests, newspapers ought to consider adding a more descriptive editor’s note before paid advertisements of what an advertorial represents—especially when coming from a growing foreign adversary like China. Furthermore, American companies are positioned well to inform employees and consumers about political impacts on their business, such as how Performance Bicycle penned an article to their patrons about the effect of the tariffs on the sale of bikes and bicycle products.

Beyond this, the United States and its allies need to respond to Chinese influence more generally in an effective and persuasive manner. In September, the Department of Justice required Chinese state-run media outlets, Xinhua News Agency and China Global Television Network, to register as foreign agents. This is a good start, but the United States can do more to increase the transparency of those working on behalf of foreign countries.

Economically, there is much work to be done to curtail an expanding Chinese sphere of influence. Experts warn the United States is falling behind the Chinese in soft power influence globally as the Chinese have made significant inroads in global infrastructure financing and Hollywood. America must regain control of its cultural institutions, or at least match the global investment as it is trying to do through the passage of the BUILD Act. Finally, social-media companies need to ensure that American voters are not being unduly misled by foreign entities seeking to spread misinformation by flagging content from suspect sources and labeling repeated disseminators of fake information.

Americans should not deny that foreign adversaries seek to undermine U.S. elections and influence the political outcomes of those elections. Also, the United States must be better prepared for election interference by informing voters of foreign efforts and reclaiming its global influence to curb a growing economic and geopolitical threat from China.

Tyler Grant is a Young Voices contributor and a practicing attorney. His work has previously appeared in the Weekly Standard, National Review, and the Washington Examiner. You can find him on Twitter @The_Tyler_Grant.