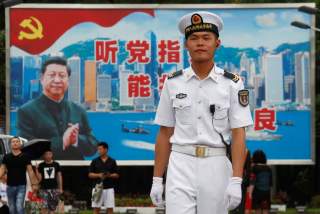 Finally, there is an epilogue to the drama of Kaiser Wilhelm and the German navy that President Xi might well want to recall and ponder: the regime that took Germany into the war did not survive its ending. In the closing act of the Great War, when ordered to undertake an offensive against the formidable defensive barrier along Britain’s island chain, the crews aboard the Kaiser’s fleet of battleships had the good sense to mutiny and thereby avoid certain death in a suicidal mission. The crews, who had once cheered Wilhelm before the war, now turned on him as it became clear to the sailors that the Kaiser’s admirals were only all too willing to sacrifice them on a death ride for no tangible gain—their warships to serve as their steel coffins. The mutiny of the sailors triggered a revolution that quickly spread throughout Germany, bringing an end to the Kaiser’s regime. Wilhelm had to run away, never to return to Germany, his cherished fleet’s mutiny acting as the catalyst for political upheaval. How ironic a twist of fate that the fleet built to unite the German people behind the regime instigated its downfall.

John H. Maurer serves as the Alfred Thayer Mahan Professor of Sea Power and Grand Strategy at the Naval War College in Newport, Rhode Island. The views expressed in this article represent those of the author alone.