China and Russia Are No Match for World Order 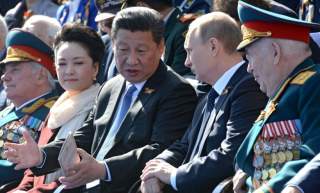 This year’s G7 summit in Ise-shima, Japan was full of spectacles worthy of arresting headlines, including U.S. President Barack Obama’s historic embrace of atomic bomb survivors in Hiroshima on May 27th. Prime Minister Abe as host has enjoyed a considerable boost for his efforts as host and now is confidently heading into an upper house election on July 10th. Like most international summits, however, what lies beyond the headlines are the agreements made among leaders even if not declared in the moment. Much of what the G7 leaders was focused on was the creation of a joint approach to the global rise of revisionism led by China and Russia, who resent not being part of the gathering. The most consequential outcome of the two-day event on Japan’s idyllic island was the emergence of a new phase in the ongoing Sino-Japanese geoeconomic competition. It characterizes a global trend for the world’s leading liberal economies for years to come.

Nationalist-driven and aggressive foreign policy is ubiquitous among authoritarian regimes. China and Russia in particular have been challenging the status quo by displays of military force in Crimea and the South China Sea. Despite regional apprehension and American warnings, the Chinese representative at the recent Shangri-La Dialogue warned  that in the South China Sea, “We do not make trouble but we have no fear of trouble.” While divergent objectives guide such self-aggrandizing behavior, Beijing and Moscow make strange bedfellows under one common goal: to create a new geopolitical reality in opposition to the current liberal world order.

This emerging geopolitical trajectory is particularly evident in recent global geoeconomics increasingly dominated by Beijing's $8 trillion One Belt One Road (OBOR) initiative. This grand economic project revolves around major investment projects to purportedly promote global connectivity. In reality, however, OBOR is Beijing’s commercial-military scheme designed to advance its great power status while generating jobs overseas for the country’s surplus labor. Therefore it has a peculiar focus on investment in strategic projects despite questionable feasibility, including the floundering $5.5 billion Jakarta-Bandung high-speed railway traversing Indonesia, a country crucial to China’s geostrategy for staking claims in the South China Sea.

Despite the dubious economic outlook for OBOR, China looks to pursue its global geoeconomic agenda in earnest by attracting multilateral investment in its $100 billion Asian Infrastructure Investment Bank (AIIB). As a result, Beijing has been literally buying up space in the world’s key geostrategic locations from Djibouti to Nicaragua. Paradoxically, the significance of OBOR is not China’s self-aggrandizing expansion of its geopolitical influence under the veneer of economic cooperation. Rather, the significance lies in the absence of a solid response from liberal countries countering Beijing’s geoeconomic agenda.

Future historians will likely remember the G7 summit in Ise-shima last week as marking the revenge of internationalism. The event defied the growing skepticism toward the annual gathering by generating an internationalist consensus among the world’s most advanced economies on today’s most pressing geopolitical issues. Of such issues South China Sea stood out above all else. Given their burgeoning trade relations with China, European countries have historically diverged from the U.S. and Japan over Beijing’s assertiveness. Indeed, all European G7 member states—the United Kingdom, Germany, France, and Italy—signed up for their founding member status in the AIIB in 2015. The latest G7 solidarity over Asian maritime security underscored the member countries’ commitment to the liberal world order transcending geographical distance.

G7 leaders went on to craft a solid strategy to counter China’s OBOR. They endorsed the G7 Ise-shima Principles for Promoting Quality Infrastructure Investment that aims to “bridge the existing global demand-supply gap of infrastructure investment by promoting quality infrastructure investment.” This latest G7 initiative has its origin in Tokyo’s $110 billion Partnership for Quality Infrastructure that seeks to promote Japan’s superior quality as well as multilateral cooperation with various international institutions, such as the World Bank. Japan’s infrastructure agenda has already won various major projects across the Eurasian Heartland in direct competition with China’s OBOR while bolstering Washington’s New Silk Road Initiative, including the much-delayed Turkmenistan-Afghanistan-Pakistan-India (TAPI) natural gas pipeline. During the Ise-shima summit, Japan’s internationalist approach to global infrastructure development allowed the country to enlist G7 support for its agenda, further boosting its financial commitment totaling $200 billion for the next five years.

As a result, Japan’s newfound internationalist drive for global infrastructure stands to reshape the geoeconomic map currently dominated by China’s OBOR. Japan has an established track record for leading multilateral consortiums in major infrastructure projects, such as the Japan-Turkey consortium for developing Turkmenistan’s Galkynish gas field that had been dominated by China until 2015. The latest G7 infrastructure initiative will boost Tokyo’s multilateral cooperation globally, potentially constraining Beijing’s ability to engage with local governments.

Moreover, Beijing’s own undoing may ironically strengthen Japan’s G7 response to China’s geoeconomic challenge. In fact, economic viability has frequently failed to keep up with Beijing’s unbridled ambitions for the OBOR, often leading to local backlash. For example, as Jakarta learned no end was in sight for the Beijing-funded Jakarta-Bandung high-speed railway imbroglio, Indonesian president Joko Widodo met Japanese Prime Minister Shinzo Abe during the G7 in Ise-shima to personally seek Tokyo’s investment in a major seaport project. During the summit, Vietnam also welcomed the Tokyo-led G7 initiative for global infrastructure, a move with significant geopolitical implications given Hanoi’s simmering rivalry with China that was on full display during President Obama’s visit in advance of the event.

The significance of this year’s G7 in Japan in advance of the G20 in China in September will be judged by which summit ultimately sets the tone for either the enduring nature of the liberal international order or sweeping tide of revisionist authoritarianism. Obama’s historic Hiroshima and Vietnam visits were symbolic of the legacy he hopes to leave. Yet, symbolism risks complacency without action. The G7’s latest initiative for global infrastructure development confirmed the member countries’ internationalist commitment but whether they can remain unified in the face of Chinese and Russian revisionist alternatives such as OBOR or the Eurasian Economic Union will have to be seen. As Japan passes the G7 baton to Italy next year, the world anxiously expects the world’s seven most advanced democracies and economies to lead toward the triumph of internationalism over revisionism.

Joshua W. Walker, PhD (@drjwalk) leads the Japan work at the German Marshall Fund of the United States, teaches Security Policy at George Washington University and is Vice President at APCO Worldwide where he leads the APCO Institute where Hidetoshi Azuma (@hazuma_jpn) is an Adjunct Fellow and Master’s student studying Security Policy at GWU.