China and Russia vs. America: Great-Power Revisionism Is Back 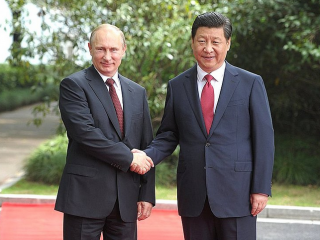 Growing tensions between the West and Russia and between the United States and China go well beyond competing interests in a rustbelt in eastern Ukraine or over uninhabited rocks in the South China Sea. Fundamentally, they are about whether Russia and China will acquire sphere of influences in their neighborhood. Russia seeks special influence in the former Soviet Union and China is looking to make its nine-dash line in the South China Sea a reality.

For almost a quarter of a century, the United States has said it opposes a return to a spheres-of-influence order of the kind that existed in the Cold War or prior to World War II. In fact, in 2013, Secretary of State John Kerry even formally repudiated the Monroe Doctrine. Successive presidents have endorsed a Europe “whole and free” and the principle that states should get to decide their own foreign relations. This policy had real consequences, in Europe especially—since the collapse of the Soviet Union, NATO has expanded from sixteen countries to twenty-eight and the European Union from eleven to twenty-eight.

However, it was relatively easy to oppose a return to spheres of influence when no other major power was actively trying to reconstitute it. Now, Russia is using hybrid warfare to seize territory in Europe, and China is using land-reclamation tactics in the South China Sea. While Russia and China are very different actors, these strategies of territorial expansion present the United States with a particularly thorny problem. U.S. rhetoric is consistent—it opposes a return to a spheres-of-influence order—but it is unclear what this means. So far in Europe, it involves imposing costs on Russia for seizing territory in Ukraine, but not stopping it from doing so or reversing it after the fact. In Asia, it means diplomatic efforts on maritime security, but nothing to punish or stop China’s strategy of changing the facts on the ocean.

To understand how to deter Russian and Chinese efforts it is necessary to grasp one key feature of a revisionist strategy of territorial expansion: revisionist states traditionally go after the nonvital interests of their great-power rivals. When a rival power threatens your vital interests, it is clear that you should push back. But, what is the responsible course of action when the dispute is over something that hardly anyone has ever thought about or sometimes even heard of?

Of course, the term nonvital interest is somewhat misleading and only holds true when viewed narrowly and in isolation. The way in which a state increases its influence matters profoundly. Annexation and unprovoked invasion constitute a major breach of the peace and threaten vital U.S. interests. Moreover, while small rocks or strips of territory may be of limited strategic importance individually, they can acquire a much greater value in the aggregate.

Nevertheless, the fact that no treaty has been breached and the territory itself seems to be of limited importance is highly significant to the dynamics and psychology of any given crisis. The fact is that the small strategic value of the territory in dispute with a revisionist state usually appears to the dominant power to be vastly and inversely proportionate to the extraordinary cost that would be incurred from going to war over it. This is the great advantage that a revisionist power has and one that it can ruthlessly exploit as long as it doesn’t overstep its mark. After all, what American president wants to risk nuclear war for the Donbas? To put it another way, how many vital interests is a state willing to jeopardize for a nonvital one? Therefore, if the revisionist power is smart, and it usually is, it will pick territories precisely because they lack significant strategic value to rival great powers, even if they are viewed very differently by the smaller country upon which it preys.

The revisionist state can also reduce the risk of a military response from Western powers with another tactic. The aggression must not take the form of an outright invasion, but instead it must involve something else, such as coercive diplomacy to address the “plight” of its nationals stuck outside its borders or using civilian assets to establish facts on the ground. Done in this way, the situation will appear complicated. And, a “complicated” situation in a place that is “not vital” immediately undercuts domestic and international support for a robust response.

This is not a new problem. It is textbook revisionism. Its purpose is to make deterrence extremely hard and to encourage rival great powers to accommodate them diplomatically or to limit their response so that it is ineffective. It was for this reason that the British Empire used accommodation as a pillar of its grand strategy for half a century prior to its catastrophic failure in the late 1930s. Indeed, until 1938, accommodation or appeasement was viewed very positively in Britain. As the historian Paul Kennedy described it, it was “a policy predicated on the assumption that, provided national interests were not too deleteriously affected, the peaceful settlement of disputes was much more to Britain’s advantage than recourse to war.”

The complexity of the revisionist challenge is such that accommodation is likely to make a comeback, at least in some quarters. It will be framed, as it usually is, as part of a diplomatic effort that facilitates additional influence for the revisionist state in exchange for some restraint or cooperation on its part. Although this challenge is in its early stages, there are multiple examples of Western strategic thinkers making this case for Europe and East Asia. These thinkers point out that most revisionist states are not the second coming of Nazi Germany, so a negotiated settlement stands a better prospect of success.

For instance, Jeremy Shapiro of Brookings has argued for a wide-ranging diplomatic settlement with Russia that would recognize its special role in its neighborhood in exchange for it foreswearing military aggression to achieve its aims. Harvard Professor Stephen Walt argues that deterrence is counterproductive and accommodation far more preferable when dealing with a power, like Putin’s Russia, that is driven by fear and insecurity. The Australian strategist Hugh White has argued that the United States needs to sit down with China and the other major powers in the Pacific to divide up the region.

For the U.S. precedent to be a good one for Russia or China, one would have to believe that these countries would be equally well disposed to protecting long-term American interests as the United States was with Britain. To pose the question is to know the answer. For whatever hope there is of thinking that a democratic Russia or a democratic China would uphold the rules of the international order, there is no reason to think that Russia’s dictatorship or China’s authoritarian regime would do so. Instead, they would likely build on their gains, albeit gradually, and challenge the regional order in Europe and Asia.

The second reason accommodation won’t work is new—we live in a postcolonial world in which subjugated peoples are no longer passed around to satiate great powers. Britain pursued appeasement because it was an empire and existed in an age of empires. It had possessions it could give away, regardless of what the locals felt. And, it felt little compunction about selling out small states in Central and Eastern Europe, since the very existence of these states struck them as odd—more the result of an idealist American president than clear-headed balance-of-power thinking.

We, by contrast, live in a postimperial age. The United States leads an order in which it enjoys a privileged position, but it does so only because the vast majority of states want it to be that way. In an order dominated by democracies, the United States cannot just sit down with its competitors and rewrite the futures of independent countries and their populations. The very spectacle would be stomach turning and hugely damaging to the legitimacy of the order. Moreover, the states affected would take matters into their own hands. We would see a return to regional rivalries in short order.

The Future of Deterrence

If accommodation remains undesirable, how should the United States and its allies deter modern revisionism? As long as revisionist states carefully choose their targets and means, there is no easy answer to the problem we face. It is simply not realistic to threaten war over each and every revisionist act for the aforementioned reasons. However, there are steps the United States can take.

The first is to describe revisionist acts for what they are. We should not downplay or seek to move on from territorial aggression. We must explain why it is an egregious violation of the international order, even where “nonvital” interests are concerned.

The second is to strengthen deterrence by denial. The United States should build defense capacity in vulnerable states and limit the offensive capabilities of revisionists, including training and equipping other countries to deal with unconventional warfare.

The third is to strengthen the regional and global order by making opposition to territorial expansion a cornerstone of U.S. foreign policy and by developing legal and diplomatic paths to counter it. In a practical sense, this means pressuring European nations to back the Philippines right to take a case against China over the South China Sea dispute and pressuring the BRICS to condemn Russia’s annexation of Crimea.

Great-power revisionism is a centuries-old challenge. Previous leaders have failed to deal with it not because they were incompetent, but because it exploits real vulnerabilities in how states calculate their interests and devise their foreign policies. There is no easy solution, but some forewarning about the nature of the problem can, at least, lead to a diplomatic forearming.

Thomas Wright is fellow and director of the Project on International Order and Strategy at the Brookings Institution. Previously, he was executive director of studies at the Chicago Council on Global Affairs, a lecturer at the Harris School of Public Policy at the University of Chicago and senior researcher for the Princeton Project on National Security.