China Should Pay a Financial Cost For Its Coronavirus Lies 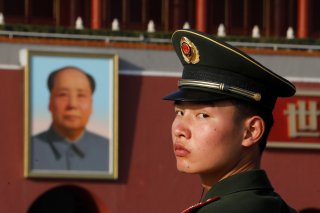 As a direct result of the untruths, people died and economies collapsed. Beijing must pay for the damage it maliciously inflicted on the world.

China’s misdeeds are far worse than people have characterized them. Most critically, China hid the fact it knew that the novel coronavirus, COVID-19, could be transmitted from one human to another.

Beijing admitted that on January 20, when Zhong Nanshan, the famed Chinese pulmonologist, at a televised press briefing talked about two such transmissions in Guangdong province. The same day, the National Health Commission officially confirmed the human-to-human spreading of the disease.

Yet doctors in Wuhan knew by the second week of December that human-to-human transmissions were occurring as there was no other explanation for the particular cases they were observing.

Chinese officials, however, assured the World Health Organization that such transmissions were not possible. As a result, WHO issued its infamous tweet of January 14 propagating China’s false position.

WHO’s assurances undoubtedly lulled countries into not taking the precautions that they would otherwise have adopted.

China’s sin was compounded because, while it denied the possibility of human-to-human transmissions, it worked hard to prevent other countries from imposing travel restrictions and quarantines, especially prevailing on WHO to do its bidding. As the organization stated on January 10, “WHO advises against the application of any travel or trade restrictions on China based on the information currently available on this event.” The critical words in this advisory are “on the information currently available,” in other words, information supplied by China itself.

Even China’s lesser untruths had severe consequences. As has become evident—and as the U.S. intelligence community has concluded—China intentionally undercounted the number of coronavirus cases.

China’s undercounting helped create a false sense of security. “I think when you looked at the China data originally, and you said, ‘Oh, well there’s 80 million people,’ or 20 million people in Wuhan and 80 million people in Hubei, and they come up with a number of 50,000, you start thinking of this more like SARS than you do this kind of global pandemic,” said Dr. Deborah Birx, the White House coronavirus coordinator, on March 31 at the daily press briefing. “So I think the medical community made—interpreted the Chinese data as, that this was serious but smaller than anyone expected, because I think probably we were missing a significant amount of the data, now that when we see what happened to Italy and we see what happened to Spain.”

Surely, public health officials elsewhere, convinced that the coronavirus outbreak was no worse than SARS, reacted the same way as America.

We do not know what China’s leaders in fact intended in December and January, but they knew what COVID-19 did to China. If they wanted to cripple other societies with the virus, they would have done what they in fact did.

So should China pay? Senator Marsha Blackburn, the Tennessee Republican, said Beijing should forgive some of its holdings of American debt and has sponsored Senate Resolution 553 to that effect.

She’s absolutely right, of course, but Beijing is unlikely to be that remorseful. Other Americans, therefore, are resorting to more coercive means, going to Federal court. A lawsuit seeking $20 trillion in damages has been filed in Texas, and there is a similar one in Florida. There is also a case in Nevada.

There does not seem to be a practical judicial remedy in America, however. Cases in U.S. courts are unlikely to get far because of the Foreign Sovereign Immunities Act.

Americans are not the only ones who are angry. Jurists in India filed a case against China at the U.N. Human Rights Council, and London’s Daily Mail reports that a study shows Beijing owes Great Britain 351 billion pounds in coronavirus damages.

Yes, there is the International Court of Justice, but China can refuse to submit to its jurisdiction.

So what will countries do? Denied access to courts, the aggrieved can take matters into their own hands. They can, for instance, seize China’s assets.

Americans have been talking about confiscating China’s hoard of U.S. Treasury obligations, in excess of $1 trillion.

China would excoriate Washington, claiming that such an action was a repudiation of indebtedness. It would also bash America as an irresponsible steward of the global financial system. Yet Beijing could not make that claim stick if the issuers of other major currencies—London, Brussels, Bern, Ottawa, and Tokyo, for example—also confiscated assets at the same time.

Of course, Beijing could retaliate by seizing assets in China, but that is not going to help them. Chinese officials desperately need the help of foreign businesses to revive an economy that is in the midst of a coronavirus-caused contraction. China has no good retaliatory options.

There’s nothing Beijing can do to ever make countries whole for maliciously spreading the coronavirus because there is no real compensation for lives lost and to be lost. Yet the world must express its indignation and take actions that impose great costs on the Chinese state. If nothing else, doing so will help deter China and other malign actors from causing such harm again.

China committed a crime against the world, and somehow it must pay.