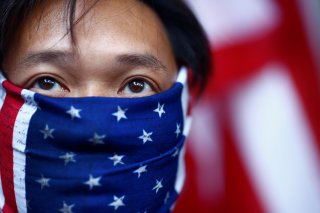 How should the United States respond to China’s ever more flagrant violations of its binding treaty obligations under the Sino-British Joint Declaration on Hong Kong? Doing nothing, or worse, guaranteeing that democracy and individual freedom will be preserved in what is a Chinese administrative territory and then failing to deliver, would be an enormous blow against the United States’ standing and credibility.

Additionally, making the policy dilemma more fraught is the affection with which Americans have for Hong Kong and its people, the corollary being that there is a deep aversion to any approach that involves cutting losses and abandoning Hongkongers to whatever fate Beijing has in store for them. In this sense, and while Hong Kong is just one piece on the chessboard, there is little national appetite for treating it as a pawn to be sacrificed in the pursuit of a greater strategic purpose.

To the extent possible, specific measures responding to Beijing’s moves should be aligned with broader strategic plans to compete with China on U.S. terms. All the while, the impacts on Hongkongers must be kept in mind.

The United States must find ways to compel China to reconsider, slow down and possibly even reverse the erosion of the territory’s liberal institutions. Fortunately, options are available because Beijing has greatly underestimated Hong Kong’s continued importance to the mainland economy. Or perhaps it has deliberately underplayed this importance hoping the United States and others will believe countermeasures to be hopeless. Regardless, and despite the fact that Hong Kong’s GDP is only about one-thirtieth the size of the mainland, it remains the third most important international financial center in the world after New York and London.

Significantly, the financial center of Hong Kong confers essential and unique advantages for China which Shanghai cannot replicate due to the lack of trust in mainland Chinese institutions and policies. Hong Kong remains the gateway for capital flows out of China and international flows into China. Through listing on the Hong Kong Stock Exchange—holding stock worth around US$ 5 trillion—the issuing of bonds in various currencies, or the raising of private equity, going through Hong Kong is the primary way Chinese firms access international capital markets. On the flip side, about 60 percent of foreign direct investment into China goes via Hong Kong. International companies seeking to enter the mainland economy do so through locating head offices in Hong Kong to secure an acceptable level of legal and regulatory protection from arbitrary Chinese rules. It is estimated that U.S. multinationals operate up to fourteen hundred offices in Hong Kong. Almost all of these are to oversee operations in the mainland.

Furthermore, Hong Kong is essential to Chinese hopes of a greater internationalization of the Renminbi (RMB). The RMB is only used in about 2 percent of global transactions. Even when it comes to China’s international dealings, well over 90 percent of Chinese foreign payments are settled in currencies other than the RMB with about 80 percent settled in U.S. dollars. This reliance on foreign currencies is costly given the higher transaction costs. It also exposes China to far more exchange rate risk than Beijing is comfortable with and effectively outsources the management of such risks to the United States.

This is where Hong Kong comes in to serve as the primary offshore RMB hub, with only places such as London, Singapore, and Taiwan being niche players for RMB transactions. Indeed, in the more than twenty bilateral currency swap agreements China has signed providing liquidity to support trade in RMB, about 90 percent of these RMB transactions are settled through Hong Kong.

Bear in mind that Hong Kong’s financial and economic role is essential to Xi Jinping’s flagship plans such as the Belt and Road Initiative (BRI) and Made in China 2025 (MIC 2025) blueprint to upgrade its entire economy. For example, Hong Kong is central to the Guangdong-Hong Kong-Macao Greater Bay Area which links directly with the BRI’s China Indochina Peninsula Economic Corridor.

More than this, Beijing is heavily relying on Hong Kong as an established hub to organize and arrange finance for Chinese and foreign firms to fund the BRI, evidenced by the establishment of the Infrastructure Financing Facilitation Office (IFFO) in 2016. The IFFO brings together commercial banks, project owners, asset owners, sovereign wealth and pension funds, professional services firms, and external financial institutions to facilitate and package financing for BRI projects.

Similarly, MIC 2025 is dependent on knowledge and innovation transfer into China through joint ventures with advanced economy firms and Chinese firms securing finance to enter advanced markets. Once again, Hong Kong is the primary gateway through which these transactions take place.

The point is that China is profoundly vulnerable to any disruption or weakening of Hong Kong’s economic and financial role in helping move capital, currency, innovation, and know-how in and out of Hong Kong. This means the United States has considerable non-military tools and means with which to determine the pace and nature of escalation and even force a Chinese recalculation. In this context, the United States ought to draw up an escalating ladder of policy measures with which it can apply to target specific individuals, firms, sectors, and whole sections of the Chinese or Hong Kong economy. The aim is to target Chinese access to capital, currency, innovation, and know-how that takes place through Hong Kong.

To be sure, and with respect to countries such as China and Iran, the Trump administration has demonstrated that the unmatched importance of U.S. currency, capital, innovation and technology, and access to its market can be effective in creating considerable problems for the target regime.

However, the intent is not to destroy Hong Kong but to force Beijing to preserve and respect the territory’s institutions. This is why it is critical that the United States draw up a series of specific benchmarks and objectives that determine the degree to which Hong Kong’s rights under the Sino-British declaration are adhered to. Each action by Beijing to chip away at these rights entails a corresponding U.S. response that chips away at the capacity for Hong Kong to serve and help grow the mainland economy. The greater the Chinese offense, the higher up the ladder of escalation the United States reaches.

In explicitly pegging US escalatory actions to specific Chinese actions in Hong Kong, the chances increase that Beijing, rather than Washington, is blamed for leading Hong Kong down the road to destruction should it come to that. Immediately and completely stripping Hong Kong’s special status as permitted under the 1992 U.S.-Hong Kong Policy Act and treating it as if it were another normal province of China would be premature and narrow one’s capacity to escalate strategically, in addition to creating enormous disruption for residents and businesses who would probably direct their anger at Washington. Better to come up with a menu of measures which puts an ever-tighter squeeze on the ability of Chinese financial entities, firms, and individuals—and the broader mainland economy—to benefit from the U.S. and international economy.

Gradual escalation also increases the likelihood that internal pressure is given time to build on the Chinese leadership to step back or face accusations of overreach. All the while, expatriates and foreign businesses will be given time to make considered assessments as to whether and when they ought to leave. For humanitarian purposes, the door should be left open for Hongkongers to gain long-term or permanent visas in the United States if they choose to eventually flee and are proven to be genuine residents from the territory.

Regardless of how things pan out, the clear message to Beijing must be that the ability for China to use Hong Kong to service the mainland economy and underwrite Xi’s expansive plans will diminish whenever it moves to undermine “One Country, Two Systems.”

Even if what is occurring in Hong Kong cannot be reversed, the United States can ensure that the Chinese undermining of Hong Kong’s institutions occurs gradually and is greeted with much noise, not quickly and quietly. The latter would cause a resigned world to adjust and move on while the former would afford other governments and populations more time to contemplate Beijing’s broken promises, intolerance of different institutions and political culture, and reliance on coercion to achieve its ends. It is worth noting there are still many governments and elites in the region who naively believe that a Sino-centric order has no bearing on the way they lead their lives and carry on their affairs—one reason why they still see the BRI as nothing more than a platform for China Inc to ride in as a “white knight” to rescue their moribund economies.

For this reason, policy responses can still be useful in shaping the public and regional conversation even if they are little more than a nuisance to Chinese or Hong Kong officials, or cause embarrassment at worst. These include imposing sanctions on senior Chinese and Hong Kong officials, including Chief Executive Carrie Lam, for “implementing Beijing’s policies of suppression of freedom and democratic processes.” They also include forthright diplomatic statements or the Five Eyes countries—the US, Canada, United Kingdom, Australia, and New Zealand—condemning the postponement of legislative elections which were due in September for a year.